Make and Use a Slingshot 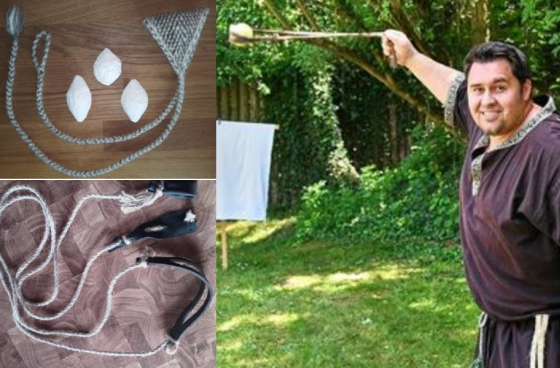 Course goal: Would you like to feel like David when beating Goliath? Feel the tremendous power of this seemingly simple weapon, make it yourself, and learn the technology from the two-time Vice World Champion. There is also the possibility of building special projectiles and acquiring historical and geographical background knowledge about the slingshot.

Course content: In this course we learn various spin techniques together, with time to practice and personal coaching. In advance there is an ample pool of various slingshots, with which everyone can try out their preferred sling design and length that best suits their personal favorite throwing style. There are several types of models to choose from, which can then be produced under instruction. With the help of ethnographic exhibits and true-to-original replicas from the Stone Age to the Middle Ages, an overview of the variation in the design of slingshots and projectiles is given.

Historical background: The beginning of the use of classic hand throwers is documented in the early Neolithic (approx. 7500 BC). The slingshot is distributed worldwide on all continents. The noose was (and still is) used as a tool for hunting, livestock and agriculture. They are also often used as an effective weapon for war purposes. Some examples over the course of the millennia: The Pharaoh Tut anch-amun had slingshots in his grave, the attackers successfully used them during the Late Bronze Age siege of Troy (approx. 1200 BC), the mythical Hercules used them in battle, and Biblical David also defeated Goliath in the late Iron Age. Hannibal and Caesar had slingshots as special troops, and many Celtic tribes were experts with the slingshot. In Byzantium it was used in the fight against the Huns, and was also known to the Vikings and Slavs. The use of slingshots enjoyed great popularity throughout the Middle Ages, right up to the French Revolution. Competitions with the slingshot are still held in several countries today.