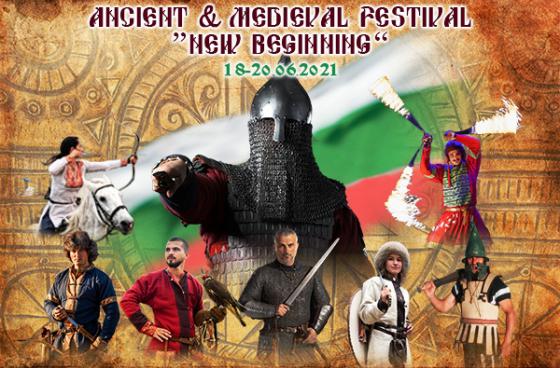 From the 18th to the 20th of June 2021, “Historical Park” will host the International Ancient and Medieval Festival “NEW BEGINNING. The festival is holding its second edition since the opening of the ”Historical Park” and will also commemorate the impressive 1340 years since the creation of Bulgaria, one of the oldest European countries.

During the festival, there will be reconstitutions and reenactments of the way of life, customs, culture and warfare of the people living in our lands, from the Antiquity and the glorious times of the majestic Thracian civilisation, until the fall of the Bulgarian medieval kingdom at the end of XIVth century.

In addition to the large groups of Bulgarian reconstitution and reenactment teams from all over the country, participants from Russia, Hungary, Poland, Slovakia, Romania, Moldova, Turkey and Serbia, including artists, musicians, warriors and craftsmen will also take part.

The official opening ceremony will start at 11.00 on the 18th of June. During the next two days, the program will include:

The longest and most spectacular day of the festival, the 19th of June, will climax with a massive musical concert, where the virtuoso artists of traditional Bulgarian music and dance will shine under the spotlights and the lights of the fire show.

On the 20th of June there will be a symbolic military march of 1340 steps, “following the steps“ of our ancestors from the old “NEW Beginning” of these lands in the year 681 until the current “NEW BEGINNING”.

A visualization of the event can be downloaded here.

Come and join us!

2nd International Competition of Historical Painting: The Cyrillic Script
1 May - 30 May
Bulgaria