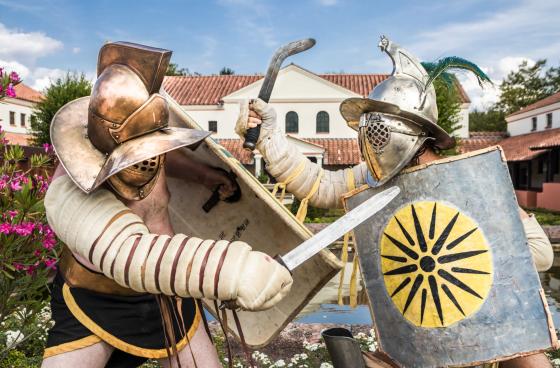 The gladiator myth – the stars of antiquity

Exciting highlight for the visitors of the Roman Days in the Villa Borg: The fighters of the gladiator school Trier e. V. provide insights into ancient tactics and technology. They show the difference between show and real fight - between "Hollywood" and reality. Following their presentations, courageous visitors can join in and take part in the training of the "ancient" gladiators. You can fight with a net and sword on a pole under guidance, as well as ask questions about ancient martial arts. During various training exercises, visitors learn what it means to be a gladiator ...

In addition to the fighters of the gladiator school, many other "Romans" are out and about on the grounds of the Roman Villa Borg on both days: Warlike legionnaires, bargaining traders and skilled craftsmen set up camp and present the ancient way of life. On both days, from 10:00 a.m. to 6:00 p.m., all participants show life in Roman times in all its facets.

For the first time, the 4th Vindeliker cohort pitches their tents at Villa Borg. In ancient times, the local auxiliary unit in the Großkrotzenburg fort secured the Limes as the border of the Roman Empire. The association shows the everyday military life of the auxiliary troops and their equipment - "Living, eating and fighting like the ancient Romans".

For the first time, accompany the LEGIO XXI RAPAX camp through the everyday life of the legionnaires. Experience field patrols, formation exercises and camp guards as well as a lively camp life and learn all about the legion, the Roman army and life as a soldier 2000 years ago.

A Roman army musician completes the camp. In the real life of professional trumpeters, he answers questions with sound samples of ancient signaling and military music.

The LEGIO XXII PPF COH I shows a small military camp with the associated craft and kitchen.

CRIMINA – crime ! was as relevant in antiquity as it is today, because taking advantage of criminals at the expense of third parties is timeless. The crimes of Roman times have many parallels to today: theft, counterfeiting, mugging, corruption, domestic violence and cheating.

The Familia Poppaea presents body and beauty care in antiquity. They report on body care, exude enticing scents, demonstrate cosmetics and show historical hairstyles... The subtleties of the production of various cosmetics are illuminated, one or the other hairstyle is tested on willing guests, and secrets of contraception are revealed.

The authentically equipped gladiators demonstrate - as in antiquity - "playing with death" and fight hard for victory. The Roman army displays its impressive military power. The peaceful everyday life of the legions can be seen and experienced in addition to the military aspects as well as civilian life, antique crafts, fashion, cooking and cult. The craftsmen revive ancient handicraft techniques with their tools, such as forging, shoemaking, bow making, cooking, baking, hairdressing, laying mosaics and weaving. The traders offer the typical goods for sale at their stands. One topic should not be missing from Roman life: the Vigilia Romana Vindriacum presents ancient winegrowing and transport in the Villa Borg.

The kitchens of the tavern offer culinary delights à la Apicius throughout the two days.

Opening times : Saturday and Sunday 10am to 6pm