The purpose of the association is to increase the knowledge about the Åland Island prehistoric epochs, primary the Viking time. Our goal is to emphasize the Iron Age by means of the reconstructed houses and a Viking ship, guided tours in the village, role play, re-enactments / camps for school kids, and banquets for companies, experiments and demonstration of crafts.

The Åland Islands are strategically situated in the Baltic Sea between nowadays Sweden and Finland have attracted travelers since the islands were first inhabited 6000 years ago. The Saltvik area was The Late Iron Age center of the Åland Islands. The center was most likely situated by the medieval Saltvik church in the middle of the richest Late Iron Age settlement area and at the crossroads of the Iron Age fairways indicate the importance of the site. The name Saltvik also indicate that this was the place were salt was traded.
Since year 2000 a yearly Viking market has been arranged in Saltvik. It has been a very popular event. Over the last years only the market has been attracting some 9000 guests among them some 300-400 traders and many international historical re-enactors with the Viking Age as their specialty. The success of the yearly market made a profound economic platform to develop the new “Viking village” very close to the Late Iron Age settlement area around the nearby Saltvik Church. Several buildings in different possible techniques were built over the years among them a longhouse, a cooking house, a smithy, a hall and several other working houses.
Different crafts are being presented regularly both for the guests and re-enacting participants. Courses in ancient handicraft are held on regular bas for members and other interested. Different ongoing project attract every year with many participants.
The Viking village is open to public only occasionally so please check out the website for events and opening hours. 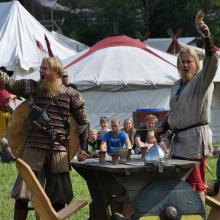 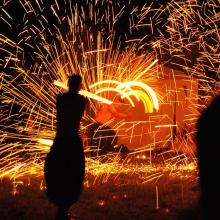 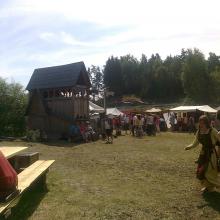 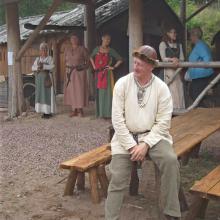 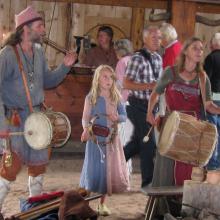 Tom Danielsson
Function:
Chairman of the board
E-mail:
info [at] fibula.ax