The Forcello Archaeological Park in Bagnolo San Vito, a few km to the south east of Mantova, rises around the remains of an important Etruscan settlement from VI-IV centuries BC. The archaeological excavations conducted on the site from 1981 to date, under the scientific management of Prof. de Marinis of the Università degli Studi of Milan, have brought to light, year after year, just a small portion of this settlement, but with a long stratigraphic sequence, defined in eight main phases.

The Park project came about from the need to safeguard at least a part of the settlement from insistent and destructive agricultural work. The experimental educational park pursues the objective of making the scientific results accessible to the public.

The visit starts from an elevated walkway that follows the track of ancient main street of the town. On the sides, didactic panels tell the story of the site, of life in Etruscan times, of contacts with contemporary peoples. Visitors can also enter Loom Weight House, the life size replica of an Etruscan house by the park entrance.

The original burnt down in about 450 BCE. What was found in the house is associated with crafmanship and food storage. This may imply that the building was used as a kind of warehouse cum workshop. The walls of the house were in wattle and daub, some of which has survived. It was made by weaving a lattice of flexible branches alternately between a pole frame (wattle). They were then daubed wet with clay, which was smoothed down and plastered. Nothing remains of the roof, completely destroyed during the fire. It must have been made from perishable material, as several layers of thatch. It may instead have been made from wooden planking or shingles. The floor was of beaten earth.

One hundred and fifty doughnut loom weights were found in the building. They would have hung from a large vertical loom. It’s from them that the house takes its name. The loom would have stood on a platform on the floor to make weaving easier.

In addition to Loom Weight House, in the park there are also two kilns for pottery firing (Roberto Deriu- Gesti Ritrovati), examples of artisan activity certified at Forcello.

At the end of the walkway, visitors can see the excavation area, the heart of the park.

For schools of all levels, we offer laboratory activities on various themes concerning the craftsmanship in the time of the Etruscans and the profession of the archaeologist. 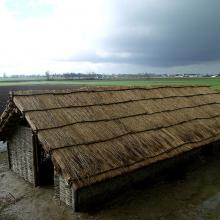 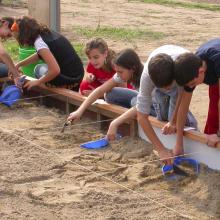 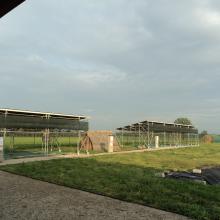 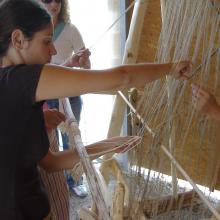 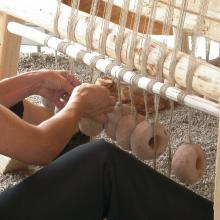 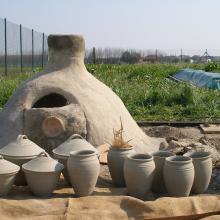 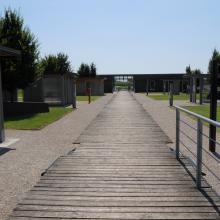 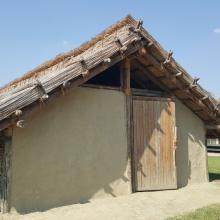 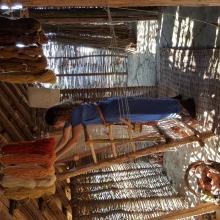 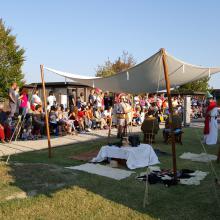 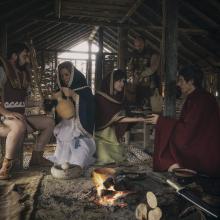 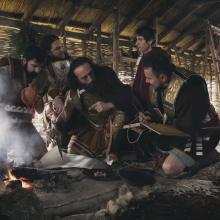 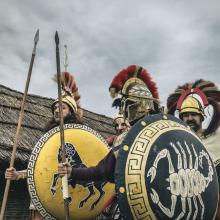 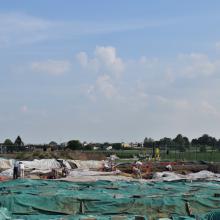 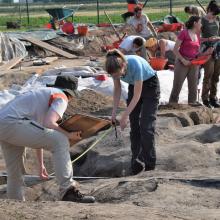 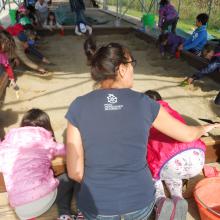 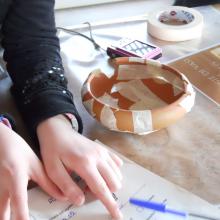 Born in Mantova 26.07.1968. In 1994 she graduated in Classics at Bologna University with a research thesis in Near East Archaelogy and History of Art, “The hero fighting with the lion in the First Millennium B.C. Near East Art” (supervisor prof. S. M. Cecchini). Then, she took part in excavations in Mantova commissioned by the Lombardy Archaeological Authority.
From 1997 to 2004 she worked in a pottery workshop, where she could learn pottery technology and cooperate with schools and local museums using clay in educational process.
She has worked since 2005 as professional archaeologist in emergency excavations in Lombardy, Veneto and Emilia Romagna (Northern Italy) in various contexts, especially prehistoric and protohistoric.
In 2006 she began to work in Forcello Archaeological Park as an educational operator. She also worked as a guide in archaeological exhibitions and collaborated occasionally in setting up educational labs with the National Archaeological Museum of Mantova.
She is currently the part-time curator of Forcello Archaeological Park in Bagnolo San Vito (MN).