Reaching Out to the Communities We are Here to Serve: Developments at the Scottish Crannog Centre

The Scottish Crannog Centre is a small archaeological open-air museum on Loch Tay in Perthshire. It originally operated as a visitor attraction, giving people a glimpse into life in the Early Iron Age through demonstrations of ancient skills and guided tours of a reconstructed crannog – loch dwelling – based on discoveries and excavations made by the Scottish Trust for Underwater Archaeology.

Building upon the successes of the past two years, we will be looking to the future with an ambitious but much-needed plan: the need to relocate the Scottish Crannog Centre altogether to a new site. This has become an urgent priority in recent years.

Since the end of 2017 the centre has been under the directorship of Mike Benson, who has a strong background of having led struggling museums through transformations driven by a keen sense of social justice, resulting in thriving and healthy organisations. Having previously delivered this successful model at Bede’s World Anglo-Saxon Museum and Ryedale Folk Museum, Mike has implemented it at the Scottish Crannog Centre with clear results. It is demonstrated by an embedding of community engagement into the heart of museum output and it is an ethos which Mike believes should be the backbone of everything museums do.

This approach has resulted in many improvements at the Crannog Centre including the development of a broad and diverse spectrum of social and professional partnerships, establishing a popular volunteer and student internship programme, the development of an apprenticeship scheme, and the creation of a dedicated curatorial role.

The collections at the Scottish Crannog Centre number up to 1000 items in total. In the past two years the collection has been inventoried, photographed and safely secured in good storage conditions at the centre. As there was no space to create a separate collection store, we have integrated a visual display storage unit into our museum.

We are aware that a sea of boxes might not be the most thrilling of displays, so we have created an ‘Open the Box’ project. Community groups, local organisations and schools are invited to choose a box from the storage unit and they will examine the contents with the curator. The group will then co-curate the display of the artefacts with the curator. The display will last for one month, after which another group will choose a box.

The ‘Open the Box’ project is part of a wider museum refurbishment which took place in 2019. New display cases now contain object-rich displays themed around domestic life on the crannog, construction skills, metalworking and farming. For almost all these objects, it is the first time they have been publicly seen and displayed since they were first excavated.

Again, mindful of our commitment to social justice and public engagement, we did not do the museum refurbishment in isolation. Rather, we invited local residents to co-curate the new displays with us and our museum text contains thoughts from these people as well as historic and curatorial information. We also needed some new illustrations for the museum and rather than appoint an established artist, we commissioned a student from one of Scotland’s art colleges to provide us with images which capture the atmosphere and sense of place and time that the crannog dwellers occupied, 2,500 years ago. Our collaboration with Sebastiano, the art student, was so positive that we invited him to create another set of images that would capture the imagination of children visiting the centre.

‘The Bridge that Connects Communities 2,500 Years Apart’ was the name of a special exhibition we mounted in 2019 alongside the museum refurbishment. The special exhibition was funded by the National Heritage Lottery Fund. Amongst our collections are two items which have given us a rare insight into cultural life in the Early Iron Age. Life on the crannog during this time was that of an oral tradition, without the written word, and we usually rely upon illustrations – decorative pottery, sculptures, murals, etc. – of singing and playing musical instruments, to give us clues about music in prehistory. Actual artefacts, however, rarely survive and when they do they can be difficult to identify and are usually in very bad condition. However, we know from the surviving remains of bronze horns and trumpets that Iron Age people possessed a high level of technological ability and would almost certainly had been able to make stringed instruments as well.

The two objects found at Oakbank Crannog are unique in their survival. One is a short tube resembling a whistle. Measuring less than 57mm in length, it may have been a practical tool, used for signalling, hunting and herding. Hollowed from blackthorn or dog rose, a D-shaped notch forms the sound-hole. There is no mouthpiece or ‘fipple’ but experiments with replicas showed us that a small amount of beeswax inside the notch enabled a whistling sound to be produced and at least two distinct notes could be played.

The other artefact is a finely notched piece and resembles part of the bridge of a lyre. It is similar to the lyre bridge found at High Pasture Cave on the Isle of Skye which was also dated to the Iron Age. The Oakbank ‘bridge’, however, had been deliberately broken at one end when it was still unfinished, so we do not know its original length. It could even have been a discarded trial piece. The planned form and precision of its manufacture, though, are entirely consistent with the subtlety exhibited by later lyre finds, and by contemporary instruments from Classical Greece. Unlike the assumed practical purpose of the whistle, however, the ‘bridge’ suggests a poetic tradition and the enjoyment of songs. It is 63mm long and the notches were carved with precision and skill.

The new exhibition on prehistoric music was co-curated with music archaeologists Dr Graeme Lawson and Dr John Purser and opened to the public on 5th October 2019. It was accompanied by a vibrant, year-long programme of musical events delivered throughout the 2019 season. From whistle-making workshops delivered by local crafters to the haunting melodies of evening fireside performances on the crannog, the packed and inclusive programme embraced our ethos of community engagement and ensured that the wealth of academic rigour which informed the project was made accessible to all. The highlight of the project’s event programme was a week-long residency by music historian and performer Barnaby Brown, who worked with our local primary school children, who made their own ‘biscuit tin’ lyres. They also learnt and performed songs from antiquity.

The past two years have seen us making the collections accessible to all our visitors, enhancing our public profile and building up essential relationships and partnerships. We believe that expertise, knowledge and passion – the abundance – is a two way process but essentially it is on the outside of any organisation. We, as museums, have to embrace and welcome it in through our doors if we are to benefit from it.

Building upon the successes of the past two years, we will be looking to the future with an ambitious but much-needed plan: the need to relocate the Scottish Crannog Centre altogether to a new site. This has become an urgent priority in recent years. The existing site has many faults: it is small, with no Learning Centre or café, and many of our structures are in a state of disrepair. We also have constraints imposed on us as a business by the owner of the land on which we are sited. Essentially, the building which houses the museum is not fit for purpose and needs to be replaced entirely.

The decision has therefore been taken to find a new, larger, site for the Scottish Crannog Centre where we can fully embrace experimental archaeology and develop an Iron Age open-air museum. Embracing the concept of social justice, the new site will offer a range of opportunities for elements such as: a woodsman’s yard; micro-hubs for start-up businesses; delivering the entire business on a circular economy model; and much more. Key to the whole site will be the new museum showcasing the Crannog centre’s collections, two or three crannogs in order to accommodate school groups properly (along with a dedicated Learning Centre) and an Iron Age ‘village’ consisting of a range of timber framed, thatched round houses and a farm.

The Scottish Crannog Centre is at the start of this very exciting journey and we welcome the chance to share our vision with EXARC members. 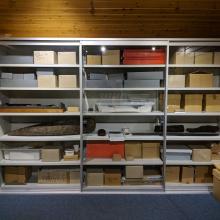 Fig 1. The collections at the Scottish… 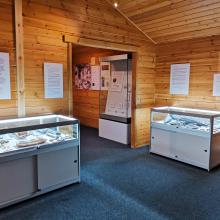 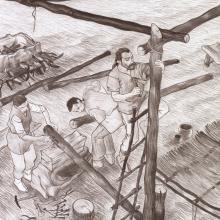 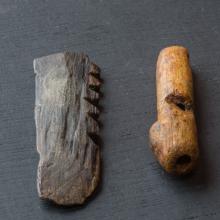 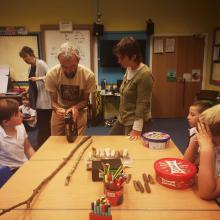 Fig 5. Barnaby Brown, who worked with… 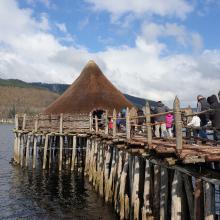 Fig 6. Group tour at the Scottish… 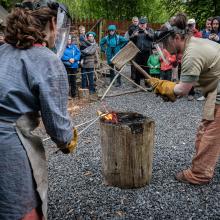 Fig 7. Demonstration at the Scottish…