Bronze objects can be damaged in many ways, for example during casting or during their time of use. Often this damage was repaired using various techniques. In this paper, some examples of ancient repairs and their techniques are described and illustrated with examples published in the literature.

The casting itself, and in particular the succeeding
reworking and polishing of the surface of the bronze was a costly and timeabsorbing
job. It is thus obvious that the value of bronze was relatively high,
and repairs were made in case of any damage to the object.

In this paper some examples are given of ancient repairs and the techniques of making joints on archaeological bronzes from the Mediterranean area (Dooijes 2000). Techniques used to make repairs were basically the same as those used for joining complex-shaped pieces in bronze. Life-size bronzes, which appear from about the sixth century BC in Greece, were almost always joined together from separate parts. Many bronze objects, from small figurines to large bronze statuaries, are known to have been repaired at some stage of their lifetime.

During the process of casting, many problems can become apparent. Gas bubbles or irregularities in the mould can damage the surface of the bronze object. This was often the case, which meant that most of the time the surface had to be repaired. For this purpose, bronze patches were used. These patches could be made to fit the damaged areas exactly. Figures 1 and 2 show some of these patches, and the methods that may have been used to fit them into the irregularities on the surface of the bronze (Bol 1985). The damaged areas were shaped first, then the patches were hammered into the openings. When joining different parts of a bronze object, we distinguish between mechanical and metallurgical attachments. Mechanical attachments consist of interlocking parts. This is achieved by hammering, twisting or bending the separate parts in the area of the joint. Very often a metal dowel or a rivet was added to the joint to provide extra support (Haynes 1992).

In metallurgical joints, molten metal is poured between the parts to be joined. The added metal can be a solder, which is a metallic alloy with a melting point lower than the bronze itself. Hard solder, an alloy of copper with tin or silver, has a relatively high melting point. The use of this results in a better fusion of the solder and the bronze. Soft solder on the other hand consists of a lead-tin alloy and has a low melting point. It is easier to apply and was often used to attach small parts, like the handle of a bronze amphora. Lead-tin solder does not have the strength to repair large and heavy objects.

The same types of solder are still often used today. Therefore, it can be difficult to distinguish modern restorations from ancient repairs, and for this reason it can be hard to infer the period the restoration took place. It can as well be difficult to recognise a normal attachment made in the foundry from a later - still antique - repair. In these cases, we sometimes depend on chemical analysis of the bronze to note the difference in composition of separate parts.

The other important metallurgical technique of joining is called fusion welding. In this technique, molten bronze is poured onto the area of the joint, heating the bronze surfaces to be joined. When the melting point is reached, the surfaces of the joined areas will melt and fuse together as well as with the added bronze. In Figure 3, different examples of such attachments can be seen. The parts are first joined provisionally, then wax is added to the open area and a mould is built around it. After this, the wax is removed and the molten bronze is added.

Figure 4 is an example of a bronze statue that was repaired in antiquity. The statue was found in 1882 in Sicily, in a ceramic coffin, and is dated in the sixth century BC. The ancient repairs on the statue were described by Anna Maria Carruba (Carruba 1983). In modern times the statue was restored first in 1928, and then again in the 1980’s, when it was taken apart completely. An X-ray of the statue showed a lot of patches on the surface of the bronze, particularly just above the knees and around the waist (See Figure 5).
At these places metal strips have been added using fusion welding. Apparently, the repairs were necessary because of the porosity of the bronze in these places. Also, the fact that the walls on these locations were only 1 or 2 mm thick, as opposed to an overall strength of 4 or 5 mm at other parts of the statue, may be an explanation for these repairs.

The casting-faults in both areas were repaired by casting in new parts about 4 cm high. Doing this, however, the ancient artist made some mistakes. The drawing in Figure 6 a and b shows the left leg, just above the knee, with the possible place of a crack indicated. The broken areas must have been filed back to facilitate casting in the new part. After this was done, both parts were joined again, leaving a bigger space open than was needed, as compared to the quantity of metal that was removed before. Following the lines of the upper sides of the leg downwards, it can clearly be seen that the lower part would have to move upwards about 2.5 cm to correspond with the upper part. The same happened to the waist of the statue, leaving the repaired statue about 5 cm larger than it used to be!

The Chatsworth head of a female figure with a probable height of about 2 meters, has been found on Cyprus and can be dated to 460-450 BC (Mattusch 1988, 154-156). The head is decorated with incised hair and has separately attached curls. These curls and a small central knot on the back of the head were soldered in place.

On the top of the head a rectangular repair is visible, consisting of a patch that was hammered in place. The small patch was engraved in the same manner as the surrounding bronze of the head, by which the artist tried to make the repair invisible. At the right side of the neck is another rectangular patch, worked into an irregular break that could have occurred after casting, maybe still in the workshop. A big hole at the back of the head has not been repaired. Probably this damage occurred later.

Figure 7 shows a small Greek figurine of a bird, dated to the eighth century BC. It was described by Lechtman and Steinberg (Lechtman & Steinberg 1970, 5-35). The tail of the bird was broken in antiquity and repaired, but it broke again recently. When the tail broke off, it left an uneven area at the rear of the bird. The broken edge of the body was filed down, to receive the new tail which had to be cast on, probably using a wax model. Because the rear of the bird was very fragile, the attachment had to be strengthened by some extra mechanical means. Therefore, as can be seen in Figure 8, channels were dug into the clay core of the bird’s body, wherein the molten metal could flow and solidify. One of these channels runs along the outer side of the core, near the metal of the body. When the casting of the new tail was made, the molten metal fused with the bronze at this place of the bird’s body. Another channel was dug at the lower end of the new tail, but the bronze that solidified here only formed a metal pin. The result is a combination of a mechanical and a metallurgical attachment.

Finally, the study on ancient repairs could also help us to further understand the value of bronze objects. The casting itself, and in particular the succeeding reworking and polishing of the surface of the bronze was a costly and time-absorbing job. It is thus obvious that the value of bronze was relatively high, and repairs were made in case of any damage to the object. We know of several examples from ancient literature in which the repair of bronze objects is mentioned. In a fourth century BC lawsuit, the owner describes a valuable bronze vessel-stand and states: “I wished to have it repaired, and sent it to the bronze foundry, for it was made up of different parts, as it had the faces of satyrs, and the heads of bulls worked on it and the manufacturer makes many articles of furniture in the same or similar style” (Vickers & Gill 1996, 99). At the same time however, inscriptions sometimes mention that offerings at a temple were melted down or replaced with larger ones because they were useless or in need of repair (Vickers & Gill 1996, 56). Probably, a large number of bronze objects were lost this way.

These were some examples of repairs on ancient bronzes, which I came upon in literature. More research is needed, as the subject of ancient repairs has generally been neglected. It would be best to take a closer look at small as well as large bronze objects. Most of the time, small repairs like patches have been noted already. It seems, however, very likely that larger repairs occurred more often than is generally assumed, because they have not been recognised as such. Only by close investigation and with the help of radiographs and chemical analysis of the bronze, it would be possible to recognise any repair that may have been made. This would provide a lot of information about the various restoration techniques.

I would like to thank M. Dooijes, dr E.H. Dooijes and dr O.P. Nieuwenhuyse for editing the English text of this paper. I would also like to thank N. Meeks for revising the text.

LECHTMAN, H. N., and A. STEINBERG, "Bronze Joining: A Study in Ancient Technology", Art and Technology, a Symposium on Classical Bronzes, Massachusetts, pp. 5-35, 1970. 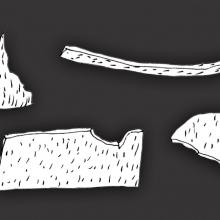 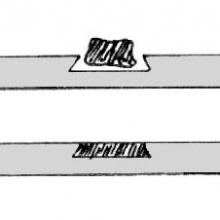 Fig 2. How to fi t patches into bronze… 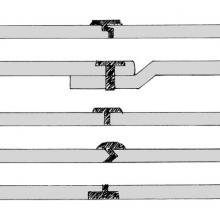 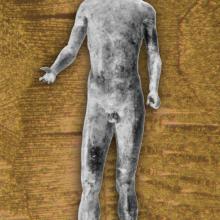 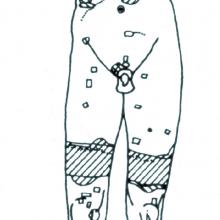 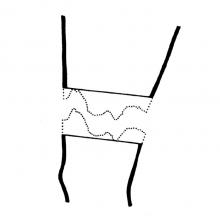 Fig 6a. Casting repairs, details of the… 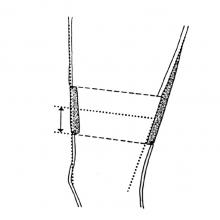 Fig 6b. Casting repairs, details of the… 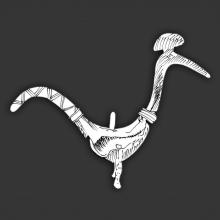 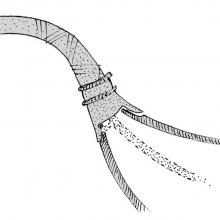 Fig 8. Detail of the broken tail of a…

Killing the Cauldron: Experimental Research on Dented Bronze Cauldrons from the (post)Medieval Period
Replica of the Knife 2165 found in Flixborough a Late Anglo-Saxon Period Knife with an Inlay of Twisted Bronze and Silver Wires
From Wax to Metal: An Experimental Approach to the Chaîne Opératoire of the Bronze Disk from Urdiñeira
Montale, the Terramara Lives
Now we’re Cooking with Gas! How Experimental Archaeology Challenges Modern Assumptions about Metal Recycling