In April 2010, a conference took place at Olevsk, which was a good occasion to go to Kyiv and meet Dr Andrey Petrauskas of the Institute of Archaeology of the National Ukrainian Academy of Sciences. The main purpose of the visit was to discuss the plans for reconstructions at three archaeological sites, to set it in perspective of other reconstructions elsewhere, to lobby with the mayors in those cities and to involve the Shevchenko University in Kyiv in the process by giving some lectures to archaeology students.

There are many good examples of well executed experiments and reconstructions in Slavic countries, it is just a matter of connecting and exchanging thoughts.

The conference in Olevsk was titled The population of the forest area in Western Europe: system of settling, economic and culture and was hosted by the National Academy of Sciences, represented by Oleksandr Petrovitsh Motsja, and the mayor of town, Anatoli Vasilovitsh Povar, who took great interest in the subject and was happy with the attention being given to his city and surroundings. In summer 2010, excavations started here at the local stronghold. A possible reconstruction of parts of the settlement could safeguard the rest of the site against robbers, create a kind of understanding with the local population, be a territory for experimentation and, finally, could be a place for tourists to visit.

As a conference excursion we went to the ‘Kaminne Selo’, the ‘Stone Village’. This geological phenomenon gives a whole new dimension to megaliths. These stones are so large that they can hardly be used to construct tombs. This great site is barely accessible to tourists. In many respects, the area around Kyiv is unexplored territory for tourists, foreigners do not leave the capital and local people hardly make any day trips.

We then went to Novograd-Volynsky. Here too, a stronghold was detected and the plan is to reconstruct parts of it. The site is literally next to the international highway from Warsaw to Moscow and a simple exit with gas station, restaurant and archaeological open-air museum could be a hit. It is in a similar situation as the Archéodrome in France and the M3 museum near Polgar in Hungary: what about commerce? Can we not keep it scientific only? If anything is reconstructed, it should be themed with the stronghold time period, and not for example the 19th century. The local population is not comfortable with looking back to the 19th century: they feel that this part of the past was primitive and nothing to be proud of or celebrated.

The local museum director, Olena Zhovtiuk, kindly invited us to her house. She has trouble making ends meet in her museum: how to get glass in the window frames, or a front door which can be locked? Climate control systems are not even mentioned. An archaeological open-air museum at Novograd would possibly be dependent on her museum, and act as a satellite museum like there is in Százhalombatta, Hungary at the Matrica Múzeum & Regeszeti Park.

We had a meeting in the city hall, which also houses the district government, with the persons in charge for culture. The main questions were about where funding should come from: city, district? EXARC could offer access to a network of dozens of colleagues across Europe, but what would be the cost of such networking?

The last visit was to Korosten. Visiting the local museum, the city’s rich history unfolded. Not only was the local tribe a serious contester against the Kyiv tribe, the city has had a colourful history with ups and downs, like for example being a battlefield in the Stalingrad war. Korosten is also a city which, to cut a long story short, is in the ‘voluntary evacuation zone’, as defined after the Chernobyl nuclear disaster, which took place over 25 years ago. It is about 50 kilometres away from the power plant. We were visiting on the exact day of the National Commemoration Day of the disaster. Before the accident, Korosten counted 85,000 inhabitants. Now, after a deep dip in population, the number has grown again to 60,000. Is it ethically correct to construct an archaeological open-air museum here, as a tourist attraction? I had decided to try and discuss this with my colleagues, both those in the West and those in the Ukraine. The fact is that millions of people live in an area that used to be ‘under the smoke’ of the reactor, including Kyiv. They will not move, and it is true that many close their eyes to the possible long-term effects. As some people say here, drinking enough vodka will not wash away the radiation. What to do if these people are not going to move? Chernobyl affects their lives, but there are many other issues, often regarded as more important. The mayor of Korosten, Vladimir Moskalenko, made much time available for us and discussed in detail why an archaeological open-air museum would be important in this region. Of course, they would keep sponsoring the experimental conference. The mayor was eager to find out about the international network where knowledge could be shared – money is an issue as always, especially in the current financial crisis, but a first step could be to invite colleagues over to the conference here, and they themselves taking part in EXARC and other conferences.

A few days later, at the Shevchenko University, I gave a paper about experimental archaeology and another about archaeological open-air museums. Both were combined with a selection of video material on such topics as bronze casting, iron smelting, the Lejre Iron Age Village, the quest for gunpowder by the Middelaldercentret in Denmark and Bruce Bradley knapping flint. The presentations were somewhat expressive in a way they were not used to; living history is hardly known here, and experimental archaeology is usually executed under (open-air) laboratory conditions. My stories were not advertising for ‘light coming from the West’. On the contrary, there are many good examples of well executed experiments and reconstructions in Slavic countries, it is just a matter of connecting and exchanging thoughts.

We visited several museums, among others in Vyshgorod. While the national museum buildings are in good state, like temples of knowledge, the local museums are often neglected buildings in disrepair and missing conservation equipment. At one museum we intended to visit the door was opened by the warden, who stated that there was no staff there, so no visitors were allowed to see the exhibition. My feeling tells me that the staff was not off to lunch, but had been dismissed a few years earlier. On paper the museum exists, but in reality it does not.

One day we spent at an archaeological camp in the forests near Khodotsivka. Excavations have been taking place here for over a decade, and students and staff camp in the forest in tents, old wagons, all equipped with electricity. The site is also used for some replicative experimentation. One of the themes they had a lot of experience with, partly based on ethnographic research, is bee farming in hollow trunks. At the archaeological camp a pottery kiln, based on a 10th century model is being fired regularly. Petrauskas cooperates in these matters with Igor Anatolijovitsh Gotun of the archaeological institute of the National Ukrainian Academy of Science.

On my last day, we visited the National Ukrainian Ethnographic Open-air Museum at Pyrohiv, just outside Kyiv. Parking was unclear, there was no clear cash desk, around the entrance was an organised chaos and a shop where one could buy a museum guide, souvenirs or postcards was absent as well. The guidebook sold out about five years ago and never got reprinted.

Our first stop was the blacksmith’s workshop. Apparently the building was not transplanted from elsewhere in the Ukraine, but simply a modern blacksmith’s shop including the modern tools you would expect. Here we met with Boghdan, an internationally renowned blacksmith who was making final preparations for a blacksmith festival with 400 attendants to be starting in a couple of days.

There was very few museum staff, and the ones around are not recognisable with a uniform, badge or such. There have been major budget cuts since the fall of communism. For example, there used to be a ‘construction unit’ with specialists in ancient building techniques, with both a craft and scientific background. They used to be the best of their kind in the Soviet Union. These have been fired, and if any work needs to be done, it is postponed and finally done by outsiders who are mainly trying to earn a good income and are not necessarily interested in the museum.

About 20% of all houses can be entered, while in the rest one can glance behind a rope at still lives of furniture. The only living history here takes place in the few churches which are open where a mass is served (real or fake?). Taking pictures inside the houses is prohibited almost everywhere. In one specific case, there was also a sign prohibiting women walking in their high heels across the loam floor.

The museum is very large and is composed of about 300 buildings. It is unclear how many people visit this museum, but on the national holiday 1 May 2010, the museum counted 4,000 visitors. A few small shops exist with the obligatory ‘craft’ souvenirs like cloth nobody needs. Probably most of the shops selling food, drink or stuff are privately owned and the museum sees little revenue of this.

A special area in the museum is the village of the 1970s and 1980s. This refers to the Soviet times and depicted the life style of the period when most of this museum was constructed. Obviously, it is a ‘model village’ of about 35 free standing houses, all furnished, but, for example, they have no religious symbols on the wall; in present day Ukraine, you will probably find not a single house without such items. This ‘modern village’ probably served as major contrast to the rest of the museum, which my guides keep referring to as ‘primitive’. Several sources refer to this open-air museum as having some replica buildings, besides the ones that were transplanted. This certainly counts for the Soviet village: these houses, which are referred to as from Odessa, Kharkov or elsewhere, have never stood there, but were invented here in Kyiv. The Soviet area only has luxury freestanding houses, no shops, no church, no pub or whatsoever. It is weird to observe a past that never existed as such. 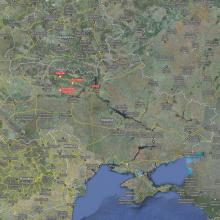 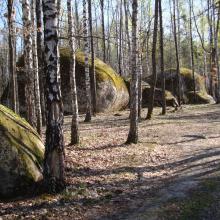 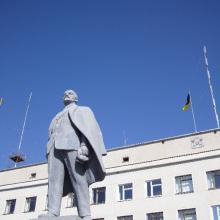 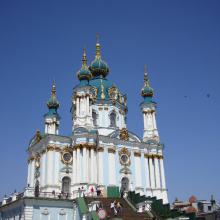 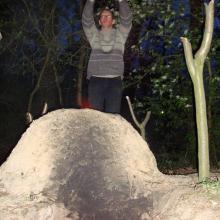 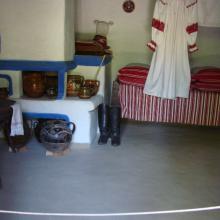 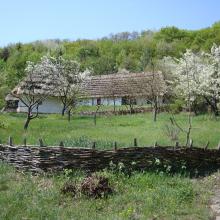 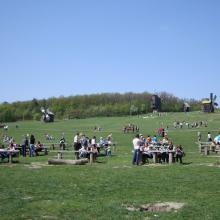 Fig 9. Ukrainian "village of the… 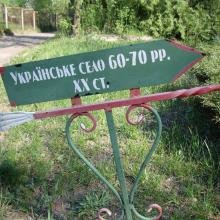