Oakbank Dog Rose: A Working-model of an Iron Age Wooden Whistle from a Loch Tay Crannog

In 1980 a small piece of worked wood was discovered during excavation at Oakbank crannog in Loch Tay, Scotland. It was interpreted as a whistle by Nick Dixon. While there are several other Iron Age artefacts which have been interpreted as whistles, in Britain, this is the only one currently known to the author which is made of wood. This paper describes the manufacture and sounding of a model of this Iron Age artefact in order to explore its sonic range and establish whether it may be classified as a whistle.

In his PhD, Nick Dixon wrote that the “most evocative find is a small whistle just over 5 cm long made of dog rose or cherry…a one-note whistle may point to a use for signalling or attracting attention.”

Great variety exists among the late prehistoric crannogs of Scotland, and not all match the standard image of a single island roundhouse (Cavers, 2012, p. 170, p. 181). In short, they are islands which are completely constructed, or largely altered, by people (Crone, 2012, p. 140). Upwards of 400 sites are classified as crannogs and have a remarkably wide distribution, and perhaps an even more remarkable preservation of organic material (Crone, Henderson and Sands, 2001, p. 55).

In his PhD, Nick Dixon wrote that the “most evocative find is a small whistle just over 5 cm long made of dog rose or cherry…a one-note whistle may point to a use for signalling or attracting attention” (Dixon, 1984, p.231). In Appendix C, discussing the analysis of wood specimens he adds that ‘due to delicacy and shape only one section was unobtrusively taken. It showed very large rays (up to 60 cells high) with sheath cells and also some smaller (1-3 serlate) rays, suggesting the species’ (Dixon, 1984, Appendix C; see also Collinson, 2020). This provides identification as either Rosa or Prunus spinosa – most likely dog rose. The assemblage within which the artefact was found was dated to 500BC, but the whistle was not radiocarbon dated.

Comparative artefacts of approximately the same size and age are known. One example from Dunagoil vitrified fort, Isle of Bute is made of bone (Harding, 2004, figure 4: 5, https://www.butemuseum.org.uk/iron-age-bute/), and another from Coddenham Iron Age settlement, Suffolk (Meredith, 2014) is made of antler (See Figure 3). A second possible antler example was found at Meare Village East. John Coles classed this last object as an antler handle.

Dog rose, a wild rose variety, has a soft pithy centre, similar to elder. The removal of this centre forms a small wooden pipe. I collected a 50 cm piece of dog rose in the summer of 2016 and left it to season. I had not worked with dog rose prior to this experiment, but I have considerable practical knowledge of working with elder. The soft pithy centre of elder is removed with far greater ease if it has been thoroughly dried.

All work was carried out using a knife made by Dave Budd, Blacksmith and EXARC member. I assume here that a plain iron blade was the tool used to make the original whistle, given the date of around 500 BC, for the find context. The dog rose was cut to an approximate shape, choosing the section with a small branch (See Figures 4-7). This was done since the photograph that I initially worked from, supplied by Barrie Andrian, showed what appears to be a small branch, near the duct of the whistle.

I used the knife to cut a small piece of willow into a tool specifically for pith removal. Over the years, I have used plain sticks or pieces of bamboo, but here I used a design recorded among the Chumash Native Americans of California, as described to J. P. Harrington by Chumash Fernando Librado towards the end of the 19th century (Campbell, 1999, p.239). This was specifically used for the removal of pithy material from elder, during the manufacture of flutes. I experimented with this tool here because it had a simple design that was suitable both in terms of the task it was used for, removal of pith, and the function of the finished artefact, a sound-making device. It consisted of cutting the top of an appropriate diameter branch to a gable shape, then removing a v-shape between the gable ends (See Figures 8 and 9). This works extremely well, when inserted and twisted for the removal of the pith. Having poured some sand inside the pipe, to act as an abrasive, I then rubbed it with a small branch so as to remove any leftover pith. A smooth bore improves sound quality.

After the removal of the pith, I cut a small hazel branch to fit the bore of the whistle (See Figure 10). Finally, I trimmed off the bark, so that the finished whistle resembled the original find. The images of the find show a little bark just below the duct (See Figures 11 and 12). I assumed that the whistle may have originally had bark covering it but that it did not survive the time spent in the loch. I have chosen here to create a finish closer to the find as it survives today.

In this form, the whistle does not sound when blown. However, by covering the opposing end from where it is blown with a finger, one may create a loud whistle and slightly alter the pitch by adjusting the finger. The recording accessible below demonstrates the type of sound this whistle could have made in this form. Figure 13 shows the image produced using the program Sonic Visualiser of the .wav file. This shows the frequencies produced by the Oakbank model. With the end hole completely covered the pitch is 2540 Hz equivalent to D# 6 +35c. Harmonics are visible at 4952 Hz, again at 7536 Hz, and at 10077 Hz. Blowing slightly harder raises this to 2713 Hz, equivalent to E6 +49 c, with harmonics at 5459 Hz, 8182 Hz and 10938 Hz. The series of short pips have a frequency of 2627 Hz, E6 -7c, with three distinct harmonics. On the right hand side of figure 13, we see a low dip 2239 Hz, C # 6 +50 c, which rises rapidly to 2670 Hz or E6 +22c rising again to 3488 Hz, A6-16c, before decreasing to 3316 Hz, G#6 -3c and finally dropping to 2627 Hz, E6 -7c. Again, three sets of harmonics are visible on the visualiser image. In light of these results, I consider that the artefact functioned well as a whistle although whether this object served for making a call or as a child’s toy is beyond the scope of this paper. A subsequent project will explore the distance the sound travels. 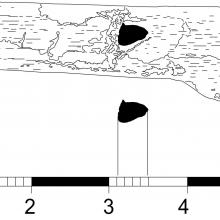 Fig 1. Oakbank whistle (drawn by the… 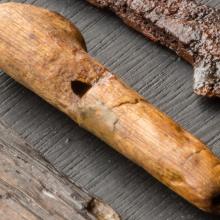 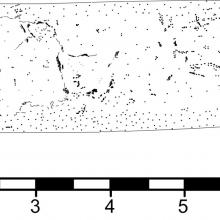 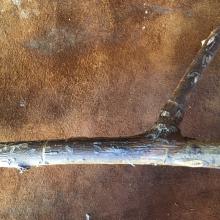 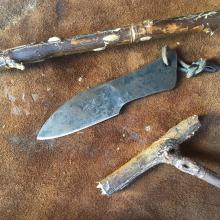 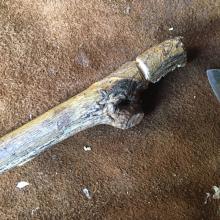 Fig 6. Removal of side branch. Photo by… 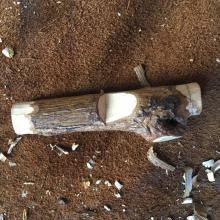 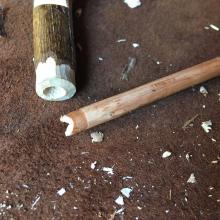 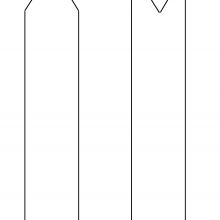 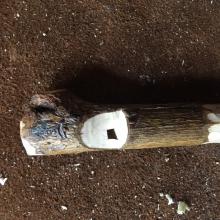 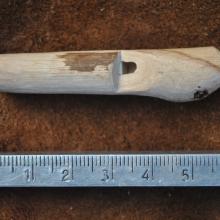 Fig 11. Dogrose whistle after the… 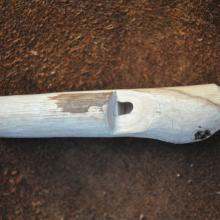 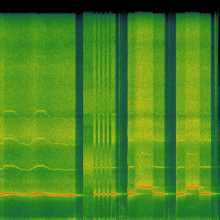 Bone Pipes with Parallel Tone Holes. Materials from Medieval Poland (until the End of the 12th C)
Bottle Gourd as an Implement for the Poor in Roman Italy
Experimental Research on the Neanderthal Musical Instrument from Divje Babe I Cave (Slovenia)
Acutus’ Eagle Bone and Two Bone Tubes with Holes Found in A Roman Fleet Base in The Netherlands - About Signalling Whistles and Animal Calls
Anatomy of Prehispanic Bells - Study of an Ancient Lost Process