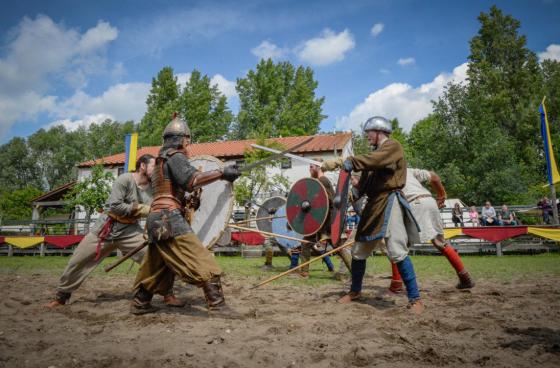 Visit the Viking encampment and browse the market stalls. The Viking Festival is this year for the 24th time!

There are plenty of stalls selling everything from jewelry to clothing, soap to honey wine, weaponry to toys. The Vikings also do not like to sit still, they like to tell about daily life in the early Middle Ages. At the weekend they give a demonstration of the different weapons and clothing that were used and worn by the Vikings. The Vikings are industrious farmers, skilled craftsmen, shrewd merchants, brave fighters and above all, intrepid explorers.

The Vikings have left a great impression until today. Many place names, especially in England, therefore come from the Scandinavian language. Jewelry and utensils used by the Vikings have been found all over Europe. People also wrote about the Vikings. The English thought they were strange – before a big fight they spent hours washing themselves, combing their hair and plaiting beards. The Vikings believed that if they died in battle, they could go to Valhalla. A place where there was eternal partying and fighting. And then you better look a little neat!

Vikings in Dorestad
The old school poster from 1927 by JH Isings is well known: the proud Viking stands in beautiful gear on the gangway of his ship. His ruddy-grey mane flutters in the wind. In the background the horizon burns: Dorestad goes up in flames. Howling Vikings return to the shore, heavily laden with looted treasure.

We are now almost a hundred years later and we know better. That's not how it went with Dorestad.

Dorestad was an emporium, a trading place of international allure. It flourished under the Frankish rule, from the mid-eighth century and especially during the reign of Charlemagne. The population of those days is estimated at many thousands. Traders came from all over Europe. The later Vikings also gladly offered their wares here and stored cargo that was brought in from the hinterland or the (sometimes far) south.

From 834, Vikings came to Dorestad with less peaceful plans. Then the position of the place was already weakened. The river had taken a different course, further from the old bank, and was less navigable. The government of the empire was less structured, the authority had slackened. Possibly other trading centers were already emerging. Perhaps the Viking attacks were even part of a strategic plan by competing rulers. Several looting campaigns killed Dorestad, the residents died or moved away. And those big fires on the horizon? They weren't there. Archaeological research has not found any trace of it.

Fashion Through the Ages
20 Aug - 21 Aug
the Netherlands