A Personal Experience in Communicating History: Tales From the River Trent

Saturday 1 September dawns gloriously, and is unseasonably sunny. Our fingers are crossed that this is the Indian Summer we'd been praying for all August since we intend to do a lot of walking in the next three weeks. At 10 am we set off in the car from my parent's house in Nottinghamshire.

Strangely, we realise from talking to people, that the river is far more of a barrier now than it was a generation or two ago, and for hundreds of years before that. As we walk along the north-flowing part of the Trent, we notice matching pairs of villages either side of the river.

I'm in the back seat, hastily scribbling notes and doing last minute fact checking on my phone. Dad is driving and complaining about our lateness, in between shouting out the chords to 'The Skye Boat Song'. My boyfriend Ross is in the front seat, trying to play the chords Dad is calling out on a ukulele balanced on his knee. He's somewhat hampered by the fact that he's apparently the only person in Britain who doesn't know how the Skye Boat Song goes.

We're on our way to Biddulph Moor, an unremarkable village in the Staffordshire Moorlands, whose outskirts happen to contain Trent Head Well, the source of the River Trent. We're due to put on a music and storytelling show about the River Trent at a nearby country park at noon. By my calculations we've only just have enough time to get there. Dad's in a bad mood, and I already need a wee.

We really haven't rehearsed enough. We haven't, as you can tell, even finished researching and writing the show. And right at this second I can't quite remember WHY we are doing any of this.
It all started years earlier, when I was talking to a man from the Environment Agency about footpaths along the River Tame (a tributary of the Trent). He said something about there being footpaths all the way from the source of the river to the sea. I loved the sound of that-walking from the source to the sea! It sounded legendary and bardic. Like something a troubadour in a story would do.

And so a crazy idea was born. Spurred by my background in engaging the public with science, the idea eventually developed into an experimental public engagement project. Rivers are of interest to so many disciplines: geology, history, archaeology, ecology and in folklore. I started to read about rivers in general, and the River Trent in particular.

Did you know the Trent used to be the border of Mercia? That its route changed drastically at the end of the last ice age? That it's one of the few British rivers to flow north? One of only two to have a tidal bore? That the same tidal bore (the Trent Aegir, named for the Norse god of the sea) may be the origin of the story about King Cnut trying to turn the tide? Talking about a river seemed a great excuse to bring all sorts of stories together, and to encourage people to tell their own stories and think about their relationship to the landscape.

I read that the Trent had a role in history as a barrier. From 43 AD to 79 AD the Trent marked the northernmost reach of the Roman Empire. In 1745 it marked the southernmost reach of Bonnie Prince Charlie and his invading Scottish army. I read that it had a role as a carrier too-from invading Vikings to fleeing Pilgrim fathers, never mind imported tobacco and exported wool. Rivers keep things apart, and they also connect things. The Trent started to seem, to me, like a hitherto unappreciated major player in history!

So, a plan was hatched to walk from the source of the River Trent to the sea, doing storytelling sessions along the way. We called it Tales from the River, which sounded appropriately folkloric. When I told people about the plan, half of them thought it sounded awesome and wanted to join us, and half of them thought I was mad. Always the hallmark of a great idea, if you ask me.

This brings us to why we are setting off to the wilds of Staffordshire, with our walking boots, a ukulele and a laptop. I'd pictured myself looking mythic on a hillside, with a staff and flowing robes. I hadn't pictured myself in the backseat of a Skoda, bickering with my Dad about toilet stops. But such is the sad disjunction between imagination and everyday life.
I quickly realise this is pretty fitting for the whole project. There IS something magical about walking from one end of a river to the other. Both for us doing it, and for the people we met along the way.

But the mundane and the everyday are also part of the journey. In our 185 miles of walking we pass six power stations and 13 sewage treatment works. The beauty of following something like a river-instead of walking the Cotswold Way-is that it goes through all the crappy bits too. That's part of the story of Britain, part of the story of the past. Following a river keeps us real.

There's also a kind of integrity, or an investment, in walking on your own two feet from one end of the river to the other. Especially as we go further along in our journey. People hear that you've walked 100 miles to get there, they think, “Fair dos!” You may be an outsider to their village, but they think you've earned a cup of tea.

Maybe it was also that it changed our viewpoint on what was acceptable behaviour. At Cromwell lock, we go up and speak to the lock-keeper, explaining who we are, and asking him about the lock, his job, the river. If we'd had passed on a normal afternoon's walk, we might have wanted to go and ask him questions, but felt too shy. Having walked 90 miles to get there, we somehow feel we are allowed.

What else do we gain by doing this? A sense, somehow, of the physicality of the river. You can understand, intellectually, that a river can be a barrier in the landscape, but when you normally encounter rivers as you cross a bridge, in a car, that doesn't mean that much. When you are on THIS side of the river, and your next gig is on THAT side of the river, and you're on foot and there is ten miles between bridges... well that gives you a real appreciation of a river as a barrier.

Strangely, we realise from talking to people, that the river is far more of a barrier now than it was a generation or two ago, and for hundreds of years before that. As we walk along the north-flowing part of the Trent, we notice matching pairs of villages either side of the river. West Stockwith and East Stockwith, Owston Ferry and East Ferry, West Butterwick and East Butterwick. There would be a road approaching each settlement, but now it goes no further.

At Marton, just South of Gainsborough, that road is a Roman road (now the route of the A1500) and the village on the other side is called Littleborough. We break our journey to visit the community archaeological dig in Marton and hear about what they'd been finding. It would have been a substantial settlement at the time, a stopping point on the road from Lincoln to Doncaster, now it's a tiny village with one pub and a bus that goes every two hours.
We do a show in the village hall in the evening and mention the dig. I ask how it feels to live somewhere that's been inhabited for almost two thousand years. One bluff country woman, with a capacious bosom and a no-nonsense haircut surprised me with her answer.

She said, “Where are they all? That's what I want to know. There's been people living here all that time-must be thousands and thousands of folk. There's a couple of hundred of them in the church yard. Where are the rest?”

It is good to be reminded that the best questions can come from anywhere. Even from old women who look a bit like your Auntie Angela, in a village hall in Lincolnshire.

Until a few decades ago there would have been a ferry connecting each of these matching pairs of villages, meaning that these dead-end roads went somewhere. Also, of course, meaning that the two settlements were in daily contact. Now, these settlements, a stone's throw from each other, can be a 20 mile round trip away by road.

The ferries declined because they weren't economically viable any more. As did the freight traffic on the river, when road haulage became cheaper. In all the miles we cover, we walk past disused warehouses, crumbling, forgotten old turning posts. We get a real sense of the old life of the river that'll soon be forgotten. Old guys in pubs would hear from the barmaid what we were doing, and come over to tell us a story about their Granddad the boatman. We become a magnet for people's stories. And we pass those stories on in other places along the river.

I think something of the magic we feel about it all-even through the blisters, and the rain and the sewage works-seem to speak to other people. One old guy in a pub near Burton-on-Trent shyly comes over to us with a piece of paper he'd written his email address on. “Email me, if you get to the end”, he said, with a far away look in his eye, “I'd like to know if you make it.”
We do get to the end, at Julian's Bower, a medieval turf-cut maze in the village of Alkborough. We stand there, in our wet socks, in the drizzle, looking at the end of the Trent. We can’t quite believe we've really done it. We've been following this river for three weeks, by now it feels like a friend. We look down to where it joins the Ouse, to form the Humber. My boyfriend says, “If we set off now, up the Ouse, we could be in York in a few days.” 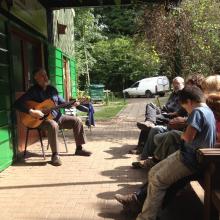 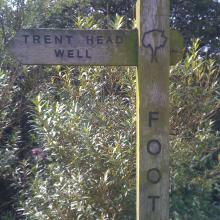 Fig 2. It must be somewhere round here… 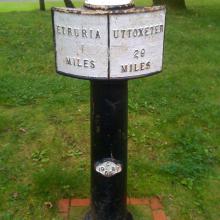 Fig 3. Mileposts give us a reassuring… 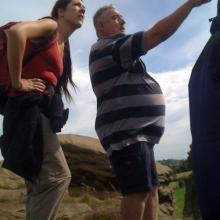 Fig 4. At Wickenstones Farm, near… 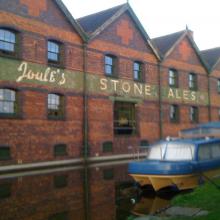 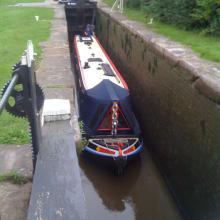 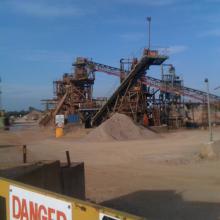 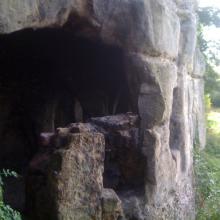 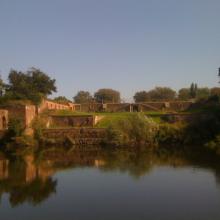 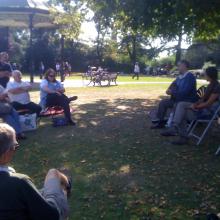 Fig 10. Us performing in the ruins of… 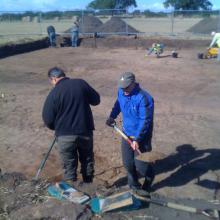 Fig 11. Volunteers at the community dig… 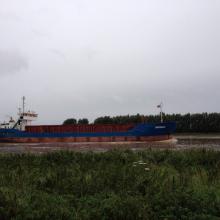 Fig 12. Cargo still travels up and down…

Book Review: "Experiments Past" Edited by Jodi Reeves Flores & Roeland P. Paardekooper
Obituary: Peter Kelterborn (4 July 1928 – 9 March 2017)
From Mead to Snakebite - An Ethnography of Modern British University Sports Team Drinking Culture and its Parallels with the Drinking Rituals of the Viking World
Early Efforts in Experimental Archaeology: Examples from Evans, Pitt-Rivers, and Abbott
The Best Way of Preserving Something is to Educate about it - Educational Centres in South Africa