The Viking Village Storholmen is an archaeological open-air museum, beautifully situated near Lake Erken, ten kilometres north of the coastal town of Norrtälje, Roslagen, Sweden. The Viking Village is situated in an exciting and historically important region that shows traces of substantial connections throughout the Baltic Sea and further east. Grave fields and runes stones surround the village, with a large burial field from the late Iron Age, with 166 burial mounds, right next to it. The burial ground is set within a beautiful nature reserve with giant oaks, several hundreds of years old. Last year, 25 May 2014, Mats Geschwind, one of the founders of Storholmen Viking village passed away. Mats was an inspirer, he strongly believed in living history and was the driving force behind the founding of the Viking village in 1995.

In the winter of 2000, there were Christmas banquets in Foteviken, Here I met Mats and  his wife Britta, who were there to play the Viking King and Queen, while I was there as a Viking musician; we had a perfect show together. Since that winter, I visit Storholmen every year in the summer opening to work with them as a musician, textile historian and craftswoman.

Bjorn Jacobsen from Foteviken, Sweden met Mats and Britta in the beginning of the 90s. Bjorn tells me they where both pioneers in starting an open air museum, talked about this, exchanged ideas and stayed in contact over the years.

The Viking Village is run by a non-profit foundation and has a non-profit support association. Mats Geschwind was chairman of the board, but he was much more than that. He was like an inspiring magnet, drawing other people into the village. He was a craftsman of wood as well as textile, a carpenter, set designer, administrator, leader and pedagogue; he often had strong but fair opinions. Maybe his biggest gift was his bravery and capability to really see other people.

The purpose of the Viking Village is to reanimate history, and in a tangible way, give people of different backgrounds an exciting insight into the complexity of Viking Society, to broaden their view of the Viking Age and to offer several images so that people can question these.

The heart of the pedagogic idea is, like in other archaeological open air museums, to give visitors the opportunity to really participate; to try ancient handicraft and other activities first-hand.

School children get to experience the Viking age first hand, thorough handicraft, sagas, and playing games. At the same time, the Viking Age is used as a mirror to our modern society; a sounding board for discussing questions of gender, ethnicity and class. In the burial ground, the children get to talk about death and the existential questions that bind all humans together all over the world. For Mats, working against xenophobia was very important.

In the summer, the museum is opened for drop-in visitors, while groups can book visits all year. The gates to the open-air museum are however also open when the museum has not arranged activities; then, Storholmen is used as a recreational area for the public, free of charge, all year round. People use the grounds for fishing, swimming and walking their dogs, while they can also use its fireplace.

Storholmen was founded in 1995 and has grown to become an educational, intercultural Viking village, where every year lots of volunteers from many parts of the world work and live together for several weeks during the summer.  Storholmen have both voluntary and paid staff. Like all open Air museums, Storholmen is based on the knowledge we have of the Viking Age, but Storholmen has its own personal touch and ideologies that Mats thought of as very important.

Besides providing lots of knowledge about the Viking Age, he wanted to create a good atmosphere where people would feel good and have respect for each other. If people who help in the village feel good, the visitors will notice. This is exactly what is happening every year I visit Storholmen as a Viking musician; visitors come up to me and tell, ”we can see you have so much fun together and are doing a great job mixing education with entertainment.” In this way Mats objectives were really working. In the summer, people from many parts of the world gather in the Viking village to live, eat, and work together. Most people you will meet there come from the support association of the museum; others are craftsmen and women that have found their way to Storholmen.

Mats Geschwind was also a theatre producer, a skill he used in running the Viking village.  During the summer there are “Tings”, “council meetings”, and optional ceremonies, where “thralls” can choose to become “free Vikings”, after completing a test in knowledge and handicrafts. These happenings, in which all the people participate, make Storholmen a special place. As a person who came from theatre and the film sector, Mats was able to play the king of the Viking village, guarded by his personal hirds, with good humour. In this role, he and his wife Britta Zetterstrom Geschwind, portrayed the perfect scene for the Viking village.

Storholmen also co-operates with a peace organisation called Internationella Arbetslag (IAL). It is the Swedish branch of the international peace organisation, Service Civil International (SCI). IAL was founded in 1943 and has since then, worked for an ecological and multicultural society characterized by solidarity, non-violence and understanding between people. IAL is a non-profit voluntary organisation independent of religion and party-politics.

Mats and Britta, as King and Queen of Storholmen, had the capability to really see the people who participate in Storholmen; see their personalities and there capabilities. This way of really being interested in the people who are helping, is a very personal touch in Storholmen and brings out the best in people. Everybody helps out in the village and all are equal. Mats liked to surprise people and he had the ability to always make people feel special because of their participation, with just the right words or a personal gift.

This year during the summer opening, there was a beautiful ceremony held for Mats, king Bearclaw.

The ceremony was led by Harald Juul Kristensen. In a burial mound, a chest with personal gifts from friends was buried. Now there is a place in the museum to honour and remember Mats.

The summer opening in 2014 was special for all the people who participated in Storholmen; missing the great chief Bearclaw, but still trying to making the best of it in honour of Mats legacy. His son Emil Geschwind became the new chief Bearclaw; the son taking over his father’s job, the chief of Storholmen, and did a great job!

In this way I am certain Storholmen will continue to be this special Viking village where education, entertainment and a good atmosphere will come together.

I feel it as an honour to have met and worked together with Mats and Britta in Storholmen and other places as a Viking, king Bearclaw’s musician and friend.

From the author:
On the side part of the MIDVINTER blotet 28 December 2013 (Mats poem, he read for everyone that had gathered) 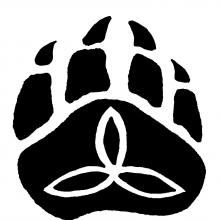 Documentation Strategies at Butser Ancient Farm
What Does Your Visitor Experience? Making the Most of Live Interpretation in a Unique Setting
Event Review: Daily Life and Feasting in the Neolithic: Celebrating the Tenth Anniversary of Experience in Experimental Archaeology at the Steinzeitdorf Albersdorf
Gene Fornby - the Ancient Village of Gene
How to Make a Medieval Town Come Alive – the Use of Volunteers in Living History