The relative rarity of textiles in the archaeological record makes this a fascinating area of research not least because the technology is well understood but also because, in many cases, little changed over time. Traditional methods of felting, spinning, weaving and sewing are commonplace activities undertaken by many amateurs and professionals worldwide providing a vast range of ethnographic evidence in all of these disciplines (Barber 1991; Hodges 1971; Renfrew and Bahn 2008; Wild 1988).

My aim was to test the viability and ease of using two different thread types for sewing felt on felt; human hair and horse hair.

My work has been inspired by some of the most remarkable textile finds - those in the Pazyryk kurgans (burial mounds) - specifically the felt shabraks (horse blankets). The detailed, intricate designs of these items are achieved by appliquéing felt on felt (sometimes leather is used) in a manner that adds both decoration and strength (See Figure 1) and is still used among the steppe-land nomads (Barber 1991, 220).

In the numerous descriptions and analyses (Barber 1991, 199-222; Renfrew and Bahn 2008, 66; Rubinson 1990; Azarpay 1959; Balalinka et al 2006; Polos’mak 1996) of these practical and ornamental items, there is no mention of what fibre (thread) has been used to sew the cut outs onto the base fabric other than Parker Pearson’s ambiguous reference stating that “locks of human hair were found sewn into pieces of leather and felt” (Parker Pearson 2003, 63). Barber makes reference to human hair as well as horse hair being used in textiles but also makes no mention of whether these were an integral part of fabric or utilised as a sewing thread (Barber 1991, 30).

Of course, there are a number of possibilities regarding the thread in this context; finely spun wool, although this seems unlikely given that the most abundant textiles found in the Pazyryk contexts are unspun felt; silk is a possibility as there are some woven silk artefacts in the kurgans which have been attributed to indirect trade with China; plant based fibres such as flax or hemp are also candidates but there is no mention of these. With this gap of knowledge in mind, the idea for this project developed.

My aim was to test the viability and ease of using two different thread types for sewing felt on felt; human hair and horse hair.

I realised very soon that, the felt would have to mimic that of the shabraks as closely as possible. This meant making the fibre felt 1 rather than buying it premade. To this end, I sourced two types of sheep wool (Lincoln and Blue Faced Leicester) already carded and combed, some of it dyed red, yellow and blue with natural pigments, namely madder, weld and woad respectively (See Figure 2).

In terms of human hair, there is no evidence to suggest that the Pazyryk’s were ungroomed or didn’t have clean hair and so the sewing could be carried out with my own hair (which isn’t coloured or treated with any chemicals), collected from a hairbrush over a number of weeks (See Figure 3). The horse hair (See Figure 4) was sourced by a kind friend and is believed to be the result of standard grooming.

After much consideration, I decided that a metal needle could be used as there is no reason to believe that the needle workers responsible for the workmanship of the shabraks did not have access to bronzesmiths and consequently bronze needles (Hodges 1971, 233).

The first step was to make the felt. The process is to separate and spread the wool in layers, alternating the layers at right angles to each other to add strength to the finished fabric (See Figure 5, 6 and 7).

The wool is then made wet and both pressure and friction are applied. This causes the fibres to bind together and form a stable fabric. Once the fibre has bonded, excess water is removed and the felt bashed about to further strengthen the bonds. Barber describes the process as it is currently practised in India and Asia, on larger scale fabric, as “…rolled, re-rolled, kneaded, beaten, stamped on, dragged about and otherwise subjected to as much friction and pressure as possible…” (Barber 1991, 216).

The second step was to cut out some shapes ready to sew onto background felt (See Figure 9).

The final steps were the sewing – firstly with human hair and then with horse hair.

In simplistic terms, it is both feasible and plausible to appliqué felt on felt using both human hair and horse hair. However, as will be explained, it requires a certain degree of skill and patience to overcome a number of challenges involved.

While making the felt was not the focus, it was necessary in order to provide some authenticity. The one thing we know with certainty is that fibre felt was abundant in the Pazyryk kurgans and was the material often used for making the shabraks. While I made the felt without recourse to hot water or soap (both of which are known to aid the process) I did have to use tap water from my bathroom, as well as make the felt in small pieces in a metal tray rather than in large sheets on the ground. The quality of the finished felt is not of particularly high standard but it was sufficient.

The first challenge was encountered immediately. Without natural light it was almost impossible see the individual strands of hair even while wearing my glasses. Realising that it could prove difficult to even thread the hair through the eye of the needle, I positioned myself near a window so that I had the benefit of natural light (See Figure 10). The next hurdle was anchoring the hair into the felt, not only was it difficult to see but it was almost impossible to feel the strand against the felt to enable me to hold an end in place so that it could be over sewn and anchored (tying a knot had proved impossible!). This was compounded by the needle continually ‘unthreading’ because I often ‘lost’ the hair and so was unable to hold it securely. However, perseverance paid off and after about half an hour I had completed a small row of stitches and secured the end of the hair to prevent the work unravelling. After a small rethink, I decided to try combining first two and then four strands of hair together to obtain a more visible thread. The challenges grew exponentially in that I now had multiple strands of hair that were individually presenting the same challenges.  Refusing to be disheartened, I reverted to the single strand and after a bit of practice I managed to make good progress and got the result I was hoping for (See Figure 11 and 12).

This proved easier from the start. The individual hairs were easier to see and because they are of a coarser texture than human hair, they were easier to feel. These two factors made it easier to both thread the needle and anchor the thread into the felt (see Figure 13). However, the ‘springy’ texture and also the shorter length of the strands made it challenging to keep the stitches in place until the thread was fastened off into the back of the felt again. Because it was easier to securely anchor the hair, it made it possible to use a running stitch as well as over sewing to appliqué the cut outs onto the background felt (See Figure 14).

Some expertise and good eyesight are required to produce results, but there is no reason why either of these threads could not be used for sewing felt on felt. Both of these fibres are usable as threads and it is certainly possible that either may have been used in a society that was not producing spun thread. Given the apparent high status of the shabraks, I would suggest that if either of these fibres had been used, it would be human hair.

BARBER, E.J.W., Prehistoric Textiles: The Development of Cloth in the Neolithic and Bronze Ages with Special Reference to the Aegean (Princeton University Press, 1991).

CALLAHAN, ERRETT, ‘What is Experimental Archaeology’, in Primitive Technology: A Book of Earth Skills, ed. by David Westcott (Gibbs Smith, 1999).

HODDER, Ian, The Present Past: An Introduction to Anthropology for Archaeologists, (Pen and Sword Archaeology, 2012).

PARKER PEARSON, Mike, The Archaeology of Death and Burial, (The History Press, 2003). 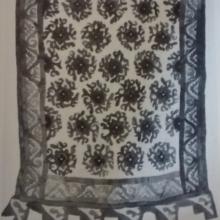 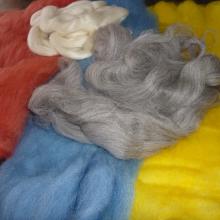 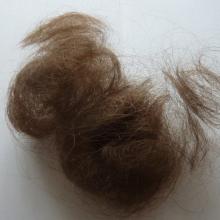 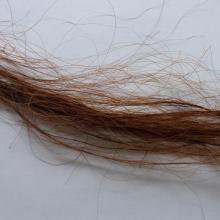 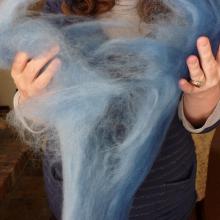 Fig 5. Separating a batt ready for… 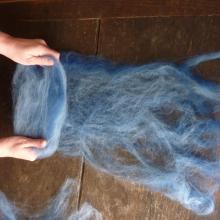 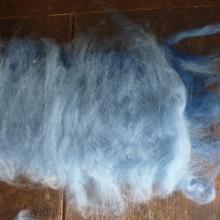 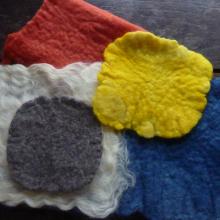 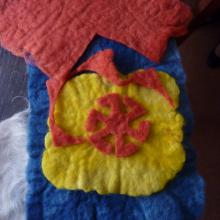 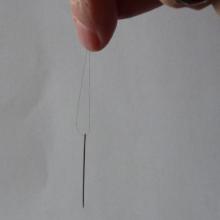 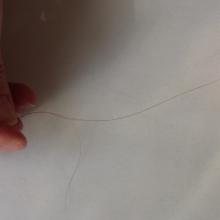 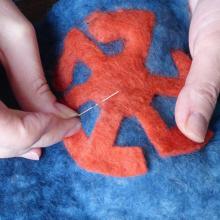 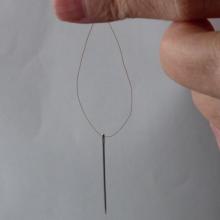 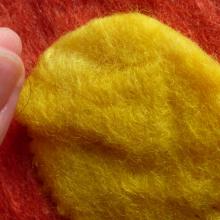 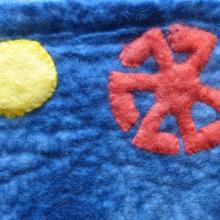 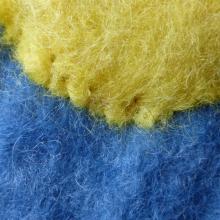 Fig 16. Close up view of stitches made… 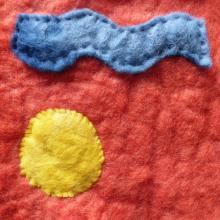 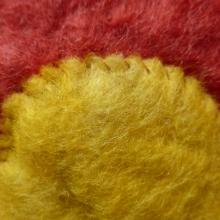 Fig 18. Close up view of stitches made…

Recreating the Fonseca Hairstyle
Book Review: With One Needle: How to Nålbind by Mervi Pasanen
An Experimental Comparison of Impressions Made from Replicated Neolithic Linen and Bronze Age Woolen Textiles on Pottery
Some Uses of Experiment for Understanding Early Knitting and Erasmus' Bonnet
Different Types of Needles for Specific Uses? Experimental Reproductions of some Finds from Aradetis Orgora, Georgia