Event Review: Terra Ibèrica Festival in Calafell: a Backward Glance Through the Years (2010-2014)

Terra Ibèrica [Iberian Land], the biggest event held at La Ciutadella Ibèrica of Calafell (Tarragona, Spain), is one of the highlights in the calendar of activities of this Iron Age reconstructed archaeological site. Now a multi-day festival, Terra Ibèrica originated from Nits Ibèriques [Iberian Nights], a re-enactment show performed every Friday and Saturday of August during the early 2000s. In 2010, it changed to the multi-day festival format with its main objective to present Iberian culture in an informative way to a wide range of public.
Since the first edition in 2010, the festival has grown thanks to the people and institutions involved in its preparation. Local associations, such as the theatre group La K-Mama, the fishermen guild, the Friends of Calafell Heritage Association, the re-enactment group Ibercalafell, and the municipality of Calafell; and individual volunteers, who love and respect local heritage, have all made important contributions to make Terra Ibèrica.

Iberians received strong cultural influences, mainly from colonies established by Mediterranean peoples such as Phoenicians, Greeks or Carthaginians, but also influences from other peoples such as Celts, Etruscans and Romans. In this sense, we have incorporated into our activities, workshops and thematic visits, in our storytelling, in the preparation and development of activities, these elements that place La Ciutadella and the Iberian world within a European cultural context.

In 2010, the programme offered basic, dramatized visits with two Iberian characters played by staff from La Ciutadella, morning workshops for children, an Iberian food workshop, and the re-enactment show of an Iberian military camp. The festival received 512 visitors in four days.

The following year, the festival added an additional day, with the programme featuring talks by experts and the gastronomic activity, Cossetans a Taula!, in which local restaurants prepared dishes inspired by food products documented in Iberian times. This edition revolved around the evolution of the site from a village to a fortified citadel during the fifth tothird centuries BCE. The main activities of the programme focused on this theme.

The 2012 edition was a bit more ambitious in the sense that there was an extension of the festival duration, and therefore more activities for the public. This festival had as a conceptual basis the historical moment when Romans arrived on the Iberian Peninsula (218 BCE) in the context of the Second Punic War (218-201 BCE). Most of the programme activities incorporated this historic fact as a common thread. An exhibition about Iberians, thematic visits, activities for families and children, conferences about re-enactment, battles, epigraphy and food in the ancient times plus the involvement of local restaurants in the Cossetans a Taula! were included in the programme.

Furthermore, this edition was the first organised in partnership with the EU Culture Programme project, OpenArch. Being that Terra Ibèrica as an event attracts more public to La Ciutadella, and that the aim is to present Iberian culture by promoting both the tangible and intangible past, we thought this activity would fit in OpenArch’s work package 3 (The Dialogue with the Visitor) as we use different resources in order for our visitors to have a good experience. The historical re-enactment show is perhaps the highlight of the festival. In 2012, it was possible thanks to the support of OpenArch, the local group Ibercalafell, and the association for the recreation of the Punic Wars Bellvm Annibalicvm, to invite reenactors from two Spanish groups, Iboshim and Athenea Prómakhos whose participation in the re-enactment activity resulted in brilliant added value to the festival closing act. Besides the re-enactment groups, Terra Ibèrica was a good chance for other local cultural agents to get involved in Calafell’s historical heritage. In 2012, the local theatre La K-Mama did a lot of volunteer work to carry out a living history show named “Romans tread on Iberian Land” collaborating with the festival by sending actors and preparing the script. For two nights, La Ciutadella became an open-air stage where visitors could see the representation of the moment when Iberians were about to be attacked by Roman warriors. In the festival’s last week, we had a staff member from Amgueddfa Cymru, St Fagans National History Museum (Wales), who actively participated in the preparation work of the closing act as a result of a staff exchange in the framework of OpenArch.

The 30th anniversary of the first excavations at La Ciutadella was the core theme of 2013 edition. As many activities revolved around the excavations, archaeology was included in the preparation of programme activities for the festival. It kicked off with an exhibition of the evolution of La Ciutadella through the years, from the first excavations by University of Barcelona archaeologists Joan Santacana and Joan Sanmartí in 1983 to the present. This multimedia exhibit included the evolution of the excavations, the reconstruction in the early 1990s, and consideration of the present and future challenges at La Ciutadella. EXARC membership and participation in cooperative European projects, such as OpenArch, are mentioned as one of the milestones in the last years’ inputs to continue progress with participating in European networks.

The programme had a diverse range of activities for the public, introducing novelties such as the Iberian Card for children and the Iberotardes, the kitchen workshop presented by an archaeologist and a local chef who demonstrated a tasting activity using documented food from Iberian times. The closing act was “The Whisper of Stones”, a show that combined museum theatre and historical re-enactment scenes about the evolution of La Ciutadella since its excavations. Evocati Apri Scipioni, a Roman re-enactment association, and local theatre company La Porta de Fusta, both participated in this performance. OpenArch support contributed to make it possible. The number of visitors attending this edition increased to 1500 over previous editions.

In 2014, crafts and experimental archaeology played a prominent role in the programme, with OpenArch again being one of the keys. This edition of the festival revolved around the use of fire as a key element in the transformation of different natural materials. The kick off consisted of a public presentation of experimental actions performed by archaeologist José Miguel Gallego featuring Iberian ironworking chai, an experiment which took place at La Ciutadella in Spring 2014, and the short film Iberians: The Secret of Iron, a dissemination film about the ironworking process. Both activities were possible thanks to the support of OpenArch. Implementation methodologies for presenting activities to the public, learned from OpenArch partners, were more visible this year, especially with regards to the craft workshops. Museum staff and Ibercalafell members organised the Nights of Fire, a living history show for this edition. It consisted of a tour around the site where visitors could see different handicraft activities where the use of fire is needed in order to produce objects or food.

In conclusion, OpenArch has been an important contributor to the Terra Ibèrica festival, helping to improve the visitor’s experience through a number of factors. For example, OpenArch engaged La Ciutadella educators with other project partners via staff exchanges and participation in workshops and site visits which provide extra motivation.  Project objectives, have been useful in gaining knowledge and helping to improve how the story of the site is presented to our public. As a result of learning how other colleagues across Europe work, we are more aware of adding new elements to activities, as a way of improving quality on the one hand, and on the other, a way of showing European added value to our museum.

Another way of presenting European added value is by setting the Iberians in their historic context. Iberians received strong cultural influences, mainly from colonies established by Mediterranean peoples such as Phoenicians, Greeks or Carthaginians, but also influences from other peoples such as Celts, Etruscans and Romans. In this sense, we have incorporated into our activities, workshops and thematic visits, in our storytelling, in the preparation and development of activities, these elements that place La Ciutadella and the Iberian world within a European cultural context.

So a new edition is coming up in 2015, from 24 July to 1 August, and we expect to keep incorporating new things in order for Terra Ibèrica to one day become a reference festival in the framework of historical re-enactment acts in the territory. 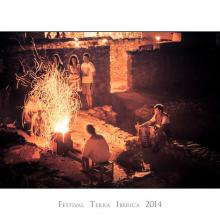 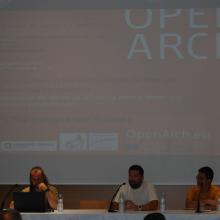 Fig 2. Presentation of the iron… 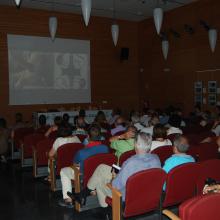 Fig 3. Presentation of "The Secret… 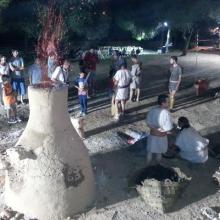 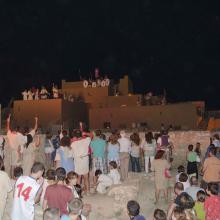 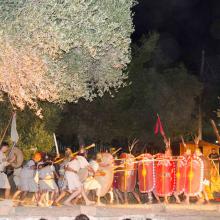 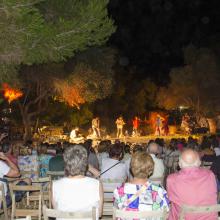 Fig 7. Theatre play in the living…