The Construction of a Skin-on-Frame Canoe at Kierikki Stone Age Centre, Finland, as a Medium for Group Training in Ancient Skills and Experiential Learning

In July 2018 a group of students from the UK participating in the Placements in Environmental, Archaeological and Traditional Skills (PEATS) Erasmus + Work Placement, attended the Kierikki Stone Age Centre, Pahkalantie, Finland. Part of that training included experimental / experiential projects that were coordinated by Dr. Peter Groom of the Mesolithic Resource Group. Next to the authors also involved in the construction of a skin-on-frame canoe were: Alice Angeline, Jonathan Cusdin, Emily Elsmore, Evon Kirby, India McDermott, Katie Rose Prideaux, Lottie Rogers, Jasmine Savill.

In order to give the participants the experience of working with a range of lashing materials, willow bast, birch bark, and elk rawhide were used.

In order to involve as many students as possible, it was decided that a suitable week-long project would be to build a canoe from materials sourced at, or local to, Kierrikki Stone Age Centre. Several log boats are already present in the Stone Age Village at Kierrikki, as was a skin-on-frame canoe made in 2016. However, the split wood frame of that canoe had cracked and twisted and the tar-treated skin had hardened and become brittle, to the extent that it had torn in several places, rendering it unseaworthy. Given the condition of the canoe, we chose to dismantle it and construct a new basketry-frame canoe, reusing the hides where possible. The completed canoe would then be displayed in the Stone Age Village.

Where possible (given the limitations of inexperienced participants), we used technologies and materials that were sourced locally.  As such, for most of the project we used unmodified stone tools, such as pieces of quartz, flint or slate, found on the ground or along the shoreline. All materials were procured on site, many of them in the work area.

However, given the limited skills-sets of many of the participants, on occasion a specific tool was permitted, for example, a pruning saw. As many of the participants were unfamiliar with primitive skills and experimental archaeological practices in general, this week-long project was treated primarily as a training exercise. Therefore, timings of individual activities were not monitored as this would have been unfair on inexperienced individuals with fewer skills and might have had a negative effect on confidence. Instead, the guiding principle to the project was, it takes as long as it takes.

The plant materials used throughout the construction reflect those of the area, alder (Alnus sp.) birch (Betula sp.) and willow (Salix sp.). The additional skin for the canoe was from an elk (Alces alces) and elk rawhide was used to make the lashings.

Experimental construction
The outline plan was to disassemble the two-year-old skin-on-frame canoe and if possible, reuse the hides. This proved difficult at times due to the toughness of the tar-covered skins. However, once the rawhide lacing had been removed from the framework, the hides began to show some flexibility. Nevertheless, they were still too stiff to be able to be removed from the frame. At this point, the canoe was taken to the river and weighted with rocks in 60cm of water so that it was entirely submerged. After two hours of immersion, the hides had started to become supple. However the decision was taken to leave the canoe soaking until the next day. After 24 hours, the hides were flexible enough to work.

While the 2016 canoe was soaking, materials for the new canoe were being procured. Rather than using split wood to make a single frame, as in the 2016 canoe, the new canoe would consist of two frames; an outer-woven basketry frame, which would hold the shape of the canoe, and an inner frame, which would take the weight of the canoeist. All the materials were harvested by hand from the Kierriki site. The most suitable materials for the frames were willow, alder and birch. However, willow was in short supply, therefore, alder and birch provided the bulk of the material. The outer frame required ten willow rods for the ribs 2m long and 2cm width, and 120 weavers 3m long and 1cm width. The inner frame required four alder rods 4m long and 3cm width, and ten rods for the ribs 2m long and 2cm width. It was key that the rods and weavers were consistent in form, so that the outer frame was as tight and smooth as possible, and less likely to pierce the skin. The bark was left on most of the materials, but removed from the inner frame for aesthetic purposes.

Construction began with the outer frame, which was loosely based on the size of the original hides. Initially, the butts of the ten willow rods were pushed at regular intervals into the ground to create the desired canoe shape, with a bow and stern. These rods were then bent to the opposite rod and tied off to create a series of ribs (hoops) (See Figure 1). Once the ribs were in place, the first sets of weavers were used in a pairing weave between the ribs, and the canoe began to take shape (See Figure 2). This upside down method of production is very effective, in that the ground acts as a clamp, holding the construct in place for days if required.

A complete basketry frame was woven all around the hull, from the gunwale (top) to the draft (base). Though this increased the weight of the canoe frame, the weight and amount of surface area of the skins necessitated a strong basketry framework. Throughout the weaving process, particular attention was taken to ensure that the bottom of the canoe was flat, as a keel was not desired (See Figure 3).

In order to give the participants the experience of working with a range of lashing materials, willow bast, birch bark, and elk rawhide were used. The bast was taken from some of the willow weavers and twisted into two-ply cord, birch bark was cut into 3cm wide strips and rawhide was cut into 1-3cm strips. During construction, temperatures reached 30°C which meant that the weavers had to be regularly soaked to maintain flexibility. This hot weather also made the manufacture of the willow cord difficult as the fresh bast dried almost immediately, again necessitating regular soakings to maintain suppleness. To increase the suppleness of the birch bark lashings, the bark was heated over a wood fire. This caused them to flex and curl, which meant that they better retained their shape during binding. When the weaving was complete, the canoe was carefully lifted from the ground and turned upright, the port (left) and starboard (right) sides of the canoe were tied together with rawhide strips to prevent the canoe from falling open. Thwarts (bracing rods) were then attached at four points (See Figure 4) to prevent the canoe collapsing in on itself.

The construction of the outer frame (weaving, lashing and adding the thwarts) took just under three days to complete, with two people engaged in this activity (James Findlay and Patrick Sweeney) while other members of the group helped in construction or with a range of associated tasks. Procurement of willow took place every day, with daily soakings of willow and birch bark. Making of lashings was ongoing, clearly illustrating how important the manufacture of cordage/bindings was in a world without nails and screws. When the entire basketry framework was complete it was carried to the lake margin, sunk in 60cm of water then weighted with stones along the inside edge of the bottom. The theory being that three days of soaking in warm shallow water would rehydrate the now drying frame and create a flatter profile along the bottom of the canoe.

While the basketry framework was soaking, the hides were removed from the original canoe and worked in the warm shallow water of the lake. This involved scrubbing with stones and sand, and working by hand in order to regain the flexibility. A combination of regular stretching and re-wetting of the old hides meant that after two days they were ready for fitting on the new canoe.

After three days, the stones were removed from the base of the new canoe and it was lifted onto the bank where it was inverted, and the old hides hauled over the framework (See Figure 5). Rawhide lashings were used to lace the hides to the framework along the gunwales. However, due to the different shapes of the original canoe and the new canoe, sections of the hides had to be cut away at the bow gunwales, whilst at the stern an entire new hide was needed. Throughout the time that the canoe frame was being constructed, an elk skin had been prepared by one of the participants. This new elk rawhide was cut to shape and attached to the gunwales of the outer frame using rawhide lacing; it was then sewn to the old hides using a double stitching method (See Figure 6). Where there were holes in the old hides, small pieces of rawhide were stitched on as patches. Once the outer frame and hides were complete, the inner frame was made inside the canoe. Using four stripped alder rods as stringers and ten short stripped alder rods as ribs, the inner frame was lashed to the outer frame (See Figure 7). This frame braced against the outer frame and shifted the weight of the canoeist onto these stringers and ribs so that the canoeist was not sitting directly on the outer basketry frame of the canoe. Similarly, in order to prevent the canoeist’s feet pushing on the outer frame, a flexible footboard was added (by Jasmine Savill). Made from short sections of stripped willow rods lashed together with rawhide, this was pliable and could be placed to accommodate the canoeist’s preferred body position.

The final task was to check the inner and outer frames and apply a bitumen paint to the outside hull to seal and waterproof the hides of the canoe (See Figure 8). When finished, the canoe sat high in the water and provided plenty of freeboard to protect the paddler (See Figure 9). The canoe was trialled by India McDermott (a seasoned canoeist) and as Figure 10 illustrates, it was quick through the water, very steady, manoeuvrable and handled well.

Fundamentally, it demonstrated the effective use of experiential archaeology as a training medium for primitive/ancient skills and as a provider of a basic level of ecological/environmental knowledge. In addition, by engaging in this experiential learning project, the participants were able to gain a little of our ancestors’ knowledge. An audit of skills illustrates the range used in the construction of this canoe:

All these skills were used by group members to achieve the completion of the task. Even those who lacked skills were able to contribute Something. For example, if someone could only produce just one metre of willow cord for lashing, the whole group could still progress in their task, emphasising the productivity and community of ‘group work’. Then there is the fact that by being involved in these activities, individuals are learning and are thus active in passing on and preserving these ancient skills. Finally, by conducting these activities in a public space such as Kierikki, an individual’s confidence is increased by discovering an inner creativity and being able to communicate their creativity to members of the public. 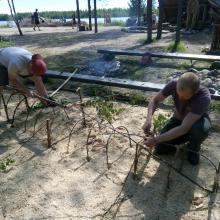 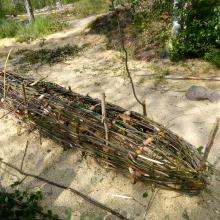 Fig 3. The outer basketry frame prior… 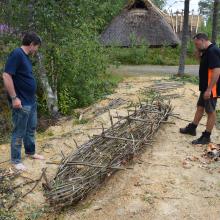 Fig 4. The outer basketry frame, the… 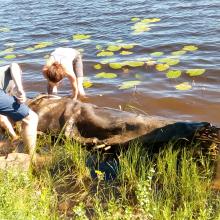 Fig 5. Working the old hides onto the… 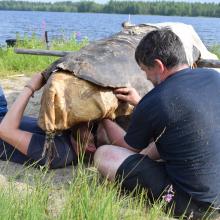 Fig 6. The hides at the stern being… 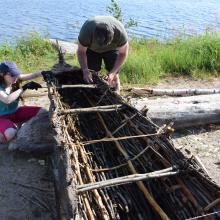 Fig 7. Patching up the hides and lacing… 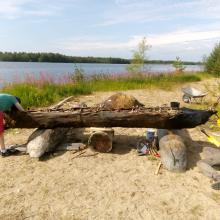 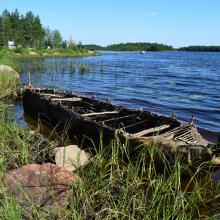 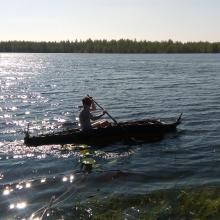 From Gastonia to Gotha: My Thoughts and Impressions on doing Museum Work
The Construction of a Skin-on-Frame Coracle at Kierikki Stone Age Centre