The purpose of this experiment was to examine the shepherd sling to form an understanding as to why it would appear to be the most dominant missile weapon of Iron Age Britain (Harding, 2012, p.194). The experiment consisted of making and using the sling, testing its range and accuracy to reveal its strengths and limitations. This experiment was also intended to introduce a different interpretation from previous experiments which have been conducted by both, professional slingers and novices in the practical use of weaponry; each brought solid conclusions which suggested that the sling was hard to master and only used by professionals. What we must consider is that people of the Iron Age would have been very practically minded with transferable skills, potentially; making the use of the sling much easier for the common person of this period. As I am a qualified weapons expert in Kobujutsu and Ninjutsu, I intended to put this theory to the test and see if my skills were transferable. Within these disciplines, chained or roped weaponry are used as climbing aids or to trap, ensnare and even throw at opponents (Hayes, 1981, pp.69-76), additionally; bladed implements of all types are also taught to be thrown (Hatsumi, 1981, pp.165-77). My aim was to combine the swinging technique of a chain, followed by a throwing technique to understand the dynamics of how to use a sling; challenging the theory that the sling was difficult to master and filling the void from previous perspectives.
Before construction it was important to look at the history of the sling, the archaeological record and how it may be used in modern-day society, gauging a better understanding of how it was used and for what reason. This knowledge gave me enough information to replicate and use the sling to undertake controlled experiments, giving a better insight into the sling’s capabilities and the people of Iron Age Britain.

I certainly feel that the sling was a very effective and practical weapon, both quick to make and relatively easy to use, and to my surprise; very accurate.

Within Pre-historic Britain a revolutionary change occurred with the discovery of iron, generally known as the Iron Age (800 BC-43 AD) (Pickering, 2016, p.243), although no clear archaeological evidence defines this transition; as many Iron Age attributes date back to the Late Bronze Age (Hunter and Ralston, 1999, p.113). This period marked the time of the sling, or at least what evidence we have of this pre-historic weapon. Slings were commonly associated with hillfort structures, identified by hordes of sling-stones discovered on several locations. It has been suggested that as a long-range weapon, the sling was responsible for influencing multivallate hillfort architecture, although this can also be contested with hordes of sling-stones discovered within univallate structures; indicating development through the need of defences over time, rather than the introduction of slings (Greep, 1987, pp.183–200). Potentially, increased aggression may have also been a result of financial status, influenced by the introduction of coins (Cunliffe, 1993, p.210). Maiden Castle in Dorset certainly resembled a site developed under aggression, with its mass defence structures and the use of sling-stones, 22,000 so far have been recorded; highlighting a strong use of the sling in a combat situation (Pickering, 2016, pp.247-249). Danebury hillfort is another good comparison, around the defences and inner gates, hordes of sling-stones were found in ready piles, plus additional shot was found scattered across the perimeter; mainly focused around the entrances (Hampshire County Council, 2017). Dorset and Wiltshire also highlighted evidence pre-dating this period with the discovery of clay sling-shot (Pickering, 2016, p.249), another discovery in St Albans revealed later lead sling-shot used by the Romans, either way, this highlights the sling as a common weapon of the Age; whether used for hunting or military practice (Greep, 1987, pp.193-197).

Evidence certainly shows that some shot was purposefully made, whereas others indicate natural smooth stone; like the shot at Maiden Castle which were collected from the local area at Chesil Beach (Pickering, 2016, p.248). Evidence also suggests that clay shot could have been very important in warfare, as clay shot was potentially heated up and then slung at a wooden structure to cause fire (Swan, 2014, p.200), although this theory would need to be tested as it was likely an additive was used to create flame; we certainly have evidence regarding the burning of wooden structures within some of the hillforts partially excavated (Cunliffe, 1993, p.200).

The first experiment was to create the sling using cow leather, which would have been a common material used in Iron Age Britain (Cunliffe, 1993, p.190), I also wanted to see how practical the sling was by gauging how long it took to make and then comparing that to how much practice it took to get a basic working method. Once this was achieved, I would then further test the slings capabilities (See Figure 1).

Experiment 1
Before constructing the experimental sling, two different prototypes were created from thin cow leather and paracord to work out the most effective design. Both comprised of different loading pouches, the first was a wide strap, the second a circular cup shape; the second proving to be the better design to secure shot.

Using a stopwatch, construction time of the experimental sling was accurately recorded which took 5:26:30, despite the fact I had never worked cow leather before, I found the construction to be relatively straightforward. The leather for the pouch was 0.2 cm thick, the pouch measured at 16 cm in length and 9 cm at the widest point. The cords used were also made from cow leather, measuring at 0.4 cm thick and 80 cm in length. As beads were also common within the Iron Age period (Riley, 2006, p.51), wooden beads were used to secure the slipknot and trigger; making these a permanent fixture (See Figure 2).

A basic working method with the sling was achieved after 1 hour of practice with the prototypes, additional time was also spent to improve technique with the experimental sling.

Experiment 2
For the second experiment, I wanted to measure how far I could throw a ball by hand and then compare my results to how far I could throw a ball via the sling, developing an understanding into the extra velocity the sling provided. For accurate control measures, I used three separate balls, a Golf-ball weighing 44 g to replicate the common sling-stone and a hockey-ball weighing 150 g to replicate a large sling-stone, additionally; a 308-gram ball was made to replicate a ballista-ball, all three were compared to give more insight into what they were used for.

For control measures, I marked the point from where I threw, I then marked the point of where the ball first landed and measured the two points; I also carried out each test three times, this way I was able to record both longest and shortest distance for a fair and accurate understanding. The experiment was also carried out on a large level field, this way I could record the ‘flat range’ and therefore inclines or declines would not affect my results (See Figure 3 and 4).
It is important to point out, the reason for using balls is because they were of equal weight and shape. The sling was under experimentation, not the shot, no two stones are of the same shape or weight; which would have made the experiment inaccurate.

Experiment 3
For the final experiment, I wanted to view accuracy over distance now that I felt comfortable using the sling effectively. I am very aware that due to limited time I will not be able to master the sling, however, if I am able to sling balls within proximity of the target; it would certainly suggest accuracy over distance can be achieved with much practice.

I certainly feel that the sling was a very effective and practical weapon, both quick to make and relatively easy to use, and to my surprise; very accurate. After the distance test I can conclude that the optimum weight for a sling-stone would be between 40-150 g, anything over this weight would not be effective for long range with a hand sling; the heavier would certainly be more for military purposes as opposed to hunting (Harding, 2012, p.195) (See Figure 5 and 6). Clearly through the archaeological record we can see all sling-stones were smooth, natural oval stones appearing to be the most dominant projectile, clay and lead shot were usually of a lemon shape (Marchini, 2016), warranting further experimentation into the different types of shot; such as comparing round against oval. I would be very interested to continue using the sling and to view how my accuracy improves over time, additionally; I feel this experiment has been successful and has certainly given me inspiration for further experimentation in the future.

Hunter, J. and Ralston, I., 2009. The archaeology of Britain: An introduction from earliest times to the twenty-first century. Routledge, 2nd edition.

Sarayder, S. C., 2008. Replicating the past: The art and science of the archaeological experiment. Illinois Waveland Press.

Swan, D., 2014. Attitudes towards and use of the sling in late Iron Age Britain. University of Warwick. https://warwick.ac.uk/fac/cross_fac/iatl/reinvention/archive/volume7issue2/swan/  [Accessed 27 September 2019]. 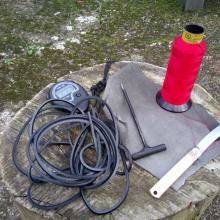 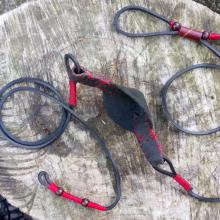 Fig 2. The completed sling. Photo by… 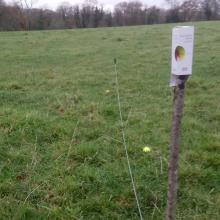 Fig 3. The distance range. Photo by… 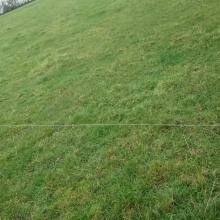 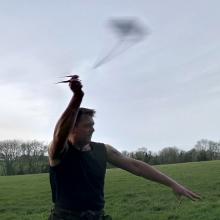 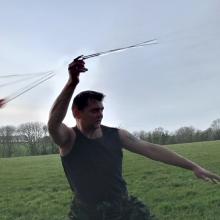 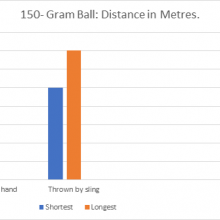 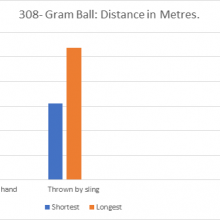 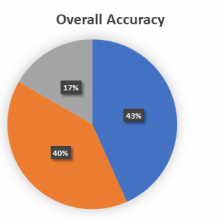