In November 2019, Experimental and Experiential Archaeology made its debut as an independent session at the ASOR Annual Meeting in San, Diego, California, USA, featuring research done in the context of the ancient Near East (http://www.asor.org/). The session was organized by Tracy L. Spurrier from the University of Toronto who has been dabbling in modern lost wax bronze casting in order to research how King Sennacherib cast colossal bronze statues in 700 BC Nineveh (northern Iraq, ancient Mesopotamia). This inspired her to start a session for other archaeologists exploring experimental and experiential archaeology in the ancient Near East and the ASOR meeting was a perfect North American outlet.

Overall, this was a fascinating session introducing the ASOR audience to a number of Experimental and Experiential activities based on the ancient Near East.

The session included a variety of talks covering a range of locations and time periods. It began with an examination of soundscapes reconstructing clay sistra from Bronze Age Crete, followed by experiments in stone and metal tool use for food production, testing what was used on animal carcasses in Early Bronze Age Israel and Anatolia. The third talk used experimental archaeology as a pedagogical tool to teach field school students how clay pots were made in Neolithic Georgia. The final paper explored how experiential archaeology can be used in the classroom to encourage students to better engage with our ancient past.

Alexandre Pinto from Paris 1 Panthéon Sorbonne presented a research paper titled Experimental Approach of the Cretan Clay Sistrum which documented experiments in conjunction with the Laboratoire de Tribologie et Dynamique des Systèmes (Ecole Centrale, Lyon) reconstructing clay sistra based on the examples found in the Haghios Charalambos’ cave on Crete, dating to the Middle Bronze Age (2100/2000-1900 BC). Sistra are sound instruments known as idiophones, akin to rattles, mostly known in ancient Egypt and the Near East where they are made from alabaster (e.g. Teti’s sistrum, 24th century BC) and bronze (e.g. Horoztepe sistra, end of 3rd millennium). The only clay examples come from Crete. The purpose of the study was to recreate their production methods, use, and sound.  The experiments included simulation models and macroscopic and microscopic studies in order to analyse wear patterns for reproduction. The overall objective was to understand the use of sistra in the ancient Aegean world as both an instrument and a symbolic object.

Tiffany Okaluk from the University of Manitoba presented research on behalf of herself and her colleagues Haskel Greenfield (University of Manitoba), Tina Greenfield (The University of Saskatchewan), Aslihan Yener (ISAW), and Aren M. Maeir (Bar-Ilan University) in a talk titled Axe technology in the Early Bronze Age Near East: An Experimental Study to Identify the Raw Material of Ancient Axes used in the Butchering Process. This research focused on the transition from chipped/ground stone axes and adzes to metal axe technology in the Early Bronze Age Southern Levant and Anatolia (3600-2000 BC) used for processing animal carcasses for food. The research explored butchery marks on archaeological faunal assemblages and addressed the problems of recycling and reuse of metal for tools and objects. Modern chopping experiments were conducted using chipped stone, ground stone, copper and tin bronze axes to create tool marks that can be compared to those found on ancient bone and wood in domestic contexts. The results were compared to two vastly different assemblages, the first Göltepe, the village site connected to the Kestel tin mine on the south central Anatolian plateau, and second Tell es-Safi/Gath, a large fortified urban tell site in the central Shephelah of modern Israel.

Moving east to Neolithic Georgia (6000-5000 BC), Natalia Handziuk from the University of Toronto introduced us to ceramic production experiments conducted with Khaled Abu-Jayyab (University of Toronto) in the paper, Experimental Pottery Making as a Pedagogical Device for Understanding Chaîne Opératories: Results from the Gadachrili Gora Regional Archaeological Project (Republic of Georgia). At their field school in May-June 2019, Natalia and Khaled used local clays, tempers, and fuel to give students a “lived experience” in how to make the pottery they were excavating. By actively engaging with pottery production, students are introduced to the concept of the chaîne opératoire in material studies by leading them through the stages of clay sourcing and preparation, vessel shaping, smoothing, decorating, and finally firing. The stages were determined from archaeological analysis of ancient ceramics and current local material acquisition. Their work is further explored in the current issue (35.1) of the Archaeological Review from Cambridge: Pottery making as an experimental pedagogical device for understanding the chaîne opératoire: Results from the Gadachrili Gora Archaeological Project (Republic of Georgia).

The final talk of the session explored the pedagogical benefits of Experiential Archaeology with students. Tate Paulette from North Carolina State University presented his paper, In Defense of Underwater Basket Weaving: Experiential Archaeology in the Classroom, discussing reconstruction activities he conducted with his undergraduates that included making clay cuneiform tablets, grinding grain, crushing grapes, pressing olives, cooking, brewing beer, wine and mead, knapping flint, carving soapstone, chiselling limestone reliefs, weaving textiles, spinning wool, carving bone flutes, and making ceramic vessels. He discussed how this experience dominated course evaluations in a positive way. Tate found that students truly engaged with this hands-on experience of learning ancient techniques and benefited from the different style of active education, with the students often recommending more of this in future courses. From this teaching experience, Tate has concluded that active, embodied, multisensory, experimental, experiential learning belongs at the centre of archaeological education and that key dimensions of past materials, artifacts, architecture, foodways, et cetera, can only really be learned through direct bodily engagement.

Overall, this was a fascinating session introducing the ASOR audience to a number of Experimental and Experiential activities based on the ancient Near East. Hopefully, there will be enough interest to regularly include this session at future ASOR meetings. 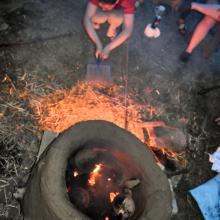 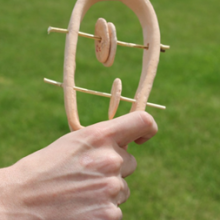 Fig 7. Working on the sistrum's… 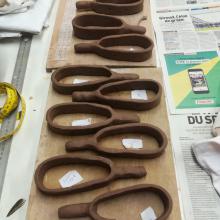