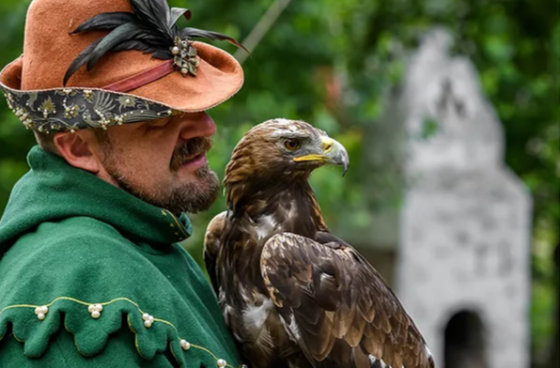 Medieval falconry - meet the fantastic and impressive birds of prey up close.

One of the most popular pastimes and sports of the Middle Ages, if you were a nobleman, was to go on a hunt with the aid of birds of prey. This can be seen depicted in many contemporary illustrations.

Not many people in Europe are still working with the old method of hunting with falcons from horseback, but the Medieval Center has invited a very skilled and professional Czech group to come and show off their birds of prey.

The group Falconia, which in addition to the crew members also consists of several horses and 8 birds, will come to the Medieval Center, live in Sundkøbing, and do two big falconry shows per day.

There will be one show in the morning and one in the afternoon. There will be a Danish commentator on all shows, but the group also speaks very well English if you are interested in more knowledge about the birds after the show.

The group specializes in historical hunting on horseback with birds of prey, as was done in the 15th century, and for the many shows, they will take the audience on a journey back to this time, when hunting with birds was the preferred hunting method among the nobility.

Getting the horse, bird, and rider to work together to achieve success in the hunt is a feat, and it’s almost like watching a beautifully performed dance.