Night of the Celtic Fire 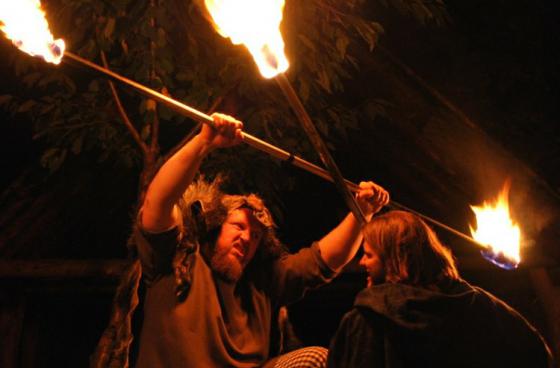 Fire was a valuable element at all times. The "Night of the Celtic Fire" on 13th October in the Urgeschichtmuseum MAMUZ is an evening where visitors enter the legendary world of the Celts.

When numerous fires illuminate the archaeological open-air scene, gentle harp music and drums create exciting rhythms, a mysterious atmosphere is created in the Urgeschichtmuseum, which enchants and revives a long past. The Celtic warriors reproduce historical traditions, fairy tales and myths are told in the light of the torches, accompanied by fabulous music.

The guardians of the camp and house fires in the Celtic dwellings show visitors early Celtic handicrafts. The fairgrounds tell about the way of life and the diet in the time of the Celts more than 2,000 years ago. And in every prehistoric dwelling there is something else to see, so the craft of forging, coloring and pottery is shown. Visitors can also try out their own handcrafts, for example casting pewter, embossing wood and drawing candles. How fire with the Celts was made - with fire-rock and steel - is also part of the program!