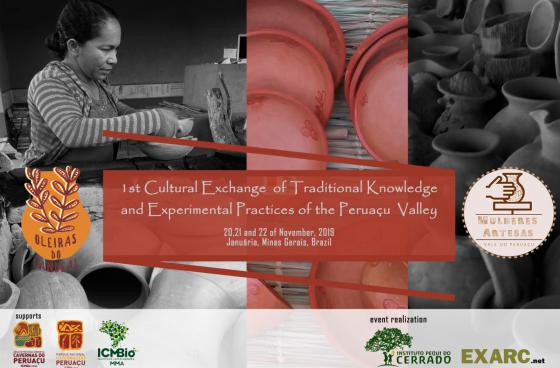 The objective of this event is to promote an exchange of knowledge of the pottery production between two communities from the Peruacu’s river valley in Brazil.

The first one, “Oleiras do Candeal”, is an ancient community which has passed on its traditional pottery techniques through generations. The handcrafted production and adornments are made with the natural resources that they find in their territory. In the past, their pots were used to keep water safe for the very dry period in the region, which can last over six months.

The second community is located at the Peruaçu’s National Park entrance portal, and is called “Fabiao I”, a social initiative. Their traditional lifestyle has suffered from social conflicts resulting from the creation of the National Park. Today, in the environmental preservation area of APA Cavernas do Peruaçu and around Peruaçu National Park Caves, a group of women have started to think about job opportunities for their locality by producing arts and craft. They are looking for new activities that can give financial support for their children's education.

This proposed cultural exchange of experiences and traditional pottery knowledge in an experimental workshop model will benefit both of these communities. The exchange will culminate with a peculiar activity, a visit to the archaeological sites inside of the preservation area. There, they will see the prehistoric rock art made by the indigenous people who occupied this territory before. One element the two communities have in common with their archaeological predecessors is a certain paint, used for adornment of the clay vessels, called toá. Will these communities find other similarities with the archaeological monuments? Let’s wait and see.

The activities were developed under the mediation of Instituto Pequi do Cerrado with institutional support from EXARC. Representatives of institutions such as the Handicraft Center of the municipality of Januaria will take part. We will also see the ICMBIO manager as representative of the conservation units APA - Peruaçu Caverns Preservation Area and Peruaçu Caverns National Park.