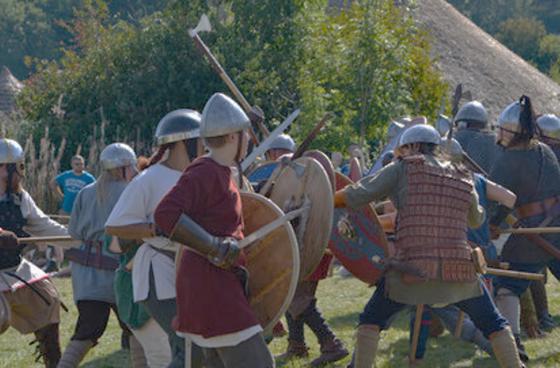 An action-packed weekend as Anglo-Saxon group Herigeas Hundas  defend the magnificent Butser Saxon Hall from the marauding Vikings of Wuffa, back for a second attempt to claim it for themselves!

DURING the Dark Ages in Britain, a terrifying new enemy launched blood-thirsty attacks on these shores, leaving a trail of panic and fear in their wake.

The Viking raids saw invaders from the North pillaging all over the UK, including in Hampshire.

But they were not the first Pagan invaders to wreak havoc on these islands. After the Roman’s deserted Britain many decades before, war bands of Angles, Saxons, Jutes and Franks made their way to these rich lands to make their new homes, forcing back the native Britons as they went.

These invaders became the Anglo-Saxons, and the new enemy was familiar to them - they shared the same ancestors.

This September, the Viking horde of Wuffa from Suffolk will make the journey to the prosperous Hampshire farm of Butser, planning a raid to take it for themselves, by whatever means necessary.

But Butser have a fearsome war band of Anglo-Saxons, the brutal Herigeas Hundas who call these lands their home and are prepared to fight to the death to keep what they hold sacred! In 2019 the Vikings were defeated in their attempt so this time there is a score to settle!

Don’t miss this unique opportunity to see these two titans of history do battle in the grounds of Butser Ancient Farm, with Herigeas Hundas defending the magnificent Saxon hall from the marauding Vikings of Wuffa!

Get up close and personal with vicious warriors from both tribes, and touch, smell and see the day-to-day events of camp life, both on the road to war and in an established settlement.

There will be living history talks, crafts, traditional skills, combat and archery demonstrations on throughout the weekend, culminating each day with a final battle as the Vikings make their attack on the Saxon hall.

Can Herigeas Hundas defend their settlement and keep the beautiful mead hall at Butser safe, or will the Vikings of Wuffa be triumphant and drive out the Anglo-Saxons for good? Only a clash of the shield walls will decide!