The Somogy Provincial Association for Nature Conservation (SPANC) has organized the fourth Iron Smelting Camp in Hungary between 28 July and 1 August. The accommodation was in the ‘Kund-castle’ and food was provided by SPANC. The camp was in the location of Somogyfajsz (40km south from Lake Balaton) where archaeologists have found archaeometallurgical evidence of medieval iron smelting and where a Bloomery Museum was also erected over an excavated workshop (See Figure above).

After visiting the Bloomery Museum we built replicas of archaeological findings of embanked shaft furnaces.

The 27 participants of the Iron Smelting Camp (consisting of groups such as students from universities, smiths, archaeologists, and engineers from Hungary and abroad) could experience the revival of the early medieval metallurgy in a beautiful place with forests and brooks (See Figure 2).

We had only the necessary tools for iron smelting and forging, three cubic meters of firewood and the goal to produce forgeable iron blooms by the end of the camp. During the first days of the camp charcoal was burned in a charcoal pile for the bloomery and forging process, and we collected bog iron ore from the nearby iron ore deposit found in a brook (See Figure 3).

After visiting the Bloomery Museum we built replicas of archaeological findings of embanked shaft furnaces. In the second half of the camp we smelted the collected bog iron ore with the use of the burnt charcoal (See Figure 4).

Finally on the last day, we forged iron products from the iron blooms (See Figure 5).

Fig 1. Visit at the Blommery Museum 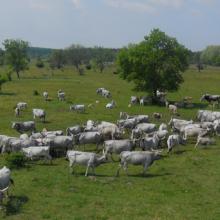 Fig 2. The site of the Iron Smelting… 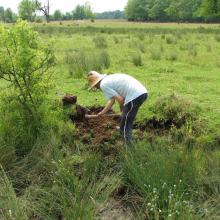 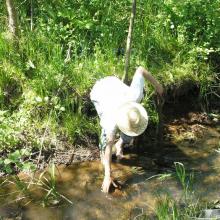 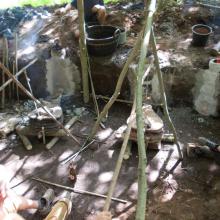