From the 27 July to the 6 September 2015 the Stone Age Park Dithmarschen (Archaeological-Ecological Centre Albersdorf, AÖZA) organised a Mesolithic living history experiment in its newly constructed ‘Mesolithic Settlement’ finished last year. The experiment sought to investigate, through careful reconstruction, how people may have carried out their daily lives in the Mesolithic period. All activities and reconstructed material were scientifically documented under the supervision of Dr Linda Hurcombe by archaeologists from Exeter University in Southwest England (an OpenArch project member). The scientific results will be published by Exeter University while its detailed documentation will be published by the Stone Age Park, both in the form of a magazine and a brochure.

One specific challenge that the participants faced was living in very close proximity to one another with very little privacy for an extended period of time; a problem necessitated by Mesolithic living. The group overcame these problems extremely effectively and with great professionalism—regularly integrating new members into the experiment conditions.

The aim of the project was to reconstruct the everyday lives of hunter-gatherers inhabiting Mesolithic Northern Europe around 7 000 B.P. as accurately as possible. This was achieved by enlisting the help of a number of skilled historical re-enactors and experimental archaeologists from across the world who, through living as Mesolithic people for a number of months, would answer a number of questions and test a number of aspersions about life during the Mesolithic. For example, one of the primary aims of the experiment was to investigate the effects of a Mesolithic diet on human health and what foodstuffs eaten in the Mesolithic are still readily available today. Although the experiment aimed for authenticity there were a number of limitations in following a Mesolithic diet; due to both carrying out the experiment in the confines of an Open Air Museum and in a society where constraints are placed on activities such as hunting and fishing which would have been primary sources of food during the Mesolithic.

During the course of the experiment a number of smaller experiments and reconstructions took place in order to cast some light on specific aspects of Mesolithic life. All the tools and materials used during the experiment were accurate reconstructions based upon excavated archaeological material and one of the major aspects of the experiment was to test the effectiveness of these tools and whether our modern assumptions about their use were practical. To this end the group took part in a large number of activities that would have played a fundamental role in Mesolithic life. These included food harvesting (fishing, hunting and foraging), food preparation (skinning, smoking and cooking), lodging (creation of shelters and other buildings), boat building (rawhide and log canoe construction), producing cordage and adhesives (making birch bark tar and rope from grasses et cetera), making clothing (sleeping gear and other clothes from fur, leather and textiles), tanning (making leather from fish and cow hides), and finally hygiene (bathing and waste disposal). These activities constituted the core of the experiment and required extensive teamwork, management and cooperation.

A core of between four and five re-enactors and experimental archaeologists lived full time at the Stone Age Park for three months. They were supplemented by a number of others who came in for a period of hours or days as required. The group consisted of people of all ages and many nationalities including people from Denmark, Norway, England and Italy. One specific challenge that the participants faced was living in very close proximity to one another with very little privacy for an extended period of time; a problem necessitated by Mesolithic living. The group overcame these problems extremely effectively and with great professionalism—regularly integrating new members into the experiment conditions.

Communication and cooperation with a number of international institutions such as the Universities of Exeter, Hamburg and Kiel as well as the archaeology department of the County Museum of Schleswig-Holstein over the course of the experiment were vital to its success. The experiment itself also provided an extremely useful and rewarding experience for the participants, not least due to participation between craftsmen and experimental archaeologists of exceptional skill. As a result of this project, new educational programmes for the public at the Stone Age Park will be developed utilizing this talent.

The living history experiment also held great value for the Stone Age Park from a media and publicity perspective. The German Television channel ZDF and the science programme “Galileo” visited the park and documented the Mesolithic experiment. The extensive publicity generated as a result of this brought in an estimated additional 31,000 visitors than would be ordinarily expected (a rise of about 20%).

Further information, results and documentation will be published in the forthcoming months on the website of Exeter University (www.exeter.ac.uk/archaeology) and of the Stone Age Park Dithmarschen.

From the 25 July 2016 until the 7 August 2016 a smaller “Mesolithic Living“ experiment will be undertaken in Albersdorf, but again with scientific support and an international team of archaeologists and re-enactors. 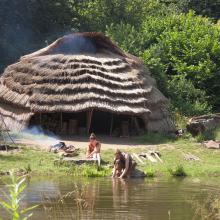 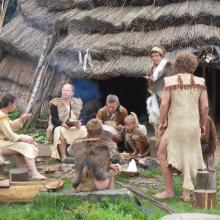 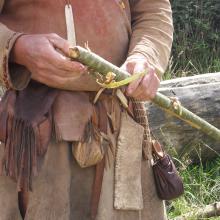 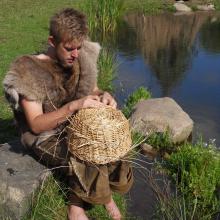 Book Review: Förestallningar om det Förflutna by Bodil Petersson. Imaginations of the Past, Archaeology and Reconstruction
Book Review: The Art of Prehistoric Textile Making: The Development of Craft Traditions and Clothing in Central Europe by Karina Grömer
A Broken Leg in the Year 1350: Treatment and Prognosis
The Steinzeitpark Dithmarschen (DE): Concept and Development of a Visitor Oriented Educational Centre for Sustainable Development
Obituary: Janis Apals (17 September 1930 - 21 February 2011)