A Playground Amongst Museums - The Bauspielplatz: from an Open-air Youth Centre to a History Experience Site - an Unusual Development

Bauspielplatz Roter Hahn e.V. (registered association) was founded in 1998, and the playground opened in 1999 in a district of Lübeck called Roter Hahn. This district has a very mixed population. In the 20th century it could be called the district of the ‘working class’. Since industry and ship construction disappeared, things have changed. There are now many unemployed or low-paid people and many people with an immigrant background, so this is the right place for a Bauspielplatz.

By reconstructing more and more buildings of the era of about 1000 AD and focusing the craft-like activities of the children and adolescents on ancient crafts and techniques, the Bauspielplatz has now evolved and is still evolving into something different

Being a Bauspielplatz [adventure playground] usually means that children have a place to meet, play, be creative, get in contact with animals and nature and even do ‘dangerous’ things - with some pedagogical guidance. It is part of local social work, similar to a youth centre. What we do is called offene Jugendarbeit [open youth work] and means that all activities are an offer to the youth and participation is voluntary. The daily activities at Bauspielplatz are done free of charge for the participants. Craft-like activities are a main constituent of this pedagogical work, especially the construction of wooden huts. There are also animals like draft horses, goats, sheep, geese and chickens that have to be taken care of (by the children) and they do their part in the pedagogical work. There are activities involving the horses on every Tuesday. This can be riding, but this can also mean cleaning up the corral or combing the horses.

A while after the start in 1999 something really remarkable happened: the Sommerfest [summer festival], an inherent part of the year’s schedule since then, became the original trigger for evolution into a history experience site. There had to be a motto for the festival that would be attractive for young people. It could have been Astronauts, Native Americans or whatever, but The Vikings are coming! was chosen. Vikings are not really local in Lübeck, so we found out ‘Slavonic’ would be a better topic for future activities. However, for the first event, a Viking age pit house was built with the help of archaeologists from Hamburg and Lüneburg and the participation of the children and adolescents.

By reconstructing more and more buildings of the era of about 1000 AD and focusing the craft-like activities of the children and adolescents on ancient crafts and techniques, the Bauspielplatz has now evolved and is still evolving into something different, a Geschichtserlebnisraum [a history experience site]. All the reconstructions and the teaching concerning them are based on archaeological finds and developed in cooperation with archaeologists. The history experience site is not a ‘fantasy land’. However, the approach to teaching may be a little different to the way more conventional museum do their educational programs. It is more participatory, more relaxed and less ‘top-down’, but not less serious about historical facts.

The buildings are: a loghouse (based on finds from Kücknitz), a Viking longhouse (Elisenhof, still not local but we wanted one), a posthouse, a barn and a church. The aim for the future is to keep this combination of being a youth centre and an institution for historical education. The medieval themed ambiance is an incentive for the youth to try out crafts, play games like kupp instead of computer games and make things themselves instead of just consuming. ‘Modern’ activities like playing football are still taking place. So it’s not all ‘history stuff’ but … “something medieval” is always a good answer to the kids’ question, “What can we do now?”

Starting in 2012 the site is open on Saturdays for a different kind of visitors: adults visiting it as a museum. Activities on these days rely on the help of skilled volunteers, including re-enactors. By the way, the site is never really closed. There is no fence around it. Cases of vandalism and malicious damage are surprisingly rare.The Bauspielplatz is now quite well known as a place for education among the schools in the region. The co-operation with the local museums still could be improved. Here the name of a ‘playground’ sometimes makes communication difficult. School classes are booking educational programs that will range over the next school year or half of the school year. These programmes give the opportunity to focus on different aspects of medieval life (crafts, food, clothing) at each visit instead of just touching on them shortly. Every program ends with two questions: “Did You learn something?” and “Did you have fun?”

Other classes and groups of visitors book ‘single visit’ programmes that take three to four hours and can only give a short insight into medieval everyday life. These programs started in 2007 and are still being developed.

Modules of the educational programs are (for example):

Who is doing all this, and who is paying for it? Two and a half of the jobs are financed by the municipality of the city of Luebeck. Now there are five and a half jobs shared by eight employees. The extra costs are financed by foundations (Possehl-Stiftung, for example) and donations. Two volunteers are spending a voluntary year focusing on ecological issues and a voluntary year in monumentprotection. The fees paid by the school classes (usually 50 Euros for a morning) do not cover costs, but at least make a contribution. There are about 11,000 children visiting the site during the regular opening hours. In 2012 more than 2,000 schoolchildren visited the site as part of their history lessons.

The next steps in the development of the site will be completing the main building that contains storage rooms, offices, a ‘multi-purpose-hall’, a kitchen and building a complete 12th century monastery. The church St. Nicolai, the first part of the monastery, is the reconstruction of a wooden stave church from the 12th century. Churches like that were the predecessors of the famous brick churches in Lübeck. The model for it is the Haltdalen Stave Church, now on display at the Sverresborg museumin Trondheim. The church was built in 2007 with the help of craftsmen, archaeologists, apprentices and lots of volunteers. It was put into service in 2008.

The construction of the monastery - starting in 2014 - will again be done with the help of people of any age and various cultural backgrounds who will also have the chance to bring in their own special skills. The monastery will be a good place to show, teach and experiment with various aspects of medieval life - like in a little city. During the construction we would like to see a living medieval construction site.

And when the monastery is finished, will this be the END? Definitely not! Never being completely finished is an integral part of the project as a whole. 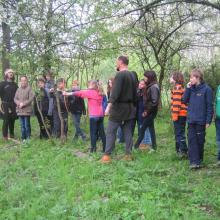 Fig 1. Archery with pupils during a… 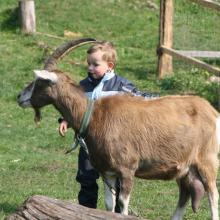 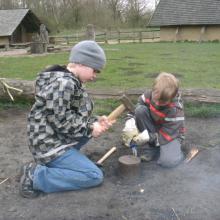 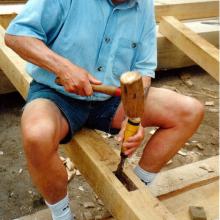 Fig 4. Even older people can…

Fig 5. The site is open on Saturdays…