From Wax to Metal: An Experimental Approach to the Chaîne Opératoire of the Bronze Disk from Urdiñeira

The so-called ‘Treasure of A Urdiñeira‘ (A Gudiña, south-east of the province of Ourense, Spain) consists of an assemblage of three metal artefacts: two gold bracelets and a bronze button or disk, dated from the transition between the Late Bronze Age and the Early Iron Age. This hoard, found by chance around 1921, combines sumptuary objects made of gold and bronze, which are not usually found together in the context of the Iberian Peninsula.

From a morphological and technical point of view, the gold objects were well studied by B. Armbruster (2000), who indicates that the closed bracelet was made by a lost-wax process and with the use of a lathe, and includes them in the Villena/Estremoz technological domain system, from the Late European Bronze Age. Despite its singularity, the bronze object has received less attention than the gold objects, except from the typological point of view.

Based on direct observation and the analyses made on the archaeological material (SEM), we can establish a hypothesis about its manufacture and we propose an experimental approach to the chaîne opératoire of the disk from Urdiñeira. Our proposal revalues the north-western Iberian Peninsula artisans' community knowledge, as it suggests an experimental recreation of the chaîne opératoire with recourse to certain technical uses by these artisans. We aim to test coherent experimental processes and formulate precise questions related to prehistoric technologies.

When all is said and done, to err is only human, and this brings us closer to the men and women of the past who archaeology presents to us as distant.

Previous characterization of the assemblage

The so-called Treasure of A Urdiñeira (hoard of A Urdiñeira) consists of an assemblage of three metal artefacts: two gold bracelets and a bronze button or disk, dated from the transition between the Late Bronze Age and the Early Iron Age (See Figure 1). It was found by chance around 1921, near the small village of Parada da Serra, in the municipality of A Gudiña (south-east of the province of Ourense, Spain). It combines sumptuary objects made of gold and bronze, which are not usually found together in the context of the Iberian Peninsula. The sale of the assemblage caused it to be split into parts and removed from its original context (Comendador & Méndez, 2009; Comendador et al 2011; Comendador et al 2011; Urdiñeira Project 2009b).

No archaeometric studies of these metal objects existed prior to the project. The gold objects were studied by B. Armbruster (2000), who indicates that the closed bracelet was made by a lost-wax process and with the use of a lathe and includes them in the Villena/Estremoz technological domain system from the Late European Bronze Age.

The disk is 45 mm in diameter, has a maximum height of 8 mm and weighs 42 grams. It has a central hole in the shape of a four-tipped star. The convex face has a grooved decoration, whereas the concave face does not present any decoration (See Figure 2). It is well preserved, so it has not undergone restoration. However, it has recently suffered some detachment of material.

It wasmicrotopographically studied by binocular magnifying glass, and afterwards, by Scanning Electron Microscope (SEM) (Philips XL 30 microscope), in the Centre of Scientific and Technological Research Support (CACTI), of the University of Vigo (See Figure 3).

We can observe tiny white colour impurities on the surface, which were analysed for elemental composition by means of a SEM microprobe, EDS EDAX PV9760. It was possible to analyse specific spots on the metal surface. Analysis 1, on one of the white impurities observed on the surface, showed a high content in gold (Au) and somewhat less in silver (Ag). Analyses 2 and 3, on the rest of the mass, showed contents in copper (Cu) and tin (Sn), determining the evidence of a binary bronze, without lead (Pb). The gold impurities observed are imbued in the matter, and are also appreciable where the patina was lost in recent times; this indicates that the impurities were present in the metal at the time of reduction or casting. They can also be observed on the rough finished backside of the piece, so the idea of gilding can be discarded (See Figure 4).

Material is missing on an area of the concave side of the piece. In the two areas of metal failure, possible shrinkage cavities, two appendices appear that could be the remains of the supports for the sprue (See Figure 5). These failures could indicate that insufficient bronze was poured in, or that the degassing process did not work properly.

Our main conclusions are that (Lackinger & Comendador 2011):

Based on direct observation and the analyses made on the archaeological material (the disk), we established the hypothesis of manufacture through a lost wax process (Lackinger, A., forthcoming). In this technique the original model is created in wax and is afterwards covered with clay, making the mould. When the mould is dried and fired the wax is lost, leaving an empty space for metal to be poured. To recover the metal from the mould, the mould has to be broken, being thus only possible to produce one piece in each mould.

For the experimental manufacture of the disk from Urdiñeira we followed the subsequent steps:

1. Model-making from beeswax. Besides the modelling of the piece itself, the addition of sprues (the passage through which liquid material is introduced into a mould) and gas escape channels (See Figure 6, Table 1) was also taken into account and must be moulded in wax. The type of wax used in this experiment was from the caps, which is of higher purity. Its preparation, once it is released from the hive, involves that it has to be boiled in water for a few minutes and allowed to cool, removing the wax layer on the surface. After, the remaining wax is clean and can be worked. In the present experiment, we started with a block shape, where we were able to draw and start working the piece into shape. During this process a heat source was used in various stages, to be able to model the wax into the various parts as well as to smooth the surface. The working time was about three hours and a half for the wax preparation and about two hours for the wax modelling.

2. Construction of the clay mould. The model (composed by the disk piece, casting sprue and gas escape channel) was covered with clay and sand to make the mould (See Figure 7, Table 2). We had first planed the manufacturing of the mould by alternating layers of clay and fine sand, but the labour was more complex than we expected a priori. The resulting moulds, although acceptable, still exhibited some imperfections. Also, during the drying and firing process about one half of the moulds produced broke (next step). This stage of the chaîne opératoire is clearly one where we have to develop better technical solutions.

3. Drying and baking the mould at a similar temperature to that it has to withstand when the molten metal is poured (~ 900ºC) (See Figure 7); removal of the wax from the model during this process (See Figure 8, Table 3). The manufacture of the clay moulds demands an exhaustive control of conditions of humidity and temperature. Part of the problem is the drying time, since if it is too fast cracks can develop. The minimum drying time for a piece of this type was found to be of one week (also dependent on temperature and atmospheric relative humidity). If the piece wasn’t well dried before firing it could break. Generally, time spend in the clay and mould manufacturing was about 10 min for the clay mixing, 15 minutes for coating the wax model with the mould, and between 7 to 10 days for the mould to dry. After the moulds were dried part of them were fired in an industrial oven, and the other part were fired in a traditional (wood feed) oven. There was no significant difference noticed in the moulds fired by these two techniques, apart from their superficial colour, with those fired in the tradition way having a grey and black colour while those backed in the industrial oven having an orange colour. This is undoubtedly due to the direct action of the fire in the first case, causing a more reducing atmosphere.

4. Pouring of the bronze (See Figure 9). First preheating of the mould to a temperature no lower than 200ºC, to reduce humidity at the surface and diminish temperature gradient between the surface of the mould and the pouring metal. In the present experiment the pouring of bronze into the moulds was not completely satisfactory, due to problems with the escape of hot gas and difficulty in the metal entrance and flow. The observations of the resulting pieces showed that metal did not fill all parts of the mould. For future work some improvements have to be done, both in the mould shape as in the experimental pouring procedure. Possibly the casting sprue could be shorter, so that metal reaches faster the interior of the mould, and the mould could be preheated to a higher temperature. Additionally, we could diminish the time spent between taking the metal out of the fire until beginning of the pouring, since a small difference in the order of a few seconds might matter to prevent the bronze from significantly cooling down before the mould is totally filled.

Table 4. Pouring in of the bronze.

5. Cooling and breaking of the mould. Extraction of the piece (See Figure 10). The finished article measures 47 x 13 mm and weighs 101 g (somewhat more than the original).

The experiments carried out demonstrate that the proposed technical process is viable, despite some errors being made in its execution, especially in the making of the moulds.

The technological domain system, together with the accuracy of the work, led us to propose a relationship between both productions (gold and bronze), and even the possibility that they were produced by the same ‘workshop’.

The results of these experiments are applicable both in the field of archaeo-metallurgical research and that of education. We propose incorporating the materials generated in the experiment - graphic and audiovisual material and the 'mistakes' - into didactics and museography, to facilitate the understanding of technological processes. Defective objects rarely make it into museum cabinets, despite the fact that they offer much more information about the technological procedures behind their creation than do perfectly executed pieces (Flutsch, 1994, 11). Rather than displaying only the finished product, if we include the remains of experiments - even failed ones - these elements will allow the Disk of A Urdiñeira to be understood as part of a process. Showing objects in different moments of their chaîne opératoire, or with production process errors, lets us integrate participation and is one of the most interesting strategies to include in the exhibition discourse (Comendador 2010, 298; Lackinger, forthcoming). When all is said and done, to err is only human, and this brings us closer to the men and women of the past who archaeology presents to us as distant.

The Project of Archaeological Intervention in the Urdiñeira Mountain and its surroundings was supported by the Campus of Ourense Vice-Rectory, University of Vigo and County Council of Ourense (REF 2009-INOU-04).

We would like to thank Benito Rodríguez and Jesús Méndez (CACTI, University of Vigo), L. Méndez (Restorer- Museo Arqueolóxico Provincial de Ourense), A. Ramos, C. Romero, F. Bramsteidl and D. Conde for their contribution and participation in this work. 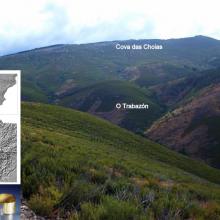 Fig1. Site where the hoard was… 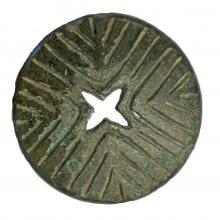 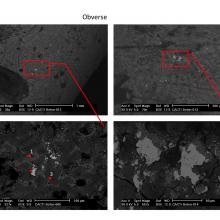 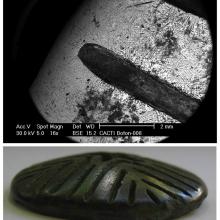 Fig 4. Microtopography and relief of… 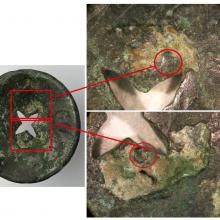 Fig 5. Rear view of the piece with… 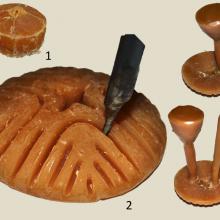 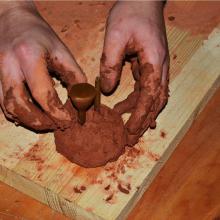 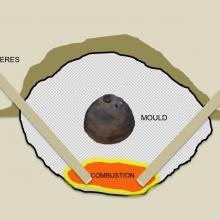 Fig 8. Drying and baking of the mould. 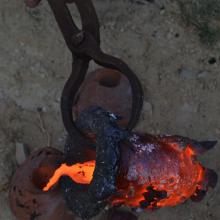 Fig 9. Pouring of bronze into the mould. 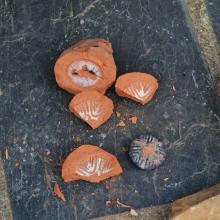 Fig 10. Extraction of the piece from…