Event Review: “Living in the Neolithic” – Impressions from the Experimental Archaeology Days of the University of Hamburg in Albersdorf in Summer 2014

During the summer of 2014 more than 30 students from the Archaeological Institute of the University of Hamburg and four children participated in the practical archaeology week at the Stone Age Village in the Stone Age Park in Albersdorf. In preparation for this week in 2014 – which was the 10th anniversary of this seminar - the students attended a seminar at the University of Hamburg held by the lecturers T. Friedrich and B. Meller.

To be recognisable for the visitors and for various other reasons all participants in the practical week – students and teachers alike – were dressed in linen, woollen or leather clothing.

Being introduced to the basics of Experimental Archaeology (theory and skills), museum didactics (guided tours and hands-on projects) and archaeological background (chronology/period, archaeological cultures and findings), the participants gained an overview of the most relevant aspects of this field. At the beginning of the seminar the students chose one of a set of different task groups, mostly divided by different usable materials, in accordance with their own interest and – in some cases – previous knowledge. The aim of the various groups was to formulate either a museum didactical program and/or an experiment on the given topic. The archaeological contexts, approaches and goals of each group were presented to the other students. Meanwhile, important factors for the lecturers were to provide a framework for students to gain experience in archaeo-techniques and to develop a greater understanding of prehistoric life and materials.

The performances, experiments et cetera. were then realised in the practical archaeological week in Albersdorf, where the students worked during the day at the Stone Age Village or in a school nearby. All of the reconstructed houses as well as the Mesolithic huts were used as sleeping spaces this year. Students stayed some of the evenings at the Stone Age Village to continue their projects, even when official work time was over and the public had left. To be recognisable for the visitors and for various other reasons all participants in the practical week – students and teachers alike – were dressed in linen, woollen or leather clothing. The patterns were inspired by and transferred from Neolithic and Bronze Age idols/figurines/illustrations and burial finds from a central European context. Due to the results from previous experimental work more leather clothes and coloured textiles could be seen on the participants during the practical archaeological week.

As in the years before many visitors from the surrounding area, but also from further away, visited the Stone Age Village during the practical week and participated in the students’ work. Because of the higher frequency of visitors on Saturdays and Sundays, the students’ stay included a complete weekend. During the week participants informed the public about the OpenArch-project as well as communicating their experiences in their respective groups. This was achieved either by answering the questions of passers-by or through guided tours which were held by students on a rotational basis.

Every year the week has a special “theme”. In 2014 the topic was “Daily Life and Feasts”, but not every group was able to transfer this into their projects. For example, some of the students mainly repaired broken objects (the clay oven) or were conserving objects (raw hides, bark) for future use. In addition, archaeological evidence and confirmation was and is essential for all groups and topics, which is sometimes a limitation for the realisation of ideas. By combining findings from different geographical and “cultural” regions, good results could nonetheless be achieved. The idea of “feasting” was taken up in experiments surrounding music objects, the ongoing brewing experiment and the joint work of building a sweat lodge, which thankfully was finished by the last day. The first use and some finishing work were carried out by the museum’s staff – but it is planned to return with the students to have a first practical test.

In conclusion, the group – the students, “women in charge” and the museum staff – had great experiences and considerable achievements during the practical week. The continually sunny and hot weather added to that sentiment. As was the case in the earlier years, some projects will be continued according to chance and necessity. The seminar and practical week will take place in the summer term 2015 as well. 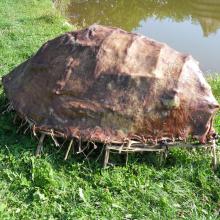 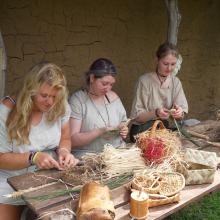 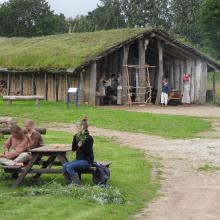 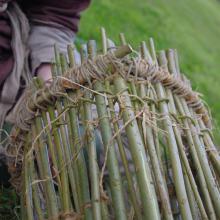 Fig 4. Construction of a fish trap 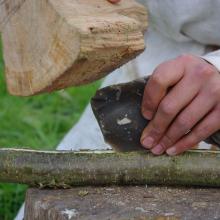 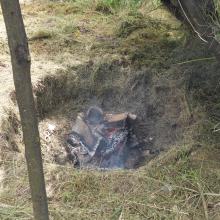 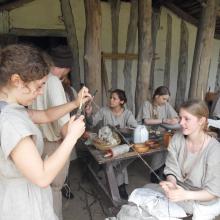 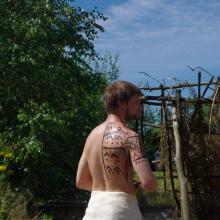 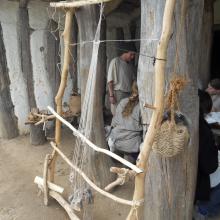