Two new huts in the Stone Age Park Dithmarschen in Albersdorf (Germany) were built in spring 2014 by the Experimental Archaeologist and Educator Werner Pfeifer with the support of some friends and with financial support from the Stone Age Park Dihmarschen and the EU co-financed project OpenArch.

We used the big hut five days a week from around mid of May until the end of September. We had a fire going there nearly every day for about 5 hours each day. We found that the relatively much drier and smoky environment prevented any mould in the interior.

The reconstruction and measurements of the two huts were based on, and inspired by, the recently discovered Mesolithic structures in Middle and Northern Europe (Müller 2012/13, 249-264). The basic outline of the big hut is a rectangle with rounded corners. It is eight metres long and four metres wide. The outline of the small hut is a circle with a diameter of four metres.

Both huts are about four metres high at their highest point. The walls are conical, tapered to a point on the small hut and oval on the big hut. A smoke hole on the top leads the smoke out of the hut. The roof was constructed by setting long arm-thick, green birch (Betula spec., Germ: Birke) branches vertically in holes on the perimeter. They were then bent to join at the top and bound together. Horizontal thumb thick sticks from buckthorn (Frangula alnus, Germ: Faulbaum) were added all around in a grid fashion. This gave the construction a very stable design.

The thatching material for one side of the big house was Gigant Miscanthus (Miscanthus gigantheus, Germ: Chinagras) which we got free from a neighbour. The rest of thatching was done with common reed (Phragmites australis, Germ: Reet, Schilf), bought from a reed thatching company in the vicinity. The thatching was bound with professional natural fibre thatching rope from Denmark. To demonstrate a different technique, the roofs were thatched in visible steps, rather than the currently generally employed ‘smooth’ style.

In order to keep the inner space dry we designed an overlapping entrance.There is no archaeological evidence for this. The angled posts neccessary for this were not dug into the ground but were rest on the ground, leaning against the carrying poles of the inner structure, so would leave no trace in the ground.

To prevent rain entering through the roof the smoke hole also has an overlap. We built the big hut with the entrance and smoke hole opposingthe main wind direction to create draft for clearing out smoke. We had to build the entrance of the small hut into the wind to face the activity area.

The roof was resting on an approximately 20 cm high earthen wall to keep the reed dry. During September we took this wall away as the reed started to become mouldy at the point where the reed met the moist ground. To prevent cold air and water flowing in we built a wall inside the hut alongside the roof.

Usage and observations in summer 2014

We used the big hut five days a week from around mid of May until the end of September. We had a fire going there nearly every day for about 5 hours each day. We found that the relatively much drier and smoky environment prevented any mould in the interior. We had mould where reed and earth touched. Thus we moved the wall inside the hut, creating a very welcoming sitting bench.

Sparks of the fire didn't ignite the reed at all. Therefore, there was no need to create a raw hide spark catch as one sees in some museums.

The birch poles became very dry and brittle by end of this first season; three of them cracked where they were bent most. We think it was because of the weight of the thatch in that area. We replaced these poles with fresh ones and added wooden posts to support them.

As the ground stayed moist in parts of the interior, we added a shallow trench under the roof line. In combination with moving the wall inside the hut this made the ground dry.

The Miscanthus thatching leaked where it was too thin. We had to add reed to some of the thinner parts. There were no problems with the reed thatching.

This hut was dry from the start as we never used Miscanthus here. The roof was made completely with reed.

We moved the earthen wall under the thatching into the hut as well, as the roof started getting mouldy.

As the entrance faces the main wind direction, the wind stirs up the smoke in the hut in such a way that we could never use the hut with a fire on.

The birch poles did not crack. The roof angle is steeper than in the big hut so the poles are less bent. 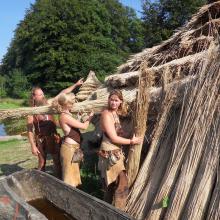 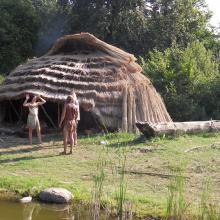 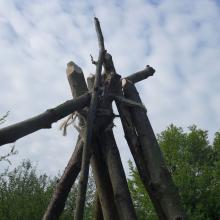 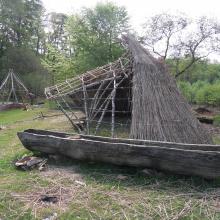 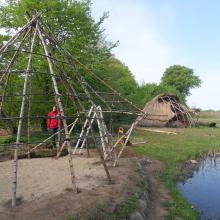 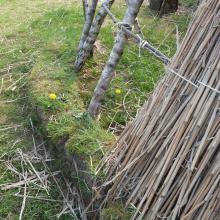 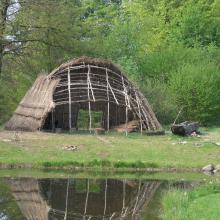 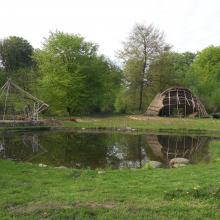 The Iron Age Iberian Experimental Pottery Kiln of Verdú, Catalonia, Spain
The Arrow Quiver of the Iceman Reconstruction Attempts and the Special Significance of the Fur Material
Book Review: Reconstruction, Replication, and Re-enactment in the Humanities and Social Sciences
Book Review: Proceedings from the ReConference 2018
Twenty Years with Flint. The Society for Experimental Prehistoric Archaeology – Where are We Now?