The Value of Experience: Lessons from a Study of Reenactment

At first glance this apparent disarray would seem to confirm many experimental archaeologists’ bias against reenactment. However, it is very important to note that just as for academics, reputation is a strong limiting factor for reenactment groups. Many events, particularly large ones, are invite-only and heritage managers make it clear that they invite only the groups they know to be safe, friendly, and reliably authentic.

Very quickly it became apparent that reenactment—or in a broader sense, the interpretation of the past for a public audience—is not as simple as “emotional journeying” or “illusion” (Reynolds 1999, 134). In fact it is embroiled in issues that museums and the wider field of archaeology also face—those of authenticity, authority, and reflexivity (Barker 2010, 293). Because reenactors are largely outside of the academic sphere, however, their responses to these issues provide a unique perspective. There are experimental archaeologists who prefer the solid reference of numbers over more subjective aspects, such as the senses or suppositions, things that reenactors deal with regularly. In accordance with Mitrovic’s assertion that “contextualisation can be more or less competent and sophisticated,” it is interesting to note that even a highly subjective interpretation of the past can be done with self-awareness (2015, 331).

It is the self-awareness of reenactors, and their creative perspective of the past, that became the primary interest of this research. A mission to understand more about experience in archaeology evolved into a set of questions concerning how to reinterpret experimental archaeology, and how to contextualise the sometimes vehement debate between the two. Though a great deal more questions than answers were found, it is certain that reenactors’ experience imbues them with a reflexivity from which experimental archaeologists and more traditional interpreters could stand to learn.

Ethnography is a study method well suited to the ‘triangle,’ so to speak, of historical interpretation. It deals directly with the relationships between each of the three groups involved, and additionally—if applied reflexively—it can speak to the way interpreters see themselves and their process. This is incredibly helpful for moving forward, especially when applied in areas of interpretation that have been little studied previously.

Accordingly, though an archaeologist, I chose to use a variety of ethnographic techniques in hopes of enriching my field. My approach to reenactment was fourfold: I conducted a short online survey with 160 reenactors over the period of one month; I observed reenactment events of all periods and in different locations across England; I interviewed reenactors, event organisers, and public attendees; and I participated in a reenactment group. My reason for personally taking part in reenactment was a strong conviction that I could not speak convincingly about archaeological experience if I had no true experience of it myself—and additionally, it was through my participation that the reflexive power of ethnography came to light, as my own notes, surprise, and confusion became telling when analysed later.

For the sake of time and space, this paper will focus on the results of the survey. This included both multiple choice questions and written answers; those answers were then subject to content analysis. A method often applied in psychology, content analysis converts words or symbols into statistical data, hunting for patterns such as word associations and word frequencies. These patterns, if statistically significant, can then speak to underlying assumptions or approaches revealed in text.

So much for my methods; my materials for this project were as varied, if not more. ‘Materials’ in this case refers to reenactment groups, of which there are a great many in the UK; established in the late 1960s, what is generally understood as the hobby of reenactment now incorporates some 20,000 members across the country (Giles 2014). Though limited by time and geography, I endeavoured to study as many different aspects or types of reenactment as possible in order to understand the term in its broadest sense. For a list of events I attended, please see Table 1. Many of these events involved more than one reenactment group or even more than one time period.

Fig 1. Dates, places, organisers, and goals of reenactments I attended as an observer.

The trouble with discussing reenactment as a unified entity is that it is anything but. Though there are lobbying groups like NARES and bodies governing individual groups like the Wars of the Roses Federation, there are also many independent reenactment groups. These range from highly-ordered and research-oriented (RegiaAnglorum) to ‘a bunch of friends running around in their pyjamas with sticks’. Some focus on warfare, some on living history; some encourage first person presentation, some abhor it; some are active with other groups in their area, while some keep to themselves.

At first glance this apparent disarray would seem to confirm many experimental archaeologists’ bias against reenactment. However, it is very important to note that just as for academics, reputation is a strong limiting factor for reenactment groups. Many events, particularly large ones, are invite-only and heritage managers make it clear that they invite only the groups they know to be safe, friendly, and reliably authentic.

The group I joined as part of my research was a subset of the Wars of the Roses Federation called the Neville Household. The time period was fifteenth century and the focus lay equally on combat and living history (sewing, cobbling, reliquary, et cetera). For a list of events I attended as part of the Nevilles, please see Table 2.

Fig 2. Dates and descriptions of all activities and events  I partook in as a member of the Nevilles.

The initial questions of the survey dealt with basic demographic information. A brief analysis revealed that of the 160 reenactors who responded, 64% were male and 35% female (with roughly 1% reporting as neither). Additionally the ages of those surveyed focused heavily on the years between twenty and sixty, with only 5.9% younger than twenty and 7.9% above sixty. Most reported was the range 20-29 (31.6%), followed by 40-49 (22.4%). The vast majority of respondents were employed in positions unrelated to heritage or craft (59%), though academics made up the third largest section of the data (9%), just after students (10.2%). Those who were unemployed and retired came in at 4.5% and 5.1% respectively. Most interestingly, respondents showed a higher level of experience than expected (See Table 3).

Table 3: A summary of demographic data collected in the first set of questions on the survey.

Variety evident in the demographic continued to be a trend in the results. Content analysis of surveyed reenactors’ written definitions of ‘reenactment’ revealed a preference to use the term ‘history,’ but also to associate many other factors, such as ‘combat,’ ‘community,’ ‘research,’ and ‘education’ (See Table 4). When asked what resources they would recommend to an incoming reenactor, those surveyed were likely to submit mental qualities as well as true research references (See Table 5).

Table 4. Word occurrences in written definitions of reenactment, arranged from most to least frequent.

Table 5. A summary of the types of resources suggested by reenactors in written answers.

The many layers of reenacting also became evident in an examination of the initial draw of reenactment and what reenactors reported spending most of their time doing. The two did not always match up (see Table 6). That there are factions within reenactment that focus on different aspects of the hobby was also revealed in reenactors’ ratings of the two most important aspects of reenacting, selected from a predetermined list. Out of authenticity, entertaining the public, educating the public, having fun, learning, and safety, roughly 50% of reenactors selected authenticity as one of their two most important aspects, while 38% chose safety for a clear second. However, having a good time was preferred by those with less than two years’ experience, while safety was preferred by those with two to four—and authenticity was deemed most important in all higher levels of experience.

Table 6. A summary of the most popular answers to two multiple choice, multiple selection questions regarding the reasons for starting and the daily practice of reenactment.

Interestingly, while authenticity showed up as highly important, it also was recognised as generally unattainable. A breakdown of responses to the question ‘How authentic can we as reenactors truly be?’ according to years of experience shows that, while less experienced reenactors appear more optimistic, few reenactors truly believe that authenticity is achievable (See Graph 1). Even the majority of those who deemed authenticity one of the most important aspects of reenacting did not believe it was an attainable one (See Graph 2). Those who did not list authenticity as important were more likely to point to ‘having fun’ as a primary goal.

Reenactors’ reports on interacting with the public evidenced less unanimity. In scaled questions (1/never to 5/always) on admitting uncertainty, hearing novel suggestions from the public, and correcting mistakes, survey respondents did not immediately show strong tendencies to any poles. The one exception to this was that no reenactors reported never correcting mistakes, while the majority (41%) reported frequently making corrections, followed very closely by those who reported always correcting mistakes (37%). Uncertainty especially was generally avoided by those with little or with much experience (See Graph 3). Likewise, those who reported more often hearing novel suggestions from the public were those with less than twenty years’ experience, perhaps because they had not yet ‘heard it all’ (See Graph 4).  However, those who admitted uncertainty sometimes (a rating of three) or more were more likely to hear novel suggestions from the public (See Graph 5).

In reviewing the data from the survey conducted amongst reenactors, there are several trends that become apparent. The first, of course, is that reenactment is indeed a very diverse field. Even in a small sample of 160, the age, experience, and opinions of those represented speaks to some of the strife within the hobby—as well as to its potential. The multitude of different voices, sometimes noted for their absence from academic archaeology (i.e. Duke 2007), provide a wonderful source of innovation and connection within reenactment. That said, there is ample opportunity for more research here, particularly into the demographics and goals of particular time periods within reenactment.

The second pattern in the data which I would like to highlight is the amount of effort being poured into reenactment by reenactors. Having come from an academic environment of distrust of experience (see Cunningham et al. 2008, v), it was fascinating to me to discover the sheer amount of years that many reenactors have devoted to reenacting. This experience alone makes them worthwhile sources of perspective, especially from a crafting and enacting standpoint (Dungworth 2013). Additionally, the dedication to correcting mistakes, and at the same time the many elements of reenactors’ definitions of reenacting, speak to the amount of thought reenactors put into reenactment. 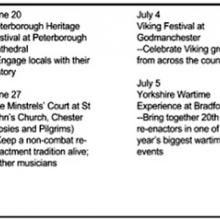 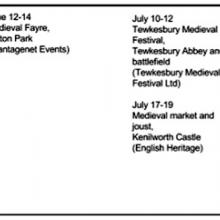 Fig 2. Dates and descriptions of all…

Interview: Björn Jakobsen
Interpreting the Interpreter: is Live Historical Interpretation Theatre at National Museums and Historic Sites Theatre?
Crafting the Past: Theory and Practice of Museums
How to Run a Reenactment - Introduction to Reenactments and Reenactors, Part 1
Event Review: EXARC at the Times and Epochs Festival, Moscow, Russia