I first met Steve in the summer of 1990. I was a student at University of North Carolina at Charlotte (UNCC) following a summer course in anthropology called Southeastern Indians. The course included several field trips, one of which was to the Schiele Museum where we visited the Catawba Village and listened to a presentation by Steve Watts. Whilst in the town house, Steve shot a blowgun dart over my head and I was hooked. Steve probably did this to hundreds of thousands of people over his 32 years at the Schiele Museum, but I was the only one who took blowguns to the next level. I know Steve was proud of me and I was always honored that years later he would buy all of his darts and blowguns from me. I was eventually asked to teach two blowgun workshops at the Schiele Museum, so as a student I became the teacher.

Steve’s knap-ins were themed and were an archaelogist’s dream. A lecture was given about a tool type such as the Hardaway point, and knappers gave their insight into making these type points. Steve challenged his participants to try to replicate one of these points.

I immediately started taking classes from Steve the following year, as his 1990 classes were already full. Steve was in high demand as a teacher.  I took classes with Steve for 25 years and I was present for his last workshop at the Schiele Museum.

I cannot remember exactly when we moved from a student/teacher relationship to real friends, but I am glad it turned out so and honored that he called me a friend.  We went on many road trips together and I will never forget the hours we spent on the road. We went on a six hour road trip to Lynchburg, VA to visit Errett so many times.  We also rode to Boonesborough, KY and other re-enactments.  I was privileged to be asked by Steve to take him to Cradle of Forestry a year ago this September, for his Acorn Patrol event, after he learned about his heart problems. I had a race that same weekend, but I did not think twice about helping him. We went out to eat so many times and I called him at least once a week.  His death created a hole in my heart that I doubt I will ever fill.  This paper is scratching the surface of Steve’s contributions to primitive technology and archaeology.

Steven Mills Watts was born on July 25, 1947 in Cherryville, North Carolina. Actually, it was Gastonia because Cherryville was too small for a hospital at that time. Steve’s parents were Olin and Daphine Watts.  Steve loved to share stories of his great childhood.  Steve grew up in a time when television was becoming more mainstream and Steve had lots of childhood influences from television and literature. These included Tarzan, Robin Hood, Daniel Boone and Davy Crockett.  He particularly loved telling the story of losing a button on his shirt and asking his mother to sew it on.  Daphine had asked him “Do you think Davy Crockett could ask his mother to sew on a button when he was out in the woods?”, so Steve learned to sew on buttons.

Steve was a Boy Scout and his father was his troop leader.  Through Scouts, Steve received his love for the outdoors, Indians and the Golden Age of Camping, but back then it was just camping.  Scouting introduced Steve to Ben Hunt and Hunt’s drawings influenced Steve later in life when he began illustrating his workshop information. Hunt did a lot of Indian costume drawings but also scratched the surface of primitive technology.  This got Steve dancing at Pow Wows and he became friends with many Native Americans.  Steve began actively pursuing primitive technology when he was hired by the Schiele Museum in 1984.

Steve immediately began teaching classes at the Schiele Museum and asked a number of Native Americans to teach classes in order to fill in gaps within his skills range.  Primitive technology was new in the mid 1980’s and it was a struggle to get students for classes. Steve sought out instructors to learn from and found mentors in two individuals, Errett Callahan and John White.

Errett Callahan was a giant in the field of primitive technology and experimental archaeology.  Errett did several projects where he immersed himself and his students in living projects for extended periods using stone tools.  Errett had built lots of prehistoric houses, was an accomplished flintknapper and a bowyer of note.  Steve took from Errett his stages sequences.  Errett believes stone tools could be broken down into stages of manufacturing. Your replica was going to have less chance of success if you could not go through the stages of manufacturing. This stages method was a tool Errett used not only to replicate stone tools but to be a successful flint knapping instructor.  Steve realized this method could be used for all primitive skills and made stages sequences for a number of tools.

John White ran the Ancient Lifeways Institute in Michael, Illinois.  John was a master craftsman, story teller and primitive technologist. John explored his roots as a Shawnee and also his Scottish heritage.  John’s school had Native American style houses along with early European style houses.  John taught skills from both sides of his heritage.  From John, Steve learned that these skills were universal and a shared human experience.

Steve applied both of his mentors’ ideals, making his aboriginal studies program a success. Steve would teach a class in, for example, rabbit sticks. He would then move onto Australian boomerangs and the use of boomerangs from all over the world, like Egypt and Europe.  This would be followed by moving onto America and focus on the Southeast United States.  This allowed Steve to tell the story of the whole human race and put the skills into context because without context, it was just arts and crafts.

Early on, Steve taught skills that pertained to the Southeast, but his interest always grew and Steve branched out.  One thing that Steve did was he would always put a class on his schedule that he had never taught before and knew little about. This forced him to learn a new skill, which he would then be able to teach.

After years of teaching workshops, Steve had covered all of the Southeastern Indian skills. So, he branched out onto tangents.  Some of these tangents coincided with museum exhibits and trips.  These included Plains Indians skills, Southwestern Indian skills, and Hawaiian and Polynesian skills.  Other classes came about because of Steve’s interests.  These included technology of the lower middle and upper Paleolithic, Australian skills, European skills, and his megalithic classes.  Around 2005, Steve began teaching primitive camping skill classes which he named “Kamp Kephart”.  With the publication of his book, “Practicing Primitive”, Steve felt he should close the door on primitive technology and return to his Boy Scout youth and teach Kamp Kephart classes. In fact, during Steve’s last few years of teaching, he concentrated solely on Kamp Kephart classes.

Steve’s knap-ins were themed and were an archaelogist’s dream.  A lecture was given about a tool type such as the Hardaway point, and knappers gave their insight into making these type points. Steve challenged his participants to try to replicate one of these points. Steve went through all of the point types from the Southeast and then moved to worldwide flintknapping technologies.  These included hand axes, spear hafting techniques, and the Ice Man knife. Steve’s knap-ins were educational and this is what made it unique from the others around the United States.

Another contribution that Steve made to archaeology was his house building projects. Steve led a rare level 3 experimental house building project in the Catawba Village. Both of his mentors, John and Errett, also built experimental houses.  Steve did this project as authentic as possible using stone age tools, archaeological evidence, ethnographic accounts and fully documented the construction of the house.  Anyone can build a house, Steve used to say to me, but to maintain one, day by day was the real work.  The house was burned as an act of vandalism in 1983. Steve continued to build several house throughout his career. The documentation of the first house concluded that a dozen people could build a house in a 6-10 day period.

In 1988, Steve met Dave Westcott and they both bridged the gap between eastern and western technologists in America. There were lots of people who were teaching and doing skills out west due to Larry Dean Olsen’s popular classes and books. In the East, there were only three teachers: Steve, Errett and Tom Brown, Jr. An amazing exchange of information occurred during this meeting and a lifelong friendship was formed.

Steve, Dave and Errett were also at the Schiele Museum in 1989 at the forming of Errett’s Society of Primitive Technology.  Dave was the guiding force of their publication called The Bulletin of Primitive Technology. Steve became president of the Society following Errett’s resignation. This Society had twenty five years of publications and produced thousands of how-to and experimental archaeology papers. During the last few years Steve did not publish in the Bulletin, because he was focused on his Kamp Kephart work. When he found out the Bulletin was about to publish its last issue, he put in a drawing as his contribution to the last issue.

Between 1995 and 1999, Steve served as a consultant on the Tom Hanks film Cast Away.  He also consulted and appeared in several History Channel series including Extreme History, Digging for the Truth, Modern Marvels and 101 Fast Foods that Changed the World. Steve used to talk for hours about these experiences.

Steve returned to his European roots and made several trips to Europe. His first trip was to England where he visited megalithic sites, museums and primitive technologists in Europe. His other three trips were to Lejre, an open air museum on the island of Zealand in east Denmark. Here, Steve met technologists from all over the world. In fact both of Steve’s mentors, John and Errett, went to Lejre and I also had the privilege to go there twice.

All of Steve’s contributions to archaeology and primitive technology were concerned with education. Steve was a teacher and made archaeology come alive, it was not solely theory on paper, but tangible skills which were practiced.  Steve was all about telling stories and educating people and he strove to do so his entire life. Some of us got the education over a 25 year period, whilst others in a 15 minute village presentation. Steve had the gift of connected these skills to the world and made everyone he met aware that skills are the window to being human and that all of us are connected by these skills. 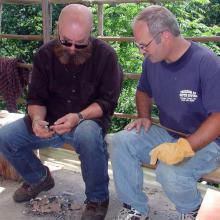 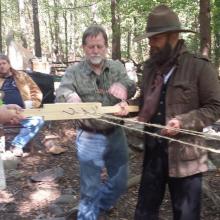