The kiln showed only minor cracks during the firing, but after cooling down, major damage to the interior of the kiln was discovered. The clay from which the dome of the firing chamber was created and which was used to daub the stone construction of the foundation wall, did not fuse and fell apart.

In the initial phase of the experiments we looked for sources of clay in the area around Panská Lhota that would be suitable for pottery production, and possibly for kiln contruction. In the first year the clay used came from the river Brtnice, but it proved unsuitable (Bočková et al. 2014, 121–123). In the following years, sites with possible clay deposits, selected based on geological maps, were tested with the help of a pedological drill. Old brickworks, known from cadastral maps and local names, were also tested. Clays from former brickworks in Luka nad Jihlavou and in Panská Lhota, which are used to build furnaces, were evaluated as the most suitable. The possibilty to use local sources of clay opened up the question of clay preparation. In order to clean the clay from fine gravel, methods of sifting dried and crushed clay and of floatation were tested (See Figure 1). Organic impurities were removed by overwintering. Despite various preparation processes, these clays proved unsuitable for pottery production. The search for more suitable sources of clay is still continuing.

As a part of the research of pottery clay, various additives to the clay body were tested (especially graphite, mica, sand and chaff), as well as the behaviour of various types of pottery clay. For this purpose test tablets were made. These were then fired under controlled conditions in a laboratory kiln, and then the tablets were analysed.

From the summer of 2013, topics concerning vessel forming and experiments using a potter’s kick-wheel, with the pots mounted on bats, were carried out (See Figure 2). Pots made in this way do not need to be cut off the wheel, as they are only lifted off together with the bat. The vessels are then left on the bat to dry naturally. While drying, the pots become unstuck spontaneously. The bats can be attached to the wheel in several ways, depending on the type of wheel used (Bočková et al. 2014, 124–128).

The experiments with pot forming then proceeded with solving such problems as forming vessels on a slow or fast rotating wheel – with turning, profile turning, and pot throwing. Czech medieval archaeology struggles with a considerable degree of simplification of this issue when interpreting the technology of archaeological pottery. To allow for comparison with authentic finds we are preparing samplers documenting the manifestations of specific production techniques on experimental pots.

Since 2014, experiments on decorations and surface treatment of pots have been carried out. We have tested various styluses, making raspberry appliqué or decoration of so-called diamond beaker. We also tested surface treatments using polishing and graphite burnishing (Doležalová et al. 2015, 225–227).

The main part of the experiments concerned pottery firing. At first a functional reconstruction of a medieval pottery kiln, based on the archaeological find from Křížová Street in Jihlava(Zatloukal 1998), was built. The first kiln was built in summer 2013 (See Figure 3) and by August the first firing was carried out. The temperature was measured by a K type sensor, placed in the middle of the kiln. The firing was successful; after an initial slow temperature increase (to finish the drying of both the kiln and the ware) the temperature steadily increased by about 100°C every hour and a temperature above 800°C was reached and held for one hour. The fire chamber was sealed after the firing, but the flue stayed open. The resulting pottery gained an oxidised finish.

The kiln showed only minor cracks during the firing, but after cooling down, major damage to the interior of the kiln was discovered. The clay from which the dome of the firing chamber was created and which was used to daub the stone construction of the foundation wall, did not fuse and fell apart. Another problem was the damage to the stones within the wall of the lower part of the kiln. The weathered, grainy granitoids did not withstand the heat well. Later it was verified with thermogravimetry (TG) and differential thermal analysis (DTA) that the clay material from near the river Brtnice, used in the kiln construction, did not contain enough clay minerals needed for sintering (Bočková 2013, 23).

In 2014 the rest of the dome of the kiln was pulled down, the foundation wall was strengthened, both the foundation wall and the arch of the fire chamber were newly daubed and a new dome was constructed. This time, clay from the former brickworks in Luka nad Jihlavou was used for daubing the wicker construction of the dome. While building the new kiln, the fire chamber was lengthened and the flue moved further to the back part of the firing chamber. Firing in this kiln concentrated on smoke-fired pottery. The making and use of this pottery is documented from at least the end of the 14th century to the beginning of the 20th century. There were three firings carried out in the kiln, each measured with three sensors – at the front, middle and back of the firing chamber.

The first firing took place in the summer of 2014, when a temperature above 800°C was reached and held for over an hour. At the end, the kiln was fully sealed. The result was pottery with a partially smoked surface. The second firing took place in the summer of 2015, but had to be terminated prematurely at a temperature of around 400°C because some of the bricks made from industrially prepared fireclay, which served as a grate, cracked. The collapse of the grate dropped some of the ware into one of the fuel channels. The third firing, in the summer of 2016, was successful; we succeeded in homogenously increasing the temperature in the whole kiln, and the temperature was kept above 800°C for an hour. Overall, the temperature reached in the kiln was above 900°C; in some localised parts of the kiln, the temperature reached 1000°C (See Figure 4). The kiln was sealed again at the end of the firing, and the resulting pottery gained a smoked-metallic glossy surface (See Figure 5, 6).

In 2015 a kiln, based on ethnographic models used for firing smoke-fired pottery (See Figure 7), was built. In this kiln, two firings were carried out. Pottery was fired at 800°C. During the first firing, fresh elder branches with leaves were used to smoke the pottery, and beechwood was used for the second (See Figure 8). The elder branches failed to create a quality smoked surface of the pots, while the beech wood produced black pottery with a metallic glossy surface.

Together with the experiments mentioned above, smaller experiments were carried out. Pit-firing was tested and two firings of prehistoric pottery replicas were carried out in a small clamp kiln. Testing the functionality of pots made became part of experimenting from 2015. Warming milk and water was tried, as well as preparing various porridges. To compliment these experiments a bread oven was built, which was used to bake bread, unleavened bread or meat.

The current equipment of the workplace provides sufficient background for experimental pottery making. There are two kick-wheels (historical and modern), turning bats, thermometers with sensors for measuring firing temperatures, an electric pottery kiln and an electric laboratory muffle kiln. There is basic equipment (cutting machine, grinder…) to prepare samples to analyse experimental and archaeological pottery. A stereoscopic magnifier, polarising microscopes, ED XRF hand-held spectrometer Delta and laboratory scales serve for observing and documenting experimental results. The course of experiments is consulted with potters specialising in this traditional craft. Replicas of medieval finds are made on a kick-wheel by Martin Cvejn.

Since 2014, co-operation, takes place with the Labor für Experimentelle Archäologie in Mayen, part of Römisch-Germanisches Zentralmuseum in Mainz. The co-operation consists of participation at events and experiments. The present research questions concern mostly pottery firing in various types of field kilns, and interpretation of features connected to different methods of pottery shaping on various types of pottery wheels.

The experiments are part of the lectures for ÚAM students,and, as a part of popularization activities, the workplace is presented to the public. Through pottery workshops on medieval and early modern pottery, the centre is open to researchers from other institutions (Doležalová – Mazáčková 2013; Doležalová et al. 2015; Doležalová et al. 2016). These workshops are organised once or twice a year and are run partly in Czech and partly in English. They consist of a theoretical part with lectures by organisers and participants focusing on various topics of interdisciplinary research of medieval pottery, issues of experimentation in archaeology and presentation of studied medieval and modern pottery assemblages (See Figure 9). It is complimented by a practical-experimental part concerning the various phases of pottery production. There are regular firings in replicas of medieval pottery kilns, and manufacturing traces of various forming methods are studied, as well as the influence of different pottery clay bodies and additives on pottery characteristics. There is also experimental cooking in manufactured pottery replicas or bread baking. From 2015, the workshop and experimental pottery production has been organised under the patronage of Department of UNESCO for Museology and World Heritage, Masaryk University Brno. They are complimented by independent publication output within the edition Dissertationes Archaeologicae Brunenses/Pragenseque under the title Workshopy ke středověké a novověké keramice(Workshops on medieval and modern pottery), Panská Lhota 2015 (available online: https://digilib.phil.muni.cz/handle/11222.digilib/135464?locale-attribute=en).

The scientific-research centre in Panská Lhota is part of the Institute of Archaeology and Museology of the Faculty of Arts at Masaryk University in Brno. The experimental pottery production has been taking place since 2012. The main topics are: searching for possible local clay sources used in the past, including testing methods to evaluate their quality; methods of shaping high and late medieval pottery, including analyses of macro- and microscopic traces documenting the forming techniques on archaeological and experimental pottery. The most developed phase of the research yet is the pottery firing, in kilns based on archaeological finds and ethnographic analogies.

The experimental pottery production is accompanied by workshops on high and late medieval pottery, aimed at interdisciplinary research on archaeological pottery. Their aim is to include experiments as a scientific method in archaeological pottery research within the context of the Czech Republic, and to create a discussion platform for specialists studying pottery. For this purpose, the scientific research centre in Panská Lhota is sufficiently equipped. 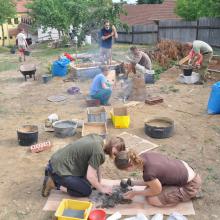 Fig 1. Experiments taking place in the… 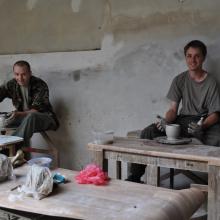 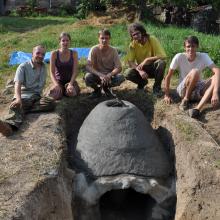 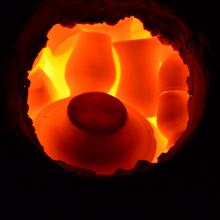 Fig 4. Firing in the reconstruction of… 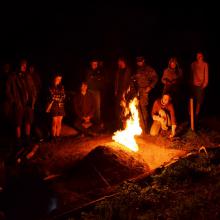 Fig 5. Firing in the reconstruction of… 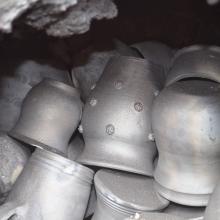 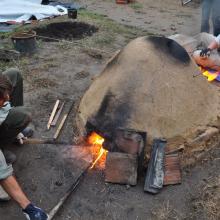 Fig 7. Firing in the kiln for smoked-… 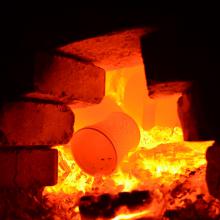 Fig 8. A beaker which fell into the… 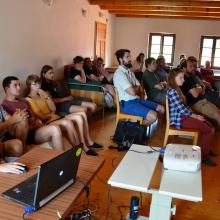 Fig 9. Participants of the 8th workshop…

"But if you don't get any IRON..." Towards an Effective Method for Small Iron Smelting Furnaces
Smelting Conditions and Smelting Products: Experimental Insights into the Development of Iron Bloomery Furnaces
CRAFTER: Re-creating Vatin Pottery 2: an Examination of Clay Quality and its Behaviour
Have you got the tine? Prehistoric Methods in Antler Working
Experimental Archaeology of Iron Age Firing Structures from the Western Mediterranean