Textile Textured Silver Ingots: A Technical Investigation into how these Textures came to be on some Viking Hoard Ingots

The ‘West Coast Cumbria’ hoard, discovered in 2014, is a late ninth/ early tenth-century Viking silver hoard, housed at the Beacon Museum, Whitehaven, UK. It is composed of 20 Viking silver objects: bar-shaped ingots and ornaments, in various stages of fragmentation (PAS ‘Find-ID’ LANCUM-FA14C8). One, complete ingot (museum no. 2016.162.5) bears coarse cloth-impressions on its upper surface i.e. the face that was in direct contact with the mould. How such textile imprints were acquired is somewhat of a mystery.

I wondered about a scenario where a piece of cloth is smeared with mud or clay, a quick trench is carved into the dirt, the cloth placed over and the metal poured. Moisture and hot liquid metal are a bad combination; the metal in contact with moisture usually has explosive results.

Close study of textile imprints preserved on five silver ingots from the Cuerdale, Lancashire, hoard revealed that the imprints were in the negative, meaning that the textile had been in direct contact with the metal. The presence of dendritic formations surrounding the impressions confirms that silver had been in direct contact with the fabric when it was cast ie. the molten silver was poured onto fabric placed in the mould (Graham-Campbell 2011, 82). However, earlier experimental casting of silver ingots revealed that pouring molten silver directly onto fabric caused the fabric to ignite and left no physical trace on the finished ingot (Kruse et al. 1988). I therefore approached David Meyers to see if further experimental casting could shed light on two key questions:

1. how were textile impressions acquired by ingots during the casting process? and
2. what purpose did the fabric serve?

In conversation with Dr. Jane Kershaw, Institute of Archaeology, University of Oxford, she asked if I could investigate the possible causes for the textile texture found on a silver ingot from the West Coast Cumbria hoard shown in Figures 1 and 2. Similar textured ingots were found in the Cuerdale, Lancashire, Hoard, deposited c. 905-10 AD (Graham-Campbell 2011, 82). The pictures and technical information presented here are an investigation into how these textures may have gotten onto the surfaces of a poured silver ingot.

I poured molten silver into the cloth lined mould first. Just as I finished pouring the ingot it began to violently erupt and spit silver. The second ingot was poured into the mould prepared with animal fat. This was less violent than the first although it did flare up somewhat. The third mould that had clay applied to the cloth poured well (See Figure 6). Figure 7 shows the moulds and ingots after pouring.

Looking at the resulting ingots we can see:

From these experiments it is easy to see that the cloth and clay performed the best and gave the best texture results.

Analysis of the West Coast Cumbria hoard ingot shows that the textile pattern goes only part way around it. The ingot made in my clay and cloth mould looks quite similar. I believe the discontinuities in the ingot in Figure 1 may have been caused by charcoal getting from the fire into the crucible and ultimately into the ingot mould during the pour. I have experienced these discontinuities myself (See Figure 11).

For comparison, I show the underside texture of two sterling silver ingots poured into a steel mould (See Figure 12). The ingot surface is pitted but it is otherwise smooth and not granular like the ingots poured unto the cloth and wood moulds.

I wonder if the use of cloth was to expedite the process or was a desperate measure for some reason? I wondered about a scenario where a piece of cloth is smeared with mud or clay, a quick trench is carved into the dirt, the cloth placed over and the metal poured. Moisture and hot liquid metal are a bad combination; the metal in contact with moisture usually has explosive results.

Graham-Campbell, J. 2011. The Cuerdale Hoard and related Viking-Age silver and gold from Britain and Ireland in the British Museum.  London, British Museum Press. 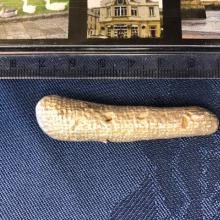 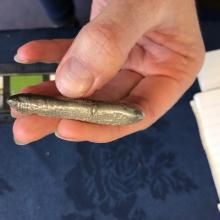 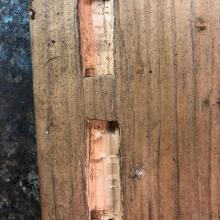 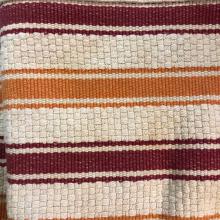 Fig 4. A dishtowel was selected for its… 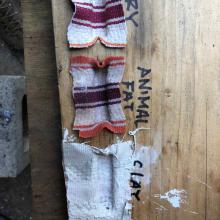 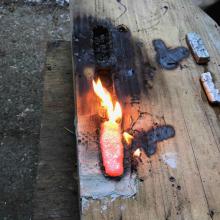 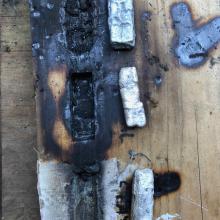 Fig 7. Molds and ingots after pouring. 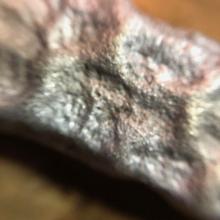 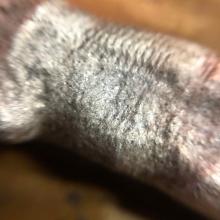 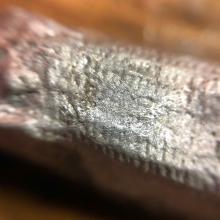 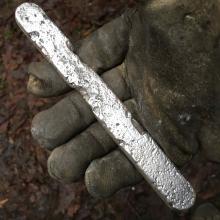 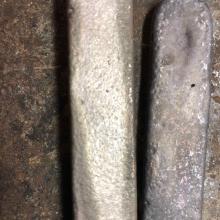 Book Review: A Handbook for Women's Clothing of the Late 15th Century by Anna Malmborg & Willhelm Schütz
An Experimental Approach to Ancient Egyptian Metalworking: The Mysteries of the Sesheshet
A Shared Warp: The Woven Belts of the Lao Han People, China
Conference Review: European Textile Forum 2015
An Experimental Comparison of Impressions Made from Replicated Neolithic Linen and Bronze Age Woolen Textiles on Pottery