Conference Review: Once upon a Time... in Kernave

And so EXARC met again, this time in Lithuania, in Kernavė – an early medieval capital of the Grand Duchy of Lithuania. This picturesque village was the location for the conference “Archaeology for the People” which EXARC co-organised with the State Cultural Reserve of Kernavė and with IMTAL-Europe. The Reserve of Kernavė is an old member of EXARC. IMTAL-Europe is a long-time cooperation partner of EXARC; they are, as is IMTAL-Europe with whom we previously organised a conference. a network for live historic costumed Interpretation.

The mix of people attending the conference, and the program itself, were remarkable: this was a great mix of archaeology, tourism, storytelling and museum management. Good advice and information not only came from those experienced in living history and public archaeology, but also those who are new in the business.

For two days over 40 people from 18 countries listened to papers and took part in discussions, workshops and excursions.

The 18 presentations from various places in Europe and the USA formed an interesting mix. Several subjects were presented, all with connection to visitors: managing museums, managing volunteers, interaction with audience, learning and education, and your story. Some topics repeat over the years, but it was also good to see how the next generation of managers from different museums think and continue with the development of new ideas. It is also nice to see how ideas used in one country can be adopted in another. A few papers also touched upon the subject of Experimental Archaeology, which again - as always -sparks a huge discussion between the participants. Some things never change, others do, and some things which would not even have been considered 20 years ago. The abstracts of all the papers are on line at https://exarc.net/meetings/kernave.

A few presentations worth keeping an eye on to see how they develop were:

An update on a paper by Réka Vasszi, Csiki Pihenőkert (HU) gave an update  of the paper she had previously published with EXARC: https://exarc.net/issue-2018-1/aoam/vacation-past-effective-heritage-in…. She explained the effectiveness of different methods of heritage education: school books, electronic devices and living history. Research showed that after one year, the most effective method was living history.

Črtomir Lorenčič (SI), experimental archaeologist and blacksmith, was caught between the anvil and the public. He addressed the many issues that emerge when working as a blacksmith in an archaeological open-air museum. It truly is a balancing act where it is impossible to satisfy all parties involved: the public, the museum, authenticity and working effectively.

Julia Heeb, Museumsdorf Düppel (DE), explained about how she engages diverse audiences in her museum. Archaeological open-air museums are ingenious laboratories for all kinds of themes and questions. With the right infrastructure, archaeological open-air museums can also function as hubs for experimental archaeology projects. A very important third theme is the relevance of the content for us today. Using all three approaches, a variety of audiences and interest groups can be reached.

Roman Georgiev, from Treasure (BG), gave a truly impressive sketch of the Historical Park in Bulgaria. This archaeological open-air museum is under construction, but when completed, it will be the largest of its kind in Europe. It is a multi-period museum, showing Bulgarian scenes from the Stone Age up to the Middle Ages. One of their challenges, besides building everything, is training enough people to adequately staff the park.

The Friday afternoon program was catered for by IMTAL-Europe. Angela Pfenninger (DE), Chair of IMTAL, with Éva Birkas (HU) gave an introduction to IMTAL-Europe and Live Interpretation as a Method. Their talk set the scene for the following: practical activities in the afternoon introducing basic terminology, an overview of different methods, and different case studies.

Later, the participants were divided in two groups each attending different workshops.

Ingo Glückler, IMTAL-Europe Board (AT) led a workshop on choosing, arranging, and sharing medieval comic tales at historic sites. Storytelling is immensely effective, and why not using existing medieval stories?

Jerker Fahlström, IMTAL-Europe Board (SE) gave a story-telling class where participants learned to tell a traditional story or one of their own. Once one masters certain techniques, almost all stories can be told more easily.

Both conference days we visited different parts of the museum.

The museum in Kernavė, the medieval capital, and current UNESCO World Heritage site, has remarkable artefacts from the area and tells the story of the early days of Lithuania’s statehood in a compelling way.

On Friday we visited the archaeological open-air museum. This was a welcome excursion during which we saw about a dozen house reconstructions, which together formed a little village. During the annual Festival of Live Archaeology, the village truly comes to life and receives tens of thousands of visitors whom experience all types of early Medieval crafts.

Little did we know that on the third day, we would see so much! This was an excursion day to the Historical Capitals of Lithuania. In the legendary Lithuanian chronicles, Kernavė is indicated as the first capital of the Grand Duchy of Lithuania. Trakai is acknowledged as the second capital of the Duchy. Vilnius was first mentioned in the written sources in 1323 as the Lithuanian capital.

We started off by visiting Trakai Island Castle. The construction of the stone castle started at the end of the 14th century, completed around 1409. Trakai was an important political and administrative centre of the Grand Duchy of Lithuania from the 14th century. A notable feature of Trakai was its multi-ethnicity: historically Karaims, Tatars, Lithuanians, Russians, Jews and Poles lived here.

It was almost entirely destroyed, however after WWII it was built up again. Nowadays heavily frequented by international tourists, the site shows the typical life in a European castle in the Middle Ages.

Our second excursion was to the National Museum Palace of the Grand Dukes of Lithuania. The Grand Dukes have resided in the Lower Castle of Vilnius since the 15th century. The building was destroyed by the Russians around 1800. Recently excavated, the Palace was reconstructed from the bottom up in a hugely prestigious project, making the reconstructed historical residence a symbol of Lithuania’s statehood. It is a very large museum which deserves a full day of visitation at least.

The mix of people attending the conference, and the program itself, were remarkable: this was a great mix of archaeology, tourism, storytelling and museum management. Good advice and information not only came from those experienced in living history and public archaeology, but also those who are new in the business.

The local host, the State Cultural Reserve of Kernavė, had done a very good job so we did not need to worry about anything - they had also organised evening programmes introducing great Lithuanian cuisine and excursions. All the logistics were well taken care of.

Thanks to the co-organiser IMTAL-Europe, we were immersed in the world of storytelling and public interpretation.

After an intense three days, we said our goodbyes, and we hope to do something like this again soon! 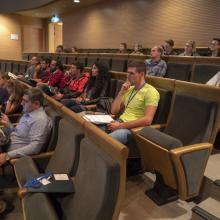 Fig 1. Audience during Conference in… 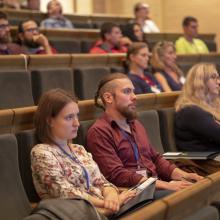 Fig 2. Audience during Conference in… 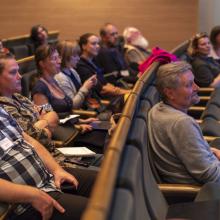 Fig 3. Audience during Conference in… 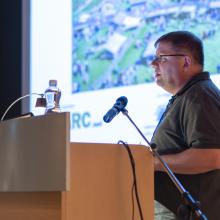 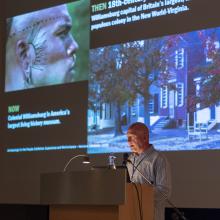 Fig 5. Keynote by Peter Inker from the… 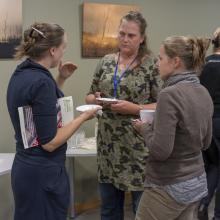 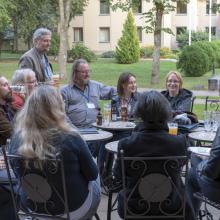 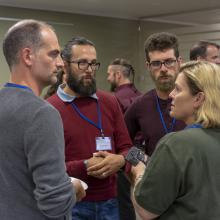 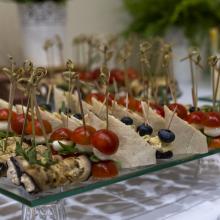