Rauf Ersenal has hiked through the mountains of North Cyprus for years, searching for the rare clays that have been used to make pottery there for millennia. The most prized colours of these clays produce a soft green that is the colour of fresh olives, the bright red of terra sigiliata, and another clay that creates a true black. He processes these clays to recreate the coloured slips that were used for decorating the Bronze Age Vounous pottery of Çatalköy.

The Vounous Symposium created a community of artists who interact with the public, archaeologists, and other scholars to explore ancient crafts and replicate ancient technology. Events such as the Vounous symposia not only provide a venue for the replication of artefacts, but they are also instrumental to understanding the culture and society of the region in the Bronze Age.

In 2014, Rauf Ersenal spearheaded a project in the village of Ayia Irini, on the north-western coast of Cyprus. He assembled a team of 34 ceramic artists to recreate the effigy statues that were excavated in 1929 by teams of archaeologists form the US and Sweden. When the excavations ended, the archaeologists took the ceramic effigies to museums in Stockholm, Philadelphia, and London. The loss of the effigies created a cultural void In Ayia Irini that has been felt to the present day.  The statuary created during the symposium addresses this loss, and today stand on display in front of the municipal building of the village. The project not only returned the material cultural heritage of the region to Ayia Irini, but it also became the beginning of a larger project that has grown to encompass traditional arts, cultural heritage, and experimental archaeology.

From the project at Ayia Irini, the annual Vounous Terracotta Symposium was born. The symposium is held next to the necropolis of Vounous, a Bronze Age cemetery near Çatalköy in the Kyrenia district of North Cyprus. At the first symposium in 2017, 80 artists and craftspeople assembled to study and recreate Vounous pottery, using the same clays and techniques employed by the people from the Bronze Age. The second symposium, held in September 2018, included bronze casting using local clays to produce the moulds and crucibles, and a furnace heated with charcoal and bag bellows. The symposium began with firing pottery in an updraught kiln, similar to what was used in Bronze Age Cyprus. Two days later, the fired pottery was put on display and featured as part of the opening ceremonies, which also included traditional costumes and a torchlight procession. The 2018 ceremony was well attended by the public and by government officials, including the mayor of Çatalköy and the president of North Cyprus, both of whom have put their support behind the project.

The symposium ran for two weeks and included activities for the public that included archery, craft workshops, concerts, and an introduction to archaeology for young people. Many of the artists are professional potters who learned to adapt their style to that of the unique abstract style of Bronze Age Cypriot potters. Participants recreated everything from monumental two-meter-tall effigy statues to playful whistles that imitated bird songs, working in small huts made of cane and reeds that were arranged around the site. Because of the heat, work commenced in the late afternoon and continued well into the evening. Mornings were spent touring North Cyprus and visiting museums and historical sites. These helped to ground the participants in the history and culture of North Cyprus and gave context to the art that they were recreating. In addition, a lecture was given by Sevim Çizer on her research and experimental work, recreating terra sigilata clay bodies and firing techniques that were used to replicate red figure ware pottery.

The objects made at the at the symposia are not only displayed at Vounous, but are also exhibited at the visitors' center at the Girne Castle in Girne/Kyrenia. The figures made at this year’s symposium were also displayed at a special exhibition at the Selimiye Mosque in Lefkosa/Nicosia, North Cyprus.

The Vounous Symposium created a community of artists who interact with the public, archaeologists, and other scholars to explore ancient crafts and replicate ancient technology. Events such as the Vounous symposia not only provide a venue for the replication of artefacts, but they are also instrumental to understanding the culture and society of the region in the Bronze Age. The ceramic figurines and small tableaux such as the Vounous Bowl reveal intimate details of social life and religious practices, and often display a sense of humour. Recreating these figures not only recreates the object, but is also an important element in teaching cultural history through the medium of craft (Yildiz 2018). In this way, the symposium not only provides a venue for experimental archaeology and artists, but also gives visitors new insights into history, and a heightened appreciation for the objects they see in museums.

A third symposium is planned for 2019, and Rauf Ersenal’s vision for the project has includes great plans for expansion. His goal is to develop an open-air museum with permanent workspaces that would be replicas of Bronze Age buildings from the region. Vounous intends to feature workshops, classes, and educational opportunities throughout the year. These would include artist residencies, masterclasses, and crafts workshops, but would also be a resource for continuing research into ancient ceramic techniques and materials. Experimental archaeology would be a major component of the project and plans are laid to provide opportunities for participants to learn about the ancient material culture of North Cyprus. Despite North Cyprus’ loss of antiquities to collectors and museums throughout the world, visitors to Vounous will now be able to see the material culture of ancient Cyprus within the original context of the landscape.

The links below provide more information about the project in Ayia Irini and the Vounous Symposia. 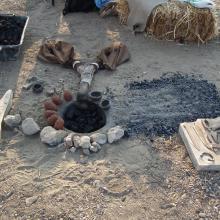 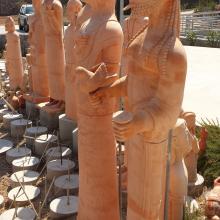 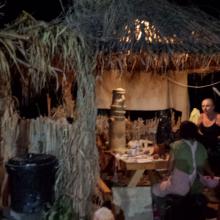 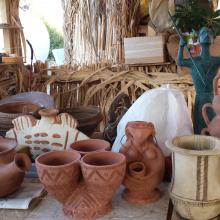 Fig 4. Pottery to be fired. Photo by… 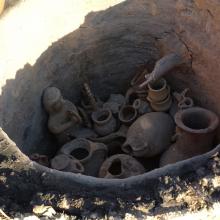 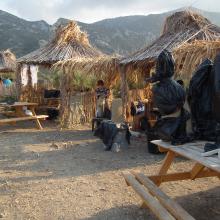 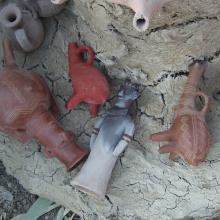