In Indian classrooms, social sciences receive disproportionately less attention than natural sciences and mathematics (Dahiya, 2003; Lall and House, 2005; Roy, 2017). History features within the social science textbooks in India, and is perceived as boring and uninteresting by school children (Roy, 2017; Dahiya, 2003); archaeology is taught as part of the history lessons and is most often not seen as different from history.

There is however a growing interest in ways to disseminate archaeology outside the school classroom. Centres such as the Sharma Heritage Centre based in Chennai, Tamil Nadu, and the Indian National Trust for Art and Cultural Heritage (INTACH) Bangalore chapter, Karnataka, have been carrying out workshops, lectures and hands-on exercises, reaching out to various sections of society, including children.

History and Archaeology in School Textbooks in India

Neither textbooks nor schools are homogeneous; amongst the various affiliations a few are described below. They can be privately funded English-language schools affiliated to the Central Board of Secondary Education (CBSE), English-language government-aided schools affiliated to state level examination boards, or government-run municipal schools (Lall and House, 2005). The National Council of Educational Research and Training (NCERT) “…though an autonomous body, draws up the national curriculum framework and publishes textbooks which are used as models by most state governments” (Lall and House, 2005, p.9). There are variations in the content of history lessons in different textbooks, as well as in how teaching is carried out in the classroom in these various schools (Roy, 2017). The government-aided and government-funded schools form a majority, and in these the history curriculum is outdated. Students find it boring because of the memorizing of events, dates, etc. they are asked to do (Nair, 2005).

A widely read contemporary Indian historian, Romila Thapar (2009, pp.87-88), describes her own journey of writing two history textbooks for NCERT, and she discusses how even 15 years after independence (1947), she was persuaded to write the class VI textbook as a way to help the national cause. She also talks about how this endeavor by NCERT emphasized the need to communicate a secular and rational view of the past, not one based on myths. Subsequently, allegations were made by right wing governments that the textbooks were written by communists, giving examples of historians like Thapar, who had written about beef consumption in India (Thapar, 2009, p.94); similar articles have suggested the inclusion of Hindu religious views by right wing governments (Roy, 2011). Due to limited space, this article will not be able to do justice to these aspects; rather it aims to concentrate on how archaeology is taught in schools and how this affects research in the field of archaeology.

There is however a growing interest in ways to disseminate archaeology outside the school classroom. Centres such as the Sharma Heritage Centre based in Chennai, Tamil Nadu, and the Indian National Trust for Art and Cultural Heritage (INTACH) Bangalore chapter, Karnataka, have been carrying out workshops, lectures and hands-on exercises, reaching out to various sections of society, including children. Similarly, the author affiliated to the Heritage, Science and Society program at National Institute of Advanced Studies (NIAS) in collaboration with Bharath Gyan Vivgyan Samhiti (BGVS) conducted a workshop for children from Government funded schools class VI and VII, as a means to explore different ways of exposing children to archaeological concepts and methods. We also wondered if it matters whether archaeology is distinguished as a discipline independent of history when teaching schoolchildren.

The workshop was envisaged to focus on students from government funded (three) and government aided schools (one); a total of four schools were selected, located within the neighborhood of NIAS where the workshop was held. In three of the schools, the medium of instruction was the regional language, Kannada, and in one it was English. The workshop was conducted for 45 students, who were divided into five groups which were divided randomly so that they would be mixed both in terms of gender but also each group would include students from different schools. The idea was that this would help the students from different schools interact, with each group being lead by one resource person. Resource persons belonged either to NIAS or BGVS, and some of them were experienced teachers (over 20 years' experience teaching various subjects in schools in Karnataka) from outside Bangalore. One teacher from each school was invited to observe the workshop, but was asked not to participate since they tended to get anxious over the performance of the children. The teachers who attended the workshop taught social science and science.
The workshop was conducted over two days. On the first day, a series of activities was conducted to introduce students to basic concepts in archaeology, such as the nature of archeological records, context in archaeology, typological classification of artifacts and connecting objects to events in the past, with a break between the activities.

An example of an activity conducted at the workshop is as follows: photographs taken from the immediate neighborhood were projected on a screen, and these included meat, flower and vegetable markets. They were all located very close to their schools and the children were given 25 minutes to discuss these images (See Figure 1). The instructors were asked to encourage the students to think about what traces would be left behind in these places to help us reconstruct the activities that have taken place in that location. The resource persons were asked to bring up the following questions:

On the second day the students were taken on a tour of an archaeological site, and met an archaeologist who had excavated at the site (See Figure 3). This site was that of a Jain monastery which had recently been excavated by the Archaeological Survey of India, who were very supportive and deputed one of the excavators at the site to talk to the students. During this visit, children were given an introduction to the site. An interactive session proceeded whereby they asked the excavator various questions. He also spoke to them about the importance of context to archaeologists, and why removing artifacts from sites is problematic. The workshop was planned to facilitate interaction between children of different schools; however, we found that language played a major role in how children interacted with each other and with the resource persons. Children from the government-aided school were largely English speaking and tended to be more confident, to the point where they admonished children from other schools for incorrect answers. At the same time, their answers also tended to reference strongly to the history they had learnt in school classrooms or textbooks.

On the third day of the workshop, held at NIAS, we had a meeting with the teachers to get their feedback on the activities and their view on archaeology being taught in schools. Overwhelmingly, the response was that while they found the activities extremely useful, they felt constrained by the amount of content that had to be completed in a short amount of time and by the fact that they could not take the time to explore concepts in the classroom. The social sciences include multiple subjects such as history, geography, political sciences etc. As Roy (2011, p.21) also notes, even teachers' manuals tend to place emphasis on content over concepts in many ways, going back to the notion of memorizing or route learning. Nair (2005, p.1589) and Roy (2017, pp.126-127) discuss how concepts or even content in history is not only derived from the history textbooks, but also through language textbooks which discuss history, or various other sources. In short: when history is marginalized, how much can archaeological concepts be taught in schools when they remain a marginalized part of history? As Dahiya (2003, p.305) says however, archaeology is a great way to talk about the past in a more hands-on and interesting manner. She further draws an outline of how this can be achieved in the school curriculum; initially as a part of history, but for older children as an independent discipline. Including archaeology in schools could also be done through workshops like the one conducted at NIAS. A way that does not burden schoolteachers by adding to their existing syllabus, but at the same time helps to explore a different dimension of the past.

Archaeology in Colleges and Universities

This brings us to the question of why is it important that archaeology is taught as not only a source of history, but rather through history. One of the debates that Indian archaeologist are familiar with is the question of archaeology being placed within the Department of History in Universities, and whether the methodological differences between these disciplines make this problematic. Almost all archaeology is taught within the Department of Ancient History and Archaeology, with the two exceptions being at Deccan College and the University of Calcutta (See Table 1). Most of these departments do not offer a Bachelor's degree, which means that most people will not study archaeology until their Master's degree. All these universities and colleges also have a Department of History; this implies that the syllabus taught in the Ancient History and Archaeology departments is focused mainly on archaeology for the prehistoric (deep time) or pre-medieval (and therefore ancient) period.

Table 1. Archaeology in Universities in India Out of 18 Departments that have archaeology as a part of their name, only two are called Department of Archaeology; in all other cases they are merged with, or a part of, Ancient History.
* M.A., Mphil, PG diploma in epigraphy and PG diploma in Museology, heritage and tourism, PhD
** Department of medieval and modern History
*** M.A. in tourism adminsitration
**** Indian History and culture as well as Department of History

This, in turn, affects the way research is done. For archaeology, it means limited resources for fieldwork and more emphasis on archaeology as a source for certain periods such as Ancient History, rather than being seen as a discipline that frames its own questions, researches various periods and carries out its own analyses. The reasons and ramifications of this are not directly relevant to this paper; however, it provides a background to the space given for archaeology as a discipline, and this is reflected in schools as well. School syllabi also refer to archaeology as a source for history. This means that children are not aware of archaeology as a discipline, or, since it is located within the social science textbooks, see it as a form of history or of social sciences within the history section. Disciplinary configurations are clearly different between schools and colleges/universities; the obvious example is that History is located within social sciences in the former, and within the humanities in the latter. Whether this does in any way change how it is taught is a complex question to answer. Workshops or such courses may be a good way to bridge the gap between teaching archaeological concepts in schools and learning archaeology at an undergrad level, but how archaeology is to be taught in colleges remains to be addressed.

I would like to acknowledge Sundaram Finance who have funded the project Disseminating Archaeology through which this student workshop was made possible. I would also like to thank BGVS, Bangalore for their support and inputs. Of course any mistakes are my own.

Dahiya, N., 2003, September. 20 A case for archaeology in formal school curricula in India. In: P.G. Stone, B.L. Molyneaux and B. Molyneaux, eds. The Presented Past: heritage, museums and education. Routledge, p.299. 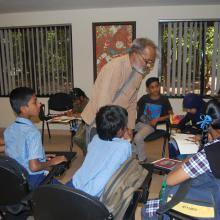 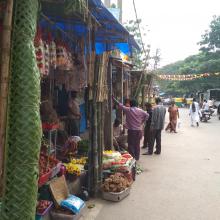 Fig 2. Market near NIAS used in… 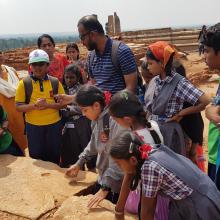