In doing an inventory of ceramic materials from archaeological excavations, it is a common practice to indicate their observable atmosphere of firing. This parameter refers to the presence of gases, especially oxygen, during the firing and cooling of pottery: if oxygen circulates freely, the procedure is said to be oxidising; if, on the contrary, the atmosphere of firing lacks free air, it is called reducing (Rice 1987: 81). The atmosphere of firing affects the physical properties of finished pottery, including hardness, porosity and shrinkage, but most visibly colour (Rice 1987: 81). Nevertheless, the colour range of fabrics does not depend only on firing conditions, but also on the iron content of the clay and its distribution within it (Orton, C. et al. 1993: 69). In any case, the firing atmosphere of a piece of pottery can be classified as oxidising, reducing or alternating when inventorying. In principle, this should facilitate the task of reassembling broken archaeological objects and, as a consequence, their study as a whole. Recognising and classifying fragments based on similar physical properties, such as thickness, temper, fabric colours, etc., is an essential step toward determining which belong to the same individual object. However, this criterion can sometimes be misguiding, especially concerning colour.

The experimental replication of the effects of fire on pottery has decisively shown that secondary firing can completely alter the original colouring of a fabric.

The colouring of a pot used for cooking can be affected by its frequent exposure to the flames and this is something frequently seenin the processing of archaeological materials at the laboratory. In a similar way, fragments of pottery may exhibit colours that differ from those related to its original atmosphere of firing, owing to the uses of the object during its “lifetime” or various post-depositional processes. A pot fragment of dark black fabric, originally baked in a reducing atmosphere, may become brown, orange or reddish if exposed to fire in an environment in which oxygen circulated freely. In the same way, an originally oxidising vessel may blacken upon re-firing in a reducing atmosphere; always depending on the precise firing conditions and the presence and distribution of iron particles in the clay. Thus, if in the course of a past conflagration certain fragments of the same vessel were directly exposed to the action of the flames, while others were not, it may be the case that archaeologists will be able to reassemble into one piece with shards of completely different colours. Figure 1 shows four reassembled vessels from the Early Bronze Age El Argar site of La Almoloya (Pliego, Murcia), whose fragments illustrate this situation.The different shades of colour on re-fired fragments can also inform us about the firing temperatures, in the event that these are experimentally reproduced with the different firing atmospheres with fragments of a pot with similar characteristics. We only need to re-fire samples at known temperatures for a standard time (De Bonis, A.et al. 2017: 8066).

Examples such as the one in Figure 1 show the reality of finding fragments of very different colours that belong to the same vessel. To better understand the process leading to this outcome, an experiment was conducted. A fragment of an old potwith a dark fabric, the product of a reducing atmosphere of firing, was broken into two pieces. Then, one of the new shards was introduced in an electric kiln to be re-fired in an oxidising atmosphere at 1,000ºC (1,832ºF). After the re-firing, the fragment was removed from the kiln. It now appeared completely reddish both superficially and in its nucleus (See Figure 2).

The experimental replication of the effects of fire on pottery has decisively shown that secondary firing can completely alter the original colouring of a fabric. This single factor, by way of conclusion, is highly significant and must be duly considered during archaeological investigations, particularly when working with ceramics from archaeological contexts where conflagrations occurred or are likely to have occurred. Therefore, archaeologists should take this into account when reassembling fragmented objects and their interpretation of how they came to be deposited.

The research contained in this paper was conducted with the support of a FPI-MEC graduate grant (BES-2015-073424), granted to the first author in the framework of the research project HAR2014-53860-P - Political power and violence in the El Argar society (2200-1550 cal BCE). The experimentation was possible thanks to a collaboration between prehistorians and potters, which in turn was a by-product of the dialogue initiated in the course of the project Crafting Europe in the Bronze Age and Today (CRAFTER) (Ref.: 5959355-CREA-1-2018-1-ES-CULT-COOP3 / Creative Europe programme). We believe this is a good example of how local artisans can develop new skills and lines of work, in accordance with the cultural education and trainings priorities of the programme. Finally, our gratitude goes to Miguel Valério for his many suggestions and for improving the style of the text. As usual, all remaining errors and the views here expressed are of our own responsibility.

Zedeño, M.N.,1994. Sourcing prehistoric ceramics at Chodistaas Pueblo, Arizona: the circulation of people and pots in the Grasshopper region. Anthropological papers of the University of Arizona 58. 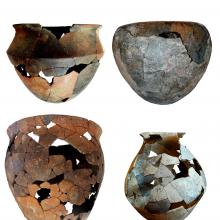 Fig 1. Four vessels from the… 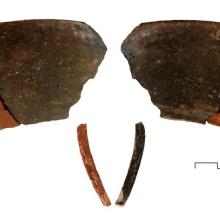 Fig 2. Two fragments of an old pot of…