In August 2018, members of EXARC participated in Moscow’s Times and Epochs Festival for the third year. The annual festival is held on park boulevards that surround the inner city, providing an ideal green space for reenactors to recreate various periods of Russia’s history. The main sites were located in Tverskaya Square, Nikitsky, Passion and Tver Boulevards, on Kamergersky Lane and Profsoyuznaya Street. The festival was spread over 10 kilometres with over 30 locations, hosting over 200 reenactors coming from various European and Asiatic countries. The periods recreated ranged from the Palaeolithic to the 20th century. There were impressive army encampments from the Napoleonic Wars, a Viking village, and medieval Muscovites. The festival also hosts a contest in which the presenters of a winning proposal receives one million roubles to implement their historical project.

The event was visited by millions of people over the twelve days of the festival. Many brought their family out for the day to visit the various historical periods represented by the festival. Such interaction with the public is invaluable. History, archaeology, and experimental archaeology were brought into a familiar public venue, where people learned from and interacted with reenactors, and had the opportunity to handle tools and objects from the past.

Prehistory at Times and Epochs

The Dawn of Humanity was presented on Petrovsky Boulevard as a joint venture between EXARC and Times and Epochs, and organised by Ivan Semyan with the help of local reenactors. This was the first time that prehistory was represented at the festival, and the exhibits were impressive, including a life-size mammoth and a woolly rhino on loan from the Palaeontology Museum. In addition, a pop-up museum displayed ancient tools and objects with EXARC members and local reenactors recreating the crafts and activities of prehistory. Informative signboards lined Petrovsky Boulevard, explaining the different periods that were represented. Visitors posed for photographs with reenactors and had the opportunity to participate in some of the ancient crafts. Carving a log boat using a stone maul with an antler chisel was a popular activity, as was making flutes from Japanese knotweed canes. Visitors also got a taste of prehistoric cooking with samples of Mesolithic stewed pears.
EXARC members, Giovanna Fregni, Wulf Hein, and Theresa Kamper participated with Russian reenactors recreating bronze casting, stone tool making, and leather working. Structures appropriate for their prehistoric periods were constructed to provide shade and shelter in addition to giving visitors a better idea of how people lived during different periods of prehistory. The structures withstood an impressive thunderstorm, sheltering reenactors and visitors caught in the rain, a practical demonstration of how well prehistoric housing functioned in all kinds of weather!

Seeing how other cultures interpret the past provided invaluable information for both the EXARC members and the Russian participants. The collaboration highlighted the differences in techniques, but also the similarity in ways of working with materials to recreate ancient objects. An example was seen in bronze casting. Archaeological excavations have shown differences in the types of furnaces used in different regions, and this was reflected in the types of crucibles used by reenactors and experimental archaeologists from different countries. In Russia and Eastern Europe, the crucibles tend to be flat and round, in contrast to the ones found in Britain which are triangular and bag-shaped. Many of the visiting participants had a limited knowledge of the Russian language, and not all of the Russian participants spoke English. The result was not only an exchange of craft knowledge, but also a demonstration of learning each other’s language, often using gestures and physical objects to communicate.

Times and Epochs and Accessibility

The Times and Epochs Festival is an excellent example of the importance of bringing archaeology and history to the public rather than the other way around. Usually events such as this are held at open air museums, or at special events, that are often distant from urban areas. The event becomes a destination for people who are already interested in archaeology or reenactment. Visitors must have the available time to attend an event, have access to a car or organize a trip by means of public transport in order to visit an event at an open-air museum. Instead, Times and Epochs has reversed this and brought the event to the public. All of the events and displays were located close to bus stops and metro stations. Despite being on busy urban streets, the trees and hedges that lined the boulevards screened the displays and activities from the noise of traffic, thus creating a focus on the  reenactments. Members of the public strolled through the boulevards on their way to and from work or shopping. While most people knew about the event and planned to attend, others were surprised and delighted to discover the festival. The event was visited by millions of people over the twelve days of the festival. Many brought their family out for the day to visit the various historical periods represented by the festival. Such interaction with the public is invaluable. History, archaeology, and experimental archaeology were brought into a familiar public venue, where people learned from and interacted with reenactors, and had the opportunity to handle tools and objects from the past. The event introduced people to history and familiarized them with the past in a tangible way. Talking with reenactors and handling objects creates a more emotional connection to history and archaeology, than reading or studying these subjects in a purely academic setting. Members of the public not only learn and appreciate the lifeways of people in earlier times, but also became familiar with how archaeologists piece together the fragments so that there is a better understanding of the way people lived.

Times and Epochs is a massive undertaking, with teams of staff and volunteers who organize the event, coordinate accommodation for participants, and work as interpreters for non-Russian speakers. The organiser and liaisons were instrumental in helping the EXARC team through the process of obtaining visas and arranging travel. We wish to thank Daria Isaeva, Ksenia Kozhina, and Ivan Semyan for their help in bringing EXARC and Times and Epochs together. 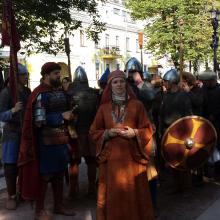 Fig 1. Medieval Muscovites made a… 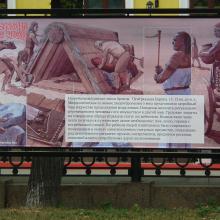 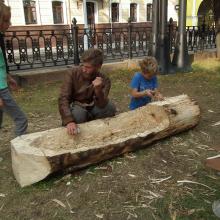 Fig 4. The mammoth and her calf was a… 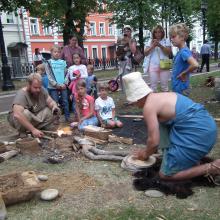 Fig 5. Casting bronze with a visiting… 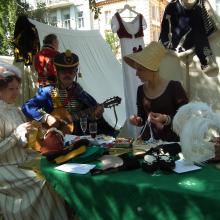 Fig 6. Relaxing with soldiers and…

Fig 7. Even in sleep, reenactors stay… 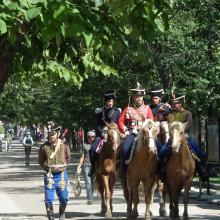 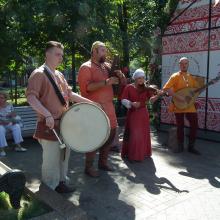 Fig 10. An encampment of Romany… 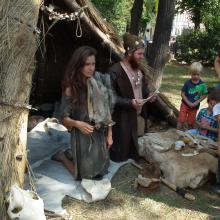 Fig 11. The Mesolithic house and a… 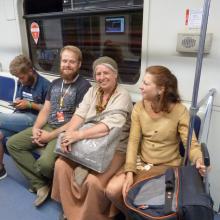