The third annual Bronze Casting Festival at the Bronzezeithof in Uelsen continued its theme of metalworking and experimental archaeology in a Bronze Age setting. The event drew participants from around Europe and the US to combine their knowledge and share experiences.

The Bronze Casting Festival began on 30 May and ran for four days, ending with an open day where visitors could see demonstrations of bronze casting and copper ore smelting. Participants used different types of furnaces and a variety of techniques to cast bronze, including sand and stone moulds.

This year’s event featured a series of copper smelting experiments organized by Kevin Frank and Giovanna Fregni, in which different techniques were tried. These included smelting carbonate copper ore (malachite) in clay balls, crucibles, and using a shaft furnace. In addition to learning about how the different smelting processes affected the amount of copper produced, the resulting samples produced will be analysed to see if the different smelting processes affected the trace elements that were part of the original ore.

Another experiment combined 21st century and Bronze Age technology in which Bronze Age pins were replicated using a 3D printer and then cast in bronze using a sand mould and a charcoal furnace. The bronze castings were so detailed that the original fine texture from the 3D printer was reproduced on the bronze replica.

The Bronzeithof is a recreated Bronze Age farm with a long house, a grain storage building and shelters for bread ovens and meat smokers. The adjacent field is home to Soay sheep and Dexter cows, both ancient breeds that would have been similar to those found in Bronze Age settlements. The farm has different activities for visitors, including grain-grinding stones, a hand powered drill for cutting holes in stone axes, weaving and plaiting activities. There is also a series of logs that support a large stone that visitors can pull along the field, giving them an idea of how heavy objects were transported in ancient times.

The Bronzeithof was based on findings from archaeological excavations in Riedberg from 2003 to 2005. The original long house was built by volunteers and opened in June 2005. Since then it has provided educational opportunities for schools and adult groups, and hosted public open days on Sundays and holidays. The farm is located outside of the city of Uelsen at Am Feriengebiet 7, 49843 Uelsen, Germany.

The festival is open to everyone interested in ancient bronze casting techniques. The festival is not limited to Bronze Age technology, and past festivals have included Viking and Roman experiments in furnace design and casting techniques. It is an ideal venue for experimental work, sharing ideas and exchanging information. A fourth annual Bronze Casting Festival is in the planning process. Announcements with details as to dates and how to participate will be available through EXARC, the Bronzeithof website, and the Experimental Historical Bronze Casting Facebook Group 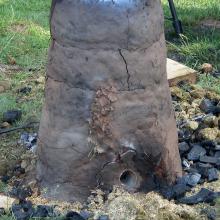 Fig 1. Copper smelting in a shaft… 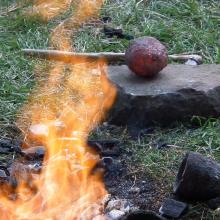 Fig 2. Copper smelting in a shaft…