In the Merovingian era (5th-8th century AD) a lot of variously shaped iron arrowheads were used by the Franks, Alemannians and Bavarians, who dwelled in the region known today as Germany, Austria and Switzerland (See Figure 1). As archaeological artefacts, two-winged arrowheads with rhombic, willow-leaf or triangular blades represent a standard Germanic type. Iron bodkin and needle-shaped tips are also found in Merovingian warrior graves, although they are less numerous. Finally, we have three-winged arrowheads. They belong to a type that seldom occurs in Central Europe. Such arrowheads were adopted by the Franks from Italy, that is the Byzantine Mediterranean area where this design, originally invented as bronze arrowheads by Scythian steppe nomads, was used since ancient Greek and Roman times. Other exceptional archaeological findings like transverse and trident-shaped arrowheads, or special forms that could have belonged to fire arrows, are also known from early medieval burial sites.

Obviously the design of Merovingian arrowheads was adapted for practical purposes like hunting or war. Narrow two-winged tips and bodkins probably were weapons of choice in ranged combat.

The average Merovingian arrowhead is between 7 to 11 cm long. It has a flat blade that is between 1 and 2.5 cm wide and 1-2 mm thick. The length of the cutting edges varies between 2 and 3 cm. In contrast, Merovingian arrowheads with barbs mostly have a significant larger width of 3-4 cm and cutting edges of 3-4 cm in length (See Figure 2). The front part of bodkin-arrowheads is approximately 4 cm long. The rectangular diameter tapers from a maximum of 3-4 mm towards the sharp point.

Each of these arrowhead types are fitted with a socket that has an opening of about 8-9 mm to integrate the shaft. Arrow shafts were made of ash, hazel or wayfaring tree wood. The shaft and socket were fixed with natural glue such as birch tar, and in some cases additionally with a thin wool or metal thread. Alternatively, the socket could be fixed with a little nail. Three winged tips usually have a 3-4 centimetre long thorn that was set into the shaft and secured with a thread made of textile or tendon fibre. The weight of the socketed tips differs between 10-12 grams for mid-sized forms, to over 20 grams for large broadheads. It should be mentioned that the sockets of Merovingian iron arrowheads are generally relatively long, compared for instance with many arrowheads with shorter sockets from late medieval English contexts. This contributes a lot to the weight of arrowheads.

Why was there such a variety of early medieval arrowheads? Was it a mere cultural phenomenon? Generally, archery in Merovingian society was either needed for hunting or for armed conflicts. So besides cultural preferences, arrowhead design could have had been optimized for one of these two main purposes. Additionally, there may have been arrowheads that were suited to a more universal use. In shooting tests with replicas, I tried to check the ballistics of different forms. The assumption was: tips that were highly efficient at piercing armour were used for combat, and those with low armour piercing efficiency might have been preferred for hunting.

The most frequent defensive weapon in early medieval Western Europe was the round shield. It was made of 6-12 mm thick boards of lime, alder or poplar wood and had diameters up to 90 cm. Constructed either with a flat or a convex shape, these round shields had their maximum thickness in the centre, where a shield-boss was placed to protect the grip that was integrated in an iron brace across the back. Until today, research could not determine whether Merovingian shields were always covered in leather or rawhide or if in some cases (as grave goods) they were left unprotected.

For the shooting tests we had prepared two flat 90 centimetre wide target-shields, made out of 9 mm thick limewood boards. One of them remained uncovered whilst the front of the other was covered with tanned cow leather with a thickness of 2.5mm. The leather was pulled over the periphery of the board and fixed there with small nails. Several layers of fish glue paste ensured a reliable adhesive connection between the limewood and the solid leather.

Before forging, we analysed the metallurgy of two Alemannic arrowheads from the 6th century. They were entrusted to us by the Landesmuseum Württemberg in Stuttgart. One rhombic shaped artefact had an interesting three-layer (sandwich) structure constructed of different sorts of steel (See Figure 3). The core part consisted of mostly ferritic iron with 180 HV1. On the outside there were two slightly harder layers of ferritic/perlitic iron with 190 HV1. A modern structural constitution like this made the arrowhead less susceptible to brittle fracture when hitting massive targets. The softer central layer was able to stop crack expansion while the harder outer layers stabilized the flat blade. One can assume that this elaborate arrowhead was produced with high technical expertise. Because of their similar material and hardness, we expected our tips to show an authentic performance in the tests (See Figure 4).

On the shooting ground a modern longbow made of fibre-reinforced cherry wood was used. The bow had a 72 pound draw weight and accelerated the arrows, which had shafts of pine wood, to a speed of 49 meters per second, measured 50 cm after arrow release. Depending on the design of the iron tips the arrows weighed between 40 and 48 grams. The shooting distance towards the shields was 15 meters.

The first batch of arrows was shot at the leather covered shield. The standard type arrowheads pierced 5-6 cm through, but the increasing diameter of the socket always prevented better penetration. For the same reason, bodkins with sockets showed no relevant higher efficiency than arrowheads with a narrow blade. The penetration of the two-winged tips oriented along the direction of the grain of wooden boards: eight of ten hits stuck more or less parallel with the grain. The more divergent the angle, the more penetration decreased. The wide broadheads had only 75% efficiency compared with the narrow tips.

Cleaving damaged the composite shield to a similar extent no matter what type of arrowhead hit (about 15 to 30 cm). The firmly glued leather covering however held the construction together relatively well (See Figure 5). The wooden shield with no leather cover broke in two halves when hit both by a bodkin and a massive barbed broadhead. The arrow shafts went 10-11 cm through. In a fight scenario, a round shield like this would probably have provided some protection from distance shots, but otherwise had minimal practical use. Further frontal hits by pointed arrows and subsequent blows by a sword or axe would cause the entire glued wooden structure to collapse, even if a massive shield-boss and a prolonged grip are firmly riveted on to the plates (See Figure 6).

Obviously the design of Merovingian arrowheads was adapted for practical purposes like hunting or war. Narrow two-winged tips and bodkins probably were weapons of choice in ranged combat (See Figure 7). Of all the arrowheads tested in the shooting experiments they showed the highest efficiency on the composite target-shield made of wood and leather. Remarkably the bodkins did not penetrate much further than arrowheads with narrow blades. Their true function should have been to pierce metal. Considering that expensive chain or lamellar armour could be afforded only by a wealthy minority in Merovingian society.

This  may explain why – when looking at the overall quantity of arrowhead finds as grave goods – bodkins were by far not as frequently used as two-winged tips. Broadheads with blades of more than 2.5 cm were primarily hunting weapons for shooting red deer, elk or aurochs. Later medieval written sources such as the well-known Le Livre de la Chass by Gaston Fébus, eleventh count of Foix in France, emphasize that wide arrowheads with barbs are ideal for hunting.

The tested penetration power of the three-winged arrowheads on the leather covered shield was disappointing. We know however, by looking at archaeological evidence, that it is sometimes a characteristic feature in rich Merovingian burials to combine two-winged and three-winged tips with bodkins. Our experimental experience suggests that this might indicate an alternative use of various arrowheads with different shapes, depending on their ballistic properties, for example whether massive or soft targets should be hit.

Finally, the results of the tests made clear that for combat-use Merovingian shields made of wooden boards (see for example the complete shields from Alemannic archaeological sites like Oberflacht and Trossingen in Southwestern Germany) should originally have had a covering either of tanned leather, rawhide or gut to provide sufficient protection in the field.

Fig 1. Arrowheads from the… 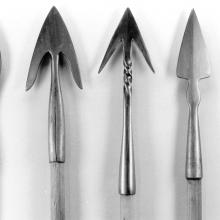 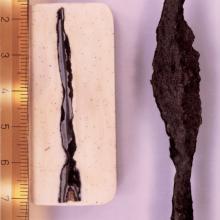 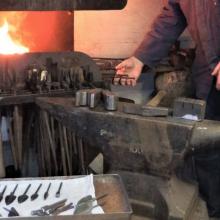 Fig 4. Manual forging of arrowheads for…

Fig 5. Numerous hits on the round… 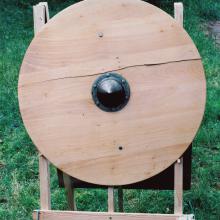 Fig 6. The uncovered shield with an… 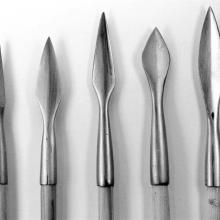