The oldest bifacial “handaxes” known so far belong to the “Kokiselei 4” site, dated to 1.76 Ma (West Turkana, Kenya; Texier, 2018). They have been manufactured by direct lithic percussion on magmatic effusive stone materials. Considering that the evolution of “fully operational intelligence” (Wynn, 1979) has been associated with the so-called “Mode 2” chaîne opératoire, it seems interesting to verify the potential adaptive meaning of selecting scarcely isotropic stones. This techno-behavioural approach, somehow similar to the so-called “lithic translation strategy” (Chelidonio, 1997), is a preliminary hypothesis that could be applied to the Fontana Ranuccio handaxes (458 ka BP, Latium/central Italy). In this very peculiar Acheulean assemblage, a few bifacial tools were manufactured using local “lava”1 (Biddittu, 1993, p. 58); others were roughly manufactured by flaking off thick elephant bones (Pereira et al., 2018). The above hypothesis has been preliminarily tested by experimenting the “Mode 2” techno-evolutionary step on some basalt samples at my disposal, to verify symmetrical flaking results applied to non-vitreous or non-cherty stones. Obviously, it is advisable to perform future tests on the basalt-like material available in the Fontana Ranuccio area, to adequately assess the techno-behavioural meaning of this peculiar lithic assemblage.

In the Latium region, Middle to Late Acheulean sites are rich in tools assemblages, including handaxes manufactured mainly out of siltstone pebbles or natural clasts (like at the Castel di Guido site, dated 310 ka BP ca. - MIS 9), but also flint, chert, and volcanic rocks.

When, more than 40 years ago, I started experimenting stone tools paleo-technologies, “flint knapping” was a widely accepted term, as if “flint” had been the main kind of stone used during the Lower Palaeolithic. In those years, French scholars (i.e. François Bordes) were my only reference; hence, vitreous rocks (very abundant in the Lessini Mountains where they outcrop from Maiolica, Oolite and even some Eocene formations) were the main raw materials I had experience with. But in 1982, while attending the II.PP. XXIV Congress in Florence, I was surprised to learn about some “lava” handaxes (Biddittu and Segre, 1984, p.106) found at the Fontana Ranuccio site (Anagni, Latium/Italy).

These symmetric (although thick) handaxes, found in a level K-Ar dated to 458 ka BP, have been processed, by direct percussion, on a peculiar kind of raw material I am not familiar with.

But, in the following twenty years, some others non-African Acheulean sites bearing basalt handaxes were published, such as those located in the Israeli Rift area:

Moreover, moving eastwards, another example is the Morgaon site (Pune District, India), where some cleavers and some elongated amygdaloid bifacial tools which were manufactured from large basalt flakes. These tools can be dated to an Early Middle Pleistocene age, maybe older than 600 ka BP (Gaillard et al., 2010).

The above-mentioned Kokiselei “KS4” site (Lepre et al., 2011) is, so far, the oldest lithic industry assemblage including “Mode 2” artefacts: pick-like tools, trihedral or quadrangular in section and unifacially or bifacially roughly shaped, knapped from large cobbles (or split cobbles) or tabular clasts of phonolite or basalt; these raw materials were all locally available. This assemblage highlights that blank selection was a peculiar step in the earliest Acheulean known so far.

Some other interesting considerations concern the Western European Acheulean (ranging mainly from 700 to 300 ka BP ca.) (García-Medrano et al., 2018) relations between hominins adaptive techno-strategies and handaxes morphologies, as well as their functions. This latter theme is still far from being solved, except for the Revadim site in Israel (dated 500-300 ka at least) (Zutovski and Barkai, 2016), in which a small cordate flint biface analysis “revealed edge damage and polishing related probably to hide scraping”, as well as “residue of fat tissues and bone, suggesting butchering activity or hide working” (Zutovski and Barkai, 2016, p.7). Moreover, this bifacial instrument has been “found in close association with elephant rib bone exhibiting cut marks”, thus suggesting the possibility that it was used in the processing of elephant carcasses (Palaeoloxodon antiquus), a dominant species in Revadim’s faunal assemblages (Solodenko et al., 2015). Noteworthy, too, is the presence of a couple of handaxes at the Revadim site (average length 87 mm; Zutovski and Barkai, 2016) manufactured with elephant bone, a bifacial tools “translation” in an assemblage rich in flint bifaces. This seems surprising enough to motivate a hypothesis: elephant bone handaxes could have been produced for an unknown “ritual” for butchering because these big animals were an important part in paleo-hunter-gatherers diet (Zutovski and Barkai, 2016).

Quite similar constraints exist in blocks or pebbles of quartzite, a hard and “splintery” raw material whose texture is often crossed by natural fracture planes. So, if artefacts’ morphology and functions did evolve in co-occurrence, the still-unsolved problem of 1.5 million years of “Acheulean/Mode 2” duration should be investigated in its complexity. This evolutionary step may have included adequate language, needed for cultural transmission connected to a progressive acquisition of “operational intelligence”, which beginnings could have been coeval with earliest stone blanks morphologies knapped in order to shape specific “volumetric” bifacial tools. (Wynn, 1985; Wynn and Gowlett, 2018).

The aforementioned site of Fontana Ranuccio (dated by K/Ar to 458±5.7 ka) has yielded a very diversified stone tool assemblage: five handaxes made of “lava” (See Figure 2) (Biddittu et al., 1979), one made of flint (See Figure 3) (Biddittu, 1993), a few bifacially flaked elephant bones, including an elongated and very pointed hand axe, associated with a large number of small tools manufactured from small flint pebbles (Santonja and Villa, 2006). A recent paper (Marinelli et al., 2018) presented these small flint tools as “a peculiarity of technology of Mode 2”: use-wear analysis “led to hypothesize the production of the small tools for specialized purposes, especially implying the cutting of soft material”, also adding that “handaxes seem unused, opening new questions about their role in the lithic industries of Mode 2.”

In the Latium region, Middle to Late Acheulean sites are rich in tools assemblages, including handaxes mainly manufactured out of siltstone pebbles or natural clasts (like at the Castel di Guido site, dated 310 ka BP ca. - MIS 9), but also flint, chert, and volcanic rocks (i.e. phonolithic leucitite?) (Boschian and Saccà, 2015). An old hypothesis of mine, in which I defined “lithic translation strategy” (Chelidonio, 1997), could be confirmed in these two Acheulean sites or even more widely applied. The variability of a complex human techno-adaptive strategy has been better defined (Boschian and Saccà, 2015) with the following concepts:

Moreover, in the Castel di Guido Acheulean assemblage these lithic strategies have been detected in the sense of recycling older instruments: a reddish patinated handaxe bears some fresh detachments, suggesting that an older tool was recovered somewhere; this implies some long-distance strategies (Boschian and Saccà, 2015, p.289, fig.2). Returning to the Fontana Ranuccio tools assemblage, it would be very interesting to detect the origins of the raw material of the only flint handaxe that was found (Biddittu, 1993): cordate-elongate type, triangular and pointed in its distal end with a symmetrical profile, it measures cm. 17.5 in length (width cm. 9.5, thickness cm. 4). Within Fontana Ranuccio bifacial tools, it is shorter than the famous elephant bone handaxe (length cm. 22.6, width cm. 10.2, thickness cm. 5) (Biddittu, 1993, pp.43-44). Furthermore, this flint biface preserves:

For all these reasons, it seems a “long duration” instrument, carefully resharpened if not somehow reshaped. Another elephant bone bifacial, from Castel di Guido site, looks quite similar: very elongated in shape and pointy (length cm. 18.7, width cm. 8.2, thickness cm. 5.6) (Walker, 1999). It was bifacially flaked on both sides of its distal part, while the proximal part was roughly shaped.

The other kind of “translated” bifacial tools (in Latium) were shaped in “lava rock”, not a strange raw material since the Anagni basin stratigraphy includes volcanic products dating from 528 ka to 487 ka BP ca. (Istituto Italiano di Paleontologia Umana).

As far as I know, by consulting the bibliography available on online reported below, five “lava” bifacially flaked handaxes (Biddittu,1993) have been found at the Fontana Ranuccio site. As described (Biddittu et al., 1979, p.57; Biddittu,1993, p.40), within these tools fairly low symmetries prevail and a relevant part of the cortex is preserved, although some scars are wide. Mean measures are: length cm. 12.52; width cm. 8.14; thickness cm. 4.64. Two of these lava tools show a repeated centripetal orientation of direct percussions, allowing to distinguish in the middle morphology:

These details pertain particularly to the centre of the biconvex shape (i.e. in the maximum thickness of the biface), but some other scars, situated in the biface distal end, look oriented similarly to the so-called “tranchet blow” technology. Moreover, the position of these scars clearly corresponds to a thinning part of the distal section, thus confirming a lanceolate option despite the coarse aspect of two out of five of these bifaces. In other words, their apparent “Lower Acheulean” rough aspect was likely due to the different results of the same flaking technology applied to volcanic rock instead of flinty raw material, a choice that recalls some former questions:

To sum up, the morphologies of these handaxes depended not only on those hominins’ traditional flaking technology and/or from the availability of diversified raw material but also on their environmental constraints and strategies. In this regard, it seems interesting to cite the Bilzingsleben site (Thuringia/Germany): dated to 412-320 ka BP (Walker, 1999), it has been interpreted as a “campsite” where a single bone bifacial tool (described as “hand axe-like scraper” and measuring cm. 19 x 10 x 4 approximately) (Walker, 1999) was found within a lithic assemblage characterized by small flint flakes and retouched quartzite pebbles (Bosinski, 1996).

Given that the above observations were only made on the drawings of Fontana Ranuccio handaxes available so far (Biddittu et al., 1979; Biddittu and Segre, 1984; Biddittu, 1993), only a few preliminary tests have been made on some basalt slabs sampled from various non-Latium outcrops, using direct percussion, both with stone hammers (metamorphic pebbles) and “soft hammer” (a “bar hammer” made from deer antler). Blanks were selected on their morphologies and allowed the following observations:

Although the cortex-bearing flakes predominate, 30%, at least, of these waste flakes possess sharp cutting edges, suggesting that handaxes manufactured with a somehow “vitreous” quality of basalt could be potentially considered as “biface used (also) as a blank for tools”.

Although it is obvious that further experiments should be planned on the specific kind of “lava” that was used at the Fontana Ranuccio Acheulean site (leucitite cobblestone?), the multi-material strategy documented there seems significantly representative of the so-called “lithic translation hypothesis”. Elephant bone knapping, performed to obtain handaxe-like tools but also some flake instruments, is surely the most peculiar characteristic. Selecting “lava” slabs “vitreous” enough to perform bifacial flaking also seems to have been an important adaptive choice. Many more details should be verified, such as the presence of “lava” flake tools (Biddittu et al., 1979, p.56) if derived, or not, from handaxes’ knapping chaîne opératoire, also in order to better define the original locations of their raw materials outcrops and workshop areas.

In a general sense, the waste flakes used as expedient cutting tools seem to have been an important adaptive choice within the morpho-technological evolution of “Mode 2”, which seems to have been often adaptive to each kind of environmental lithic resources.

In conclusion, all these observations suggest that Fontana Ranuccio tools assemblage seems to be highly representative of Acheulean techno-adaptive strategies. These assemblages also allow us to hypothesise their potential meaning as an example of handaxes traditions resilience, which may have been rooted in some neighbouring regions where vitreous flint outcrops were abundant and which, therefore, could have acted as “techno-evolutionary laboratories”, also preserving and passing down within generations the main Acheulean bifacial tools’ traditions.

Texier, P.J., 2018. Technological Assets for the Emergence of the Acheulean? Reflections on the Kokiselei 4 Lithic Assemblage and Its Place in the Archaeological Context of West Turkana, Kenya. In: R. Gallotti and M. Mussi, 2018. The Emergence of the Acheulean in East Africa and Beyond. Contributions in Honour of Jean Chavaillon. Springer Intl. Publishing. pp. 33-52.

Walker, S.J., 1999. Palaeolithic Bone Handaxes. On the evidence for the knapping of bone artefacts by pre-modern hominids and the implications for hominid behavioural and cognitive evolution, The University of Reading, Department of Archaeology (UK). 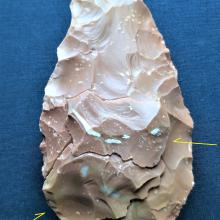 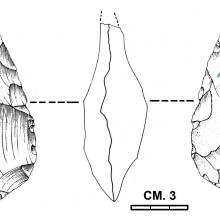 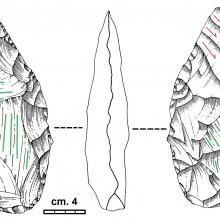