Mining at Pozarrate: Applying Experimental Approaches to Understand the Neolithic Extraction of Flint in the Sierra de Araico (Treviño, Spain)

The aim of this paper is to introduce the scientific works performed in the Sierra de Araico Neolithic Mining Complex, mainly located in the Treviño enclave of Spain, in the Basque-Cantabrian Basin, between Burgos and Álava provinces. Archaeological works were focused on the Pozarrate quarry, dated to the Neolithic period (6000-5600 BP). This site is unique since it has been used recently to intensively dig out high-quality flint cores. This type of flint, called Treviño, has had wide circulation in archaeological sites of the Cantabrian Mountains and Western Pyrenees. The interdisciplinary research applied to Pozarrate site involves LiDAR analysis and geological, procurement, typological, technological and functional research related to flint blanks and different mining tools manufactured on the local flint. The research also includes the study of other raw materials, such as dolerite hammer stones and antler picks. Different experiments, related to the comprehension of mining processes, have been carried out in order to clarify the archaeological findings of the site. Particularly, we present the results of an experiment on flint changes produced by contact with fire and an experiment on the replication, utility and use-life of hammer stones used to dig out the flint cores.

The main aim of this experiment was the replication and use of hafted dolerite hammer stones, in order to understand the archaeological dolerite sets: both the surface finds around Sierra de Araico-Cucho and the archaeological finds recovered at Pozarrate. Unlike the surface collection, the Pozarrate dolerite set shows simple technological modifications to adapt lithic blanks to hafting and mining work.

Sierra de Araico is one of the only two prehistoric flint mining complex in the Iberian Peninsula that have provided dates associated to the Neolithic period. Pozarrate archaeological quarry has eight structures classified as crescent-shaped dumps. The archaeological excavation focused on the inferior dump. The two dates were obtained from an antler (5640±30 BP uncalibrated) and from a charcoal (6050±40 BP uncalibrated) (Tarriño et al., 2011a, p.25). During excavation, thousands of artefacts made in Treviño flint have been collected, including several mining tools such as antler picks and dolerite hammer stones.

Estavillo Villambrosa (1975) described around 50 surface finds of dolerite-quarry-hammers in the Sierra de Araico-Cucho, that are similar to the archaeological material subsequently discovered, and were taken as an indicator of intense mining activities. After a preliminary analysis, some of these items were reclassified as loom-weights or undefined objects, leaving the total of 30 surface finds of hammer stones (Tarriño et al., 2011b, p.176). This is the point of departure for the whole mining complex research.

Since 2011, different works at Sierra de Araico were developed to understand and delimit the mining area. The principal raw material is Treviño flint. It’s a frequent type of flint usually detected in many archaeological sites of the Cantabrian region (from Asturias to the Basque Country, Spain), the Western Pyrenees and the south of Aquitanian Basin (France), from the upper Pleistocene to the Holocene.

An experiment on Treviño Flint changes by thermal stress

This experiment was done due to the considered hypothesis of a “fire-setting” procedure to weaken limestone rocks where Treviño flint cores are included, as seen in some quarry front excavated areas of Pozarrate. Thus, our main aim was evaluating flint damage caused by thermal stress that was created by this extraction method, both by direct contact with fire and indirect heat, over varying time scales.

We were able to take advantage of an ethnographic experiment on Basque traditional coal production performed on June 2018 during a week in Bernedo, Álava (Basque Country, Spain). Despite not being an experiment focused on our goals, we believe that the conditions of time and temperature would be similar to those used in the extraction of flint nodules from Pozarrate. Due to the long duration of the experimental process, the temperature of several areas of the charcoal pile was checked with a laser thermometer at intervals. Therefore, several Treviño and similar Botorrita flint flakes (n=21) were placed on the surface at an initial stage of the experiment and recovered by archaeological methodology after the charcoal pile was dismantled (n=13).

An experiment on the replication, utility and use-life of dolerite hammer stones to dig out the flint cores

The main aim of this experiment was the replication and use of hafted dolerite hammer stones, in order to understand the archaeological dolerite sets: both the surface finds around Sierra de Araico-Cucho and the archaeological finds recovered at Pozarrate. Unlike the surface collection (with evidence of standardization and much more polishing features), the Pozarrate dolerite set shows simple technological modifications (generally notches) to adapt lithic blanks to hafting and mining work. The morphotechnic similarities of other prehistoric and metalliferous mining environments (e.g. Blas Cortina, 2007-2008; Delgado Raack et al., 2014) make us think that these surface maces may belong to a post-Neolithic period. Therefore, we chose to reproduce the archaeological set, taking into account its weight and technological improvements, and designed different mining tools accordingly with three extractive strategies: a rigging device, a single-end hammer of medium weight and a double-end hammer of light weight (Blas Cortina, 2007; Timberlake and Craddock, 2013 p. 44-45).

The designed experiment was focused on logically reproducing all phases of hammer stones production:

Table 1. Dolerite materials used during the experiment. EP2 and EP4 were discarded due to internal fractures during knapping.

The experiment was carried out during the first quarter of 2019, involving 12 people. The comprehensive technological management of dolerites and their hafting took seven hours. The field experiment took two hours. The successful use of experimental hammer stones allows us to affirm that the mechanical extraction of flint is possible, and the use-wear generated will be used for their comparison with those from the archaeological samples, in order to determine their use and function.

Two experiments, related to the comprehension of mining processes at the Pozarrate site, have been carried out in order to interpret its archaeological findings from a functional perspective. On one hand, the experiment related to flint changes due to heating show that only the direct contact with fire produced typical evidences of thermal stress (dome-like fractures, edge damage, micro-abrasions...). However, pieces with a non-direct heating did not show any visible taphonomic feature (mainly colour changes), even after a long period of time. Thus, a “fire-setting” mining strategy is feasible, since it is possible to avoid thermal stress on flint cores by non-direct heating. On the other hand, the experiment based on the replication and use of dolerite hammer stone for quarrying allow us to confirm (1) the difficulty of technological management of this sort of very hard lithic raw material; and (2) the efficacy of the three hafting methods on mining activities, in order to conduct some technical gestures, such as hitting limestones directly or by levering-off with an intermediate antler pick.

The next step in our research will be to do new research to establish a reference collection that includes a catalogue of prehistoric mining activities. This experimental collection will enable us to compare it with the archaeological record and also allow the development of a functional analysis of tools from Pozarrate.

This work was developed within the frame of the Spanish Science Ministry research project HAR2015-67429-P (El complejo minero prehistórico de sílex de Araico-Cucho, Cuenca Vasco-Cantábrica. Los sílex, sus labores extractivas y su difusión en el Pleistoceno Superior y Holoceno) and is part of the work of the Research Team in Prehistory of the University of the Basque Country (UPV/EHU) (IT-622-13). H. H. Hernández and C. López-Tascón benefits from a postgraduate grant from the University of the Basque County (UPV/EHU) and from the Principado de Asturias Government. We are very grateful to the researchers of the Basque Government project Pasado y presente del paisaje cultural de montaña de la CAPV: desarrollo metodológico para el estudio arqueológico y puesta en valor de los espacios de bosque y pasto, especially to the charcoal pile experiment team (P. Zapatería, F. Gómez-Díez, A. González-García, P. Rodríguez-Simón, C. Ibáñez, A. Richaud, C. Camarero) for allowing us to participate in experimenting with our own aims, as well as A. Alday, A. Abaunza and the students of Archaeological Method in Prehistory of the History Degree, University of the Basque Country (U. Alonso, L. Álvarez, M. Campo, V. de Azevedo, F. B. Garay, P. Guiral, Y. Manzanares, J. Marco, K. Martínez, I. Olczak, Y. Vitoria) for their help during experiment sessions. We would also like to thank the work of the reviewers of this article, as well as A. Masclans for their help with technological issues. 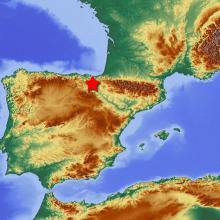 Fig 1a. Location of Pozarrate… 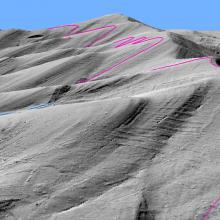 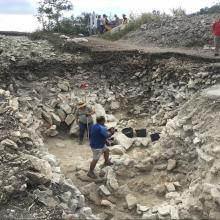 Fig 2a. Archaeological dolerites from… 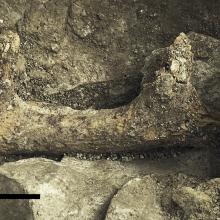 Fig 2b. Archaeological antler from… 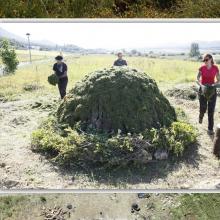 Fig 3a. Phases of the experiment:… 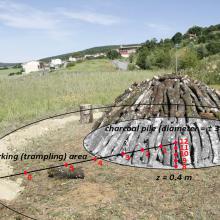 Fig 3b. General dimensions of the…

Fig 3c. Surface temperatures on the… 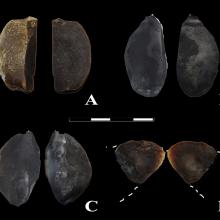 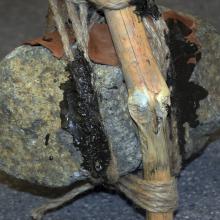 Fig 6b. Use of EP5 with an intermediate… 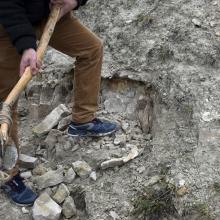 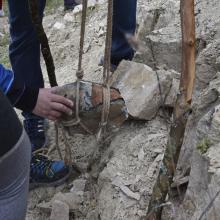 The Variation of Elastic Modulus and Changes of Structures and Mineral Phases in Rocks as Parameters for the Identification of Fire-Setting in Ancient Mines
Results of a Discussion on the State of Experimental Archaeology in Switzerland
Book Review: The Emergence of Pressure Blade Making: from Origin to Modern Experimentation by Pierre M. Desrosiers (editor)
Conference Review: 8th Spanish Experimental Archaeology Workshop
Knapping Skill Assessment