Techno-functional Study of the Personal Ornaments in Lignite of the Boira Fusca Cave (Cuorgnè, Torino-Italy)

This paper aims to present a techno-functional study of lignite ornamental objects found during the Fedele excavations (1977-1980) in the Boira Fusca Cave (Cuorgnè, Salto-Turin, Italy). The site demonstrates a chrono-cultural sequence which extends from the late Palaeolithic to the Modern era. Particularly during the first phases of the Metal Ages (Chalcolithic to Early Bronze Age- c. 3400-1600 BC) the cave was a burial site, similar to others in the Alpine area. The technological study of manufacturing methods, based on a wide experimental base, and conducted with the aid of digital microscopy is focused on drilling and shaping techniques. This method is a very valid approach to identify cultural peculiarities comparable with other contemporary contexts. The bead assemblage kept in the Museo Archeologico del Canavese (Cuorgnè, Turin) was analysed to see if it shows any technological and/or use wear indicators. Among the most remarkable aspects are the presence of beads of small dimension. Between the Neolithic and the Early Bronze Age, the beads with micro-perforations are quite numerous (normally on microlithic supports less than 3 mm in diameter), but there are no clear hypotheses on the techniques and instruments used during the drilling and manufacture activity.

The lignite beads of the Boira Fusca bear no use wear or very little wear. The interpretation is based on the fact that the modifications of the outline of the holes (slightly oval) seem to be the result of technological and not "functional" procedures.

Introduction and the archaeological context

Our work is part of a research project on stone microbeads, dated from the Copper to Early Bronze Age (Approx. 3400-1550 BC), coming from northern Italy and the Alpine area (the University of Milano is the leading institution in the Microbeads project: https://sites.unimi.it/preclab/progetti/microbeads/). The objective of our work was to conduct a techno-functional study on the ornamental objects in lignite of the Boira Fusca Cave (Cuorgnè,Turin-Italy) (See Figure 1). The Cave belongs to rocky spur in gneissic rocks that are strongly fissured on the left side of the Orco river valley (altitude 510 m) (Fedele, 1990, p. 8).

The site was investigated in the late 1970’s (Fedele excavations, 1977-1980) and consists of a chrono-cultural sequence that starts from the late Palaeolithic, and reaching into Modern era (Fedele, 1981, pp. 60-93). Particularly during the Chalcolithic and Early Bronze Ages the cave was used for a collective burial rite which was practiced widely in the alpine area at the time. (Fedele, 1981, pp. 73-81).

The precise dating of the finds is not clear because they come from altered and disturbed layers, however the funerary function dates back to the Chalcolithic period (mostly during the Bell Beaker phase) and may have continued until the Early Bronze Age (Fedele, 2013, p. 59). In this paper we correct what we suggested in a previous publication on the chronology of findings, (Viola, et al., 2019, p.83). The analytical method, developed during the doctoral thesis of one of the authors (SV), aims to apply an effective procedure in loco according to three integrated approaches (technological, ethnoarchaeological, experimental), with portable instrumentation (optical and digital microscopy) being very useful in the study of archaeological objects with high administrative limitations (Viola, et al., 2017, pp. 70-71).

All the beads were examined with a microscopic approach. Firstly, examinations of all marks on the surfaces with a Binocular Stereo microscope and digital USB microscope were carried out. Subsequently, data from technological, ethnoarchaeological and experimental archaeology literature were compared to the results from observations on archaeological objects (interdisciplinary analogical approach).

The set of beads of the Boira Fusca cave is relevant to the raw material from which they were made: a form of lignite (Fedele, 1981, p.79). The term lignite covers a vast set of materials derived from fossil plants (lignite, jet, cannel coal, oil shale, et cetera) (Dietrich, 1988, p.72). In our case it seems to be a bituminous and compact substance, of an intense black colour, slightly opaque, finely textured, and strongly stratified with white inclusions (quartz?), also featuring a slightly conchoidal fracture and shiny (visual autoptical determination).  Furthermore, the beads have some characteristics deriving from degradation: cracking along the rolling lines, loss of superficial splinters (nos. 5, 23, 24 in Figure 1). All these aspects indicate a form of lignite other than high quality jet possibly of a lower standard, or a substance similar to Cannel coal.

The technological study of manufacturing methods is focused on drilling and shaping techniques. The shape of the beads shows a regular outline, flat and parallel faces (n. 22, face with a step, coaxial to the hole), straight edges and slightly rounded margins. Moreover, their diameters and thickness are fairly standardized (approximately 4.4 mm, 1.7 mm).  The perforations are slightly oval or circular (n. 22) and the outlines of the holes have a rounded margin (nos. 5-6). Furthermore, they are centred, cylindrical, smooth, small sized (only in one case below 2 mm in diameter, n. 5), perpendicular to the rectangular cross-section of the bead, and standardized (average diameter 2.5 mm). The sidewalls show only thin lines inside the hole that do not correspond to technological indicators but are the internal laminations of the raw material. In some cases, the hole is perfectly cylindrical and shiny inside (nos. 5-6) (See Figure 2).

Although typologically the objects belong to the small size beads (average diameter of 4.4 mm), from a technological point of view, they show the same manufacturing problems found in the microlithic sequences, i.e,difficulty of locking and handling during the drilling, calibration and finishing phases.

The lignite beads of the Boira Fusca bear no use wear or very little wear. The interpretation is based on the fact that the modifications of the outline of the holes (slightly oval) seem to be the result of technological and not "functional" procedures. In particular, the cone of the perforations does not appear ovalised in the lower part (for example by rubbing); volumes and surfaces show no localized polishing or colouring. Moreover, the surfaces do not show detachment of portions of matter due to impacts, only some typical micro-craters of the raw material. At the microscopic level the striae and grooves found are compatible with technological wear.

During the Chalcolithic and Early Bronze Ages, ligniteornamental objects are very scarce on the southern slope regions of the Alps, with only one circular pendant belonging to the period from the grave of La Vela Valbusa - Trento (Angelini, et al., 2003). Within the Italian Chalcolithic and Early Bronze Ages the small dimensions of the lignite beads are another intriguing aspect (Viola, 2015-2016, pp. 40-41).

Techno-functional studies of beads, based on a wide experimental base, are still scarce in Italian archaeological literature although are a pertinent approach to identifying cultural peculiarities comparable with other contemporary contexts (Kenoyer, 2017, pp.151-154). In our case, the regularity of the outline and of general shape of the beads (for example: high value of Index Fc – average circularity ratio - equal to 0.047) suggest that they were most likely made by a rotational method to produce a rod/cylinder, in accord with what is documented in the ethnographic, archaeological and experimental field (Viola, 2015-2016, pp. 102, 197-199).

The virtual re-fitting of 4 beads (nos. 23, 24, 21 and 22) arrayed according to some morphometric characters (beads diameters and thicknesses, perforation diameters) can suggest some relevant technological issues (See Figure 3). In fact, the tip was likely one of axial type and the roughout seems to belong to a typology named "cigar-shaped” bar at least 7 mm. long and 5.5 mm. thick approximately, cut off every 1.8 mm. This last aspect introduces to us that the main stage of production involves subdivision and drilling techniques alternating in a method whereby the rod/cylinder could be partially perforated with individual beads cut off in a series of stages. All these techniques and methods are well attested in the archaeological record of prehistoric Europe (for example: slicing with fil sablée or drilling activity with lithic or metal axial tips) and suitable for the processing of small and fragile elements (Viola, et al., 2019, p. 85).

The final production stages are more difficult to recognize, calibration has likely been done by threading the beads on to a rod/wire, then ground in an abrasive stone (for example: for French region Barge, 1982, p. 76; for north Italian region Barfield, 2007, p.307). Production in series tends not to require a real reaming, though a small adjustment could be useful to correct any fractures, cracks or other inaccuracies. However, a real reaming seems difficult and risky due to the small size and fragility of the beads.

The beads do not show wear of the bead-on-bead type (Guzzo Falci, et al. 2019, Table 1), only technological wear due to rubbing of a string which has smoothed the edge of the hole and produced this regular shape. So, if the interpretation is correct, this cylindrical shape is the result of a technical action (calibration in series) and not from reaming (for a British example, see Woodward and Hunter, 2015, pp.275-277). The surface appearance of some beads (nos. 5, 6, 21) illustrate the effect produced by the combined use of a damp skin and lignite powder, in accord with what is reported in some British archaeological contexts for the finishing phase (Sheridan, et al., 2002, p.823).

In this phase of our knowledge it is not possible to exclude the use of a spinning device for shaping and/or cutting at least one bead (notably beads n. 22). Further analytical investigations are ongoing. 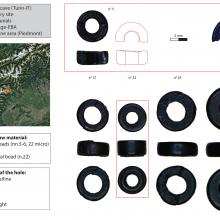 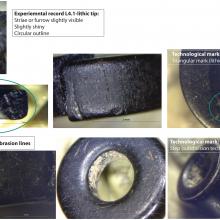 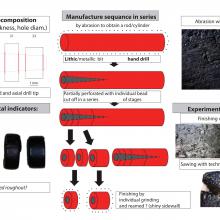