A few years ago, I conducted a series of experiments focusing on wax tablets as drawing tools in antiquity (Vlavogilakis, in press. All references to my earlier experiments with wax tablets refer to this paper). When this was over, I decided to create a diptych as a present. The method of making was inspired from examples of tablets and diptychs from different periods: Bronze Age, 8th century BC and 10th-11th century AD.

The process of making a wax tablet is simple and relatively easy.

The following is intended as a short guide for making a wax tablet using a small number of hand tools. The tablet was constructed for actual use. Sending the tablet through the post influenced the size and weight of the diptych. The dimensions of each leaf are 13.6 × 11 × 2 cm, the border between the edge and the niche centre is 1.4-1.5 cm. The size of each niche is 10.6 × 7 cm, cut 6.5 mm deep. To create the diptych, I used the following hand tools (See Figure 1):

A board of Swedish pine wood was chosen for ease of hand carving and its low weight in comparison with other types of wood. I chose a 2 cm thick plank so the diptych would not be damaged during transport. Normally a tablet or a leaf of a polyptych would not need to be that thick.

I cut the plank in two and then sanded the pieces to create a smooth surface. With the exception of the niche, all of the corners were carved and sanded to make them round. The first rough sanding of the corners was done in the initial stages so that a) I could hold it more easily while carving and b) I would not cut my fingers on the corners. I did not carve the niche using a router-type method, a practice attested in the Ulu Burun tablet (c. 1300 BC; see:  Pulak, 1988; Bass, et al., 1989; Payton, 1991; Symington, 1991, p.112; Warnock and Pendleton, 1991; Symington, 1999; Fawcett and Zietsman, 2001). I carved the wood using only hand tools, which took some effort. I intended to give the tablet in a few months’ time, so I could take my time making it. Both pieces of wood had large knots that were left there to give it a more natural look (See Figure 2). The parts of the wood that were closer to them were harder to carve and required more time to work. The niche was cut 6.5 mm deep, and the layer of wax was 5.5-6 mm thick. I wanted to make sure that a) the wax did not reach the surface of the leaves and b) that there was sufficient unobstructed grip when in use. If the wax reached the top it would be rubbed and pressed when held. The surface of each niche was sanded using thick sand paper in order to clean it without reducing its rough texture. When this step was finished it was scored using the marking knife in a crossing pattern based on those found on the Ulu Burun, Nimrud (c. end of 8th Century BC; see: Mallowan, 1954, p.98; Howard, 1955; Wiseman, 1955; Bass, et al., 1989, p.10) and Novgorod (c. end of 10th - beginning of 11th Century AD; see: Yanin 1990; Zaliznyak and Yanin, 2001; Butrin 2015) tablets.

Hinge mechanisms were used in the Ulu Burun and the Nimrud tablets (Howard, 1955, pp.14 fig.1, 17 fig. 8-10, 18 fig. 11, 19-20; Payton, 1991, pp.99-103, fig. XVII, fig. XVIII; Bass, et al., 1989, pp.10, 25; Fawcett and Zietsman, 2001, p.11). For this project I used a metal hinge that requires 3 screws in order to give it more stability (See Figure 3). The yellow zinc-plated hinge and screws were selected to reduce rusting in the future. The niche for the hinge was carved by hand. To make sure that both hinges were in the correct position I tied the two leaves together, placed the hinge in position and marked its place with a pencil. The position of the hinge was then marked using a marking knife and the position of the holes for the screws with the bradawl. In the placement of the hinge, I took into account the size and shape of its moving parts, and calculated the depth I would need to dig the holes. The niche was cut to a depth of 3 mm, enough to allow the hinge to rest securely and to allow the diptych to open unobstructed. To bore holes for the screws, I used the point of a marking knife to carve a cross in the centre of each position. I could not use the screw hole starter because it produced a hole that was wider that the screws I intended to use. I initially punctured the surface with the bradawl, and then used a screw to bore the holes. That screw was smaller and thinner than the ones I intended to use in the hinge.

In order to keep the diptych closed when not in use, I decided to use a leather strap (1.5 mm thick). The strap was cut into two, 15 cm long sections, one for each leaf. I made a hole on the side of each leaf for the strap to pass through (See Figure 2). The diameter of the holes was 1.8 mm, just wide enough for the strap to pass through each. The holes were wider on the opening than the side of the niche because I needed to place the knot of the strap there. To open the holes for the strap, I first carved the two entrances with the V gouge and then used the screw hole starter. The holes were drilled vertically on the outside and diagonally on the inside. The exterior openings were sanded.

The stylus was created by carving the handle from an old paint brush (See Figure 5). The length of the stylus is 13.1 cm, as it needed to be similar to that of the tablet. The stylus is small but its size is similar to that of styli used in modern capacitive screens. Before making the stylus I had to choose the shape for the easer. From the different shapes that have been used in the past (spatula, fan, square, spherical; see: Clarke, Breeze and Mackay, 1980, p.51; Payton, 1991, p.101; Symington, 1991, p.114; Brown, 1994, p.4; Kligour, 1998, p.51; Humphrey, 2006, p.92), I selected the spatula shape as more practical for this tablet. The nose of the stylus was made into a blunt point. It was found in earlier experiments that a curved point was more practical to use. If the stylus is too sharp it cuts into the layer of wax instead of incising the surface. In the finished tablet, the knot that ties the diptych doubles as a sheath for the stylus.

When both the tablets and the stylus were complete and sanded, I proceeded to varnish them. I used a yacht varnish that was applied diluted with white spirit in three layers. The first two layers were left to dry and then sanded with thin sandpaper before applying the next. The final layer was left to dry. In retrospect I should have sanded that layer as well, to give the diptych’s surfaces a more natural look. The wood was varnished with the exception of the niche, as varnishing there would inhibit the wax from sticking to the wood. The stylus was varnished at the same time as the tablet and was only coated with two layers. After drying both layers were sanded. Both the stylus and the leaves of the tablet were left for two weeks, during which the smell of the varnish dissipated.

The diptych was assembled and then the straps were applied. After each strap passed through the hole its end was tied. Using the bradawl, I pushed the knot inside the hole in each leaf and secured it in position. This decision was determined because a) I wanted to plug the holes so that the wax would not pour out of the holes, and b) I did not want the knots to interfere with the wax. After completing this step, I poured the wax.

I used a plaque of cleaned natural beeswax obtained from a candle making shop. To measure the amount of wax needed for the diptych, I cut slices and placed them in the niche. The amount of wax used was equivalent to the size of the niche. For this measurement, I included an additional measurement of wax to account for the fact that a portion of the molten wax would be absorbed by the wood. Wax needs to be molten, but not to the point of boiling. Wax melts at 64°C but the melting starts beginning at approximately 40°C (Gettens and Stout, 1966, pp.5-6, 79; Buchwald, Breed and Greenberg, 2008, pp.121, 123 table 1, 124 table 2). Wax is easier to handle when it is heated slowly and kept warm in very low fire, if needed. Instead of using direct flame, it is possible to melt wax and keep it warm using a bain marie technique - a double container with water between the two pots. As a method it is slower but safer, and the gradual heating is easier to control.

In my earlier experiments, I had coloured the wax using different pigments including carbon black, yellow and red ochre. For this tablet, I decided to leave the wax uncoloured so that it could be melted easily and reset by its owner if needed (See Figure 4). The pigment used for the wax is added before pouring, when the wax is completely fluid. In the case of pigments that change hue with heat, such as yellow ochre, it is best to add them at the last minute to reduce the time they are exposed to heat. The wax for the diptych was slowly heated. When ready, I poured it carefully on one leaf, waited for it to cool down for an hour and then repeated the process on the other leaf. Both pouring the wax and the drying of the wax require placing the tablet on a stable horizontal flat surface. In this way the surface of the wax is flat, and the wax is evenly distributed in the niche. A few days after the diptych was finished I packed it and sent it by mail.

The process of making a wax tablet is simple and relatively easy. Using a router –or even the ancient method of using a drill as a router- to create the niche for the wax significantly reduces the time needed to make the tablet or diptych. Even with a router, there is little need for specialized tools. My experience with carpentry or woodworking methods and techniques is limited. An experienced carpenter or even a seasoned wood carver could make this tablet with less effort and /or equipment. Single, diptych or polyptych tablets can have a place in the gift shop of an AOAM, or as a small woodworking project for an experimental archaeology class. 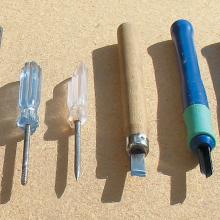 Fig 1. The hand tools used to make the… 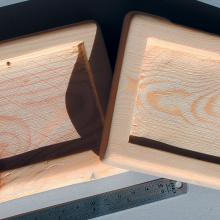 Fig 2. The leaves of the diptych before… 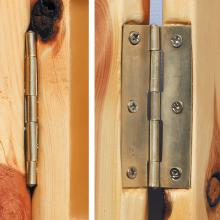 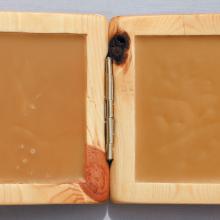 Fig 4. The finished diptych. Photo by… 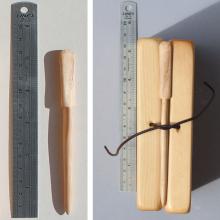 The Experimental Reconstruction in Bronze of a Merovingian Treasure Box from Sixth Century A.D.
Anatomy of Prehispanic Bells - Study of an Ancient Lost Process
The Use of Metal Moulds to Cast Lead Weights onto the Wooden Shaft of a Plumbata
Prehistoric Dressing for Third Millennium Visitors. The Reconstruction of Clothing for an Exhibition in the Liptov Museum in Ruzomberok (Slovakia)
From the Object to the Mould: Is there a Connection between Microstructure of a Cast Bronze Object and its Mould Material Used?