Warrior Training in Sagnlandet Lejre – An Exercise in Community, Camaraderie and Cooperation

Sagnlandet Lejre is a Knowledge Pedagogical Activity Centre that explores, disseminates and preserves knowledge and trades on traditional historical and prehistoric crafts and living. Since 1964, as the Historical Archaeological Dissemination and Research Centre, Sagnlandet Leire has been a Historical Workshop that makes abstract knowledge concrete, and makes the complex, simple. The mission of the Sagnlandet Lejre is to create and disseminate knowledge and wonder about the way of life of the past through experimental archaeological research, revival and teaching based on active participation.
Sagnlandet Lejre, 9 km west of Roskilde, encompasses 43 hectares of protected moraine landscape both contrasting and scenic, with forest, lakes, bogs, meadows and commons. Sagnlandet contains recreated historical environments with cottages, houses, gardens, fields, shrines and cult sites from the Stone Age, the Iron Age, the Viking Age and the 19th century. The historical environments are brought to life by actors and teaching staff dressed in contemporary suits involving guests of all kinds in hands-on activities and tales of past life and way of life. Sagnlandet Lejre’s School Services, Dissemination and Public Relations Department collaborates to bridge research-based knowledge and citizens to increase and stimulate the public's interest and knowledge of history and nature. It is done through educational, community-enhancing and exciting activities. Sagnlandet Lejre is a self-employed economic fund, approved as a non-profit institution.

They are parents and children, grandparents and grandchildren, school clubs and their teachers. Everyone is brought together with awareness of the common goal, a shared experience where there is a clear framework and expectations for the individual.

Being able to combine and bring to life academic knowledge from historical and archaeological sources, experimental archaeology and an entertaining involvement of the audience was one of the main goals, and hopefully achieved by the Vikings at Sagnlandet Lejre. That it also has become a formation project that moves the visiting guests in time and space to another time-pocket. The reenactors ensure that through their outfits and roles they create a window which provides insight and an outlook on the Vikings’ warrior life.

The warrior training of Sagnlandet Lejre is doing something special. Over the past 10 years, the Vikings of Sagnlandet have developed an inclusive teaching method combined with the subject. This teaching practice is working in correlation to the other immersion methods employed by Sagnlandet. It is well tested and continuously updated. The Viking environment and reenactors are in period correct outfits and work as live interpreters in the role of Vikings, making warrior training in different versions, tailored in accordance with the user group with which they work. It can be used as education for schools and day-long visits, as teambuilding and, during the autumn holidays, as the children’s battle, which is an event that will keep up to 300 guests “captured” in 2-3 hours twice a day. This article will focus on the children’s battle.

Those included in our events as voluntary Vikings are old and young, large and small, beginners and experienced, strangers and friends. They are parents and children, grandparents and grandchildren, school clubs and their teachers. Everyone is brought together with awareness of the common goal, a shared experience where there is a clear framework and expectations for the individual. This relationship work requires different insights and different views of the group to which our interpreters pay special attention. There must be overview and outlook, timely care and at the same time the focus must be on the very close and intimate. In Sagnlandet Lejre, we describe this special attention on crowds, as “hawk eyes” and “laser vision”. As an educational term, one would call it class leadership, in Sagnlandet’s term it is host-ship and crowd-control. The interpreters constantly communicate nonverbally with each other with their body language and facial expressions, showing each other what they want to happen and putting words into the actions. The interpreters get involved and, together with the audience, co-create a common "war experience", while also taking care of everyone. Therefore, interpreters continuously shift their focus by moving between roles. They go in and out of the crowd, between distance, attendance and empathy to be instructors, stabilizing shield fighters, a minor child's bodyguard, or an experienced warrior's good friend and kingsman.

In all courses, there are several elements, divided into different phases. We deliberately use stage changes and tempo changes, and different degrees of involvement of our visitors. There is a beginning, a middle and an end. In the children’s battle we, therefore, also work in 3 phases with a narrative and active communication as a guideline and link.

This is planned in advance that is some preparations have been made to create a good framework and a good dissemination space. Our visitors feel welcome, they are anticipating with curiosity and motivation what the next few hours will bring. The session begins with a story from the time of the legendary kings, preferably in relation to old Lejre. Connections are made to archaeological remains, historical sources and the construction of the coming King's Hall. The story is used as a prelude, a warm-up that acts as a mood-setter which moves our visitors into a different time. The interpreter is in dialogue with our visitors and actively engages both the other interpreters and our visitors in the narrative. The storytelling and weapons demonstration is performed by two or three Viking warriors, playing against each other and through this introduce the audience to reconstructions of weapons and other equipment from the Viking Age.

The starting point for this is weapon finds, images from stone carvings, tapestries, jewellery, bracteates, and descriptions and stories from legends and legislative texts. Damaged and fractured bones and skulls from archaeological finds bear testimony to the violent behaviour and acts of war enacted in the past. How these injuries can be inflicted has been tested by scientists and contemporary Viking reenactors who, through experimental archaeology, have tried to recreate the combat situation or emulate the fighting techniques that will inflict the same damage on the opponent. In addition, this includes experiments on which weapon was used in performing the heinous act. Fortunately, this is done in safe and protective conditions where the involved participants do not sustain severe wounds and lasting injuries.

The knowledge we have developed is tested and handled by the three warriors. Blood is flowing, bodies are cleaved by Dane axes and bodies protected against spear throws by shields. In the play fight in Sagnlandet, you die with a smile on your face. Historical and archaeological source material which support the dissemination is put into speech and action, and the interpreters are ensuring connections are made between the previous storytelling and upcoming children’s battle.

While the first phase is stimulating the senses, the next phase brings the body into play. We do this with an engaging and tangible communication. Now it is our visitors who get shields in their hands. They practice making a shield wall, standing shoulder to shoulder next to each other and protecting themselves, the person next to them and those behind them. You must find your place, the right foot position to stand strong and withstand the pushing and pressure of an opponent. The individual has to feel like an important and integral part of the shield wall. Some are given responsibility for a shield and sword, spear or Dane axe. Others are supporting with their hands from behind, especially when there are small children in between the people with shields. Everyone contributes with their own role to the community, including the audience which sits on the benches and follows with interest.

The group is split into two, facing each other in two lines. All at once there are two teams. It provides a sense of belonging and willpower. The interpreters rile up the two groups with an encouraging battle cry: “are you ready?" And are they? A big resounding "YEEES" is the answer; and the audience is too! The interpreters "stir up" a fight, but they are subsequently urging control and calm. Everyone is standing in excitement and readiness. Weapons are kept still, swords rest at the shoulder or the shield’s edge while the warriors breathe and find their inner calm. It can be felt in the body, all the way to the fingertips and at the tip of the toes, when the inner Fenris has to be tamed. The silence lowers over the looming battlefield... and then it begins! A little smile is drawn when the phrase “…. and then you see two terrifying armies cautiously approaching one another,” echoes across the battlefield. They are terrified and ready, but also cautious. There are good reasons why Sagnlandet Lejre use soft weapons; care has to be taken. When the shield wall collapses, one starts over. No one is dead, no one is injured. Itis just a game. The crowd cheers and applauds when the shield wall does not crumble. It is a precious and treasured moment.

The new army is so busy that they do not detect that an interpreter on a recruitment campaign has gathered parents, educators and grandparents to be archers behind the fortress. They practice, hidden away behind the straw fortress. Up on the fortress wall there now is a warlord striding importantly back and forth, and little by little he starts to mock the people. Now another strategy is needed. Such a fortress cannot be beaten with a line of shields. Now the shields must be used to create cover from overhead attacks as well. One never knows which weapon the warlord can procure. It can be both stone and arrows. So now the shields should be used as protection, just like a roof.

The new archers are allowed to shoot with the bow and arrow after their children take shelter behind and under the shields against the onslaught of arrows hailing down. Their willpower, supported by a ladder, is needed when it comes to melée combat in order to seize the straw fortress. The straw fortress is always taken when the warlord eventually gives in and surrenders. It gives the children a feeling of success and achievement.

The session ends with a serious talk in which the realities of the war in relation to death and mutilation at that time and now are put into perspective. There is room for reflection and commentary. Both adults and children can relate to the fact that war is one of the ugliest things people have created, and a lack of world peace leads to tears flowing down their cheeks. Thoughts on what creates war -  dissatisfaction and the fact that we do not talk nicely to each other - is reflected upon.

At the end of the serious talk, one of the warriors shouts. He is acting injured. This way we direct the audience onwards in the experience, to the sick bench in the camp hospital. The warrior, with the help of all the children, will be patched up with reconstructions of medical equipment from the Illerup Ådal finds. Here it is touching to see the young people's empathy and care for the wounded warrior, even though he just mocked and fought them during battle. His hand is held and he is being comforted. 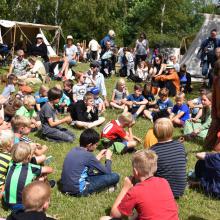 Fig 1. Chatting together. Picture by:… 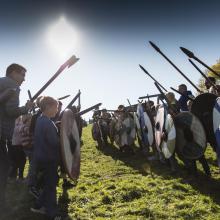 Fig 2. And then you see to scarry… 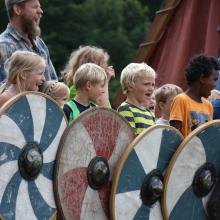 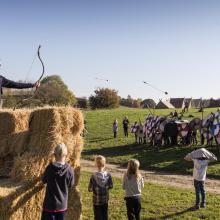 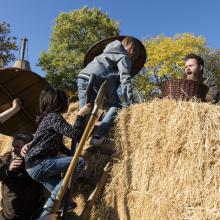 Fig 6. The castle of the Legend-King-… 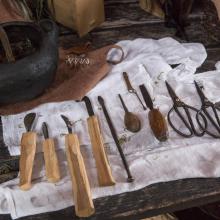 Fig 8. Surgery in the field, Illerup.… 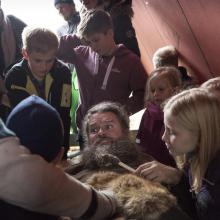 Fig 9. Rollo on the surgery table.… 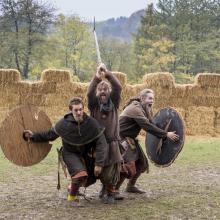 Discussion: Inclusivity in historical interpretation: Who has access and who is erased?
Conference Review: Once upon a Time... in Kernave
For the Reader’s Sake: Publishing Experimental Archaeology
120 Years of Strategies and Experiences in Educational and Handicraft Skills
Conference Review: Didarchtik’s Final Workshop at Butser