One of the arguments proposed for interpreting the Neolithic site of Okhta as a settlement is the fact that potsherds found upon the site show no signs of rounding. Interpretation of the site as a settlement correlates poorly with the geological data, which suggests that, in the Neolithic period, the site was the bottom of a shallow bay of the Littorina Sea into which Paleo-Okhta and Paleo-Tosna flowed. The territory of the site was used as a fishing place by the Neolithic people. To test whether potsherds are rounded by water movement in the estuary zone, a potsherd was placed in the bottom of the estuary of the Morye river – that can be considered as an analog to the of Paleo-Okhta river. After seven days, the potsherd demonstrated no signs of rounding, while a potsherd placed in a rocky bottom exposed to breaking waves demonstrated noticeable signs of rounding after only four days. Thus, the absence of signs of rounding cannot be used as an argument that unrounded potsherds from the Neolithic site of Okhta originate from a settlement but not from an ancient fishing place.

A rocky bottom exposed to breaking waves is an ideal case. In such a place, potsherds will demonstrate noticeable signs of rounding in a very short time. The case of rocky bottom forms the control in which the results of other experiments can be interpreted.

Introduction to the problem

The Neolithic site of Okhta 1 (4th – 3rd millennia BC) is usually interpreted as a settlement by the archaeologists who excavated it (Gusentsova and Sorokin, 2011, p.421). The site was declared to be a settlement by default.

Interpretation of the site as a settlement correlates poorly with the conclusions made by geologists. Geological research of the site has shown that the site could not be a settlement in the Neolithic period since it was the bottom of a shallow and narrow bay of the Littorina Sea, with two rivers flowing into it: the Paleo-Okhta and Paleo-Tosna rivers (Nikitin, 2010; see also Figures 1 and 2). The site was used as a fishing place by Neolithic people. Remains of fish weirs were found on the site (Bazarova, et al., 2011), and above the layers with Neolithic finds are layers that were also formed underwater. In the layers lying above the layers with Neolithic finds, there are traces of hygrophyte roots (mainly reed). The closer the layer is to our time, the more such traces of hygrophyte roots can be seen. Reed is known to be a water-loving plant, but it grows in shallow water, rarely found at depths of more than one and a half meters. Thus there was a gradual shallowing of the bay (Nikitin, 2010, p.163).

The archaeologists who excavated the site interpreted the fact that potsherds found upon the site demonstrate no signs of rounding by breaking waves or a stream as proof that the potsherds were not underwater but were on dry land (See Figure 3) (Gusentsova and Sorokin, 2011, pp.441-442).

Potsherds that were placed upon the bottom of the estuary of the Paleo-Okhta or close to the estuary on the bottom of the narrow and shallow bay of the Littorina Sea might simply not be affected by the breaking waves. In such a bay, waves that came from the sea were weakened both by the shape of the bay and by the influence of the flows of the rivers. It should also be taken into account that potsherds could possibly be covered by soil brought by the rivers faster than be rounded by the weakened breaking waves.

It is well known that rounding of stones, pieces of brick, glass, and potsherds occurs in rocky areas where breaking waves are strong and also in the rocky beds of fast rivers, but the character of rounding in other conditions  is quite unclear.

The general idea/plan of the experiment is the following: to test whether potsherds will be rounded by breaking waves or a stream or whether they will be covered by soil brought by the river, several potsherds should be  placed in different places in the estuary (and close to the estuary) of the Morye river and observed. The Morye can be considered as an analog of the Paleo-Okhta. For comparison, several potsherds should be  placed in the surf zone of Lake Ladoga outside the estuary zone of Morye. The more experiments that can be made, the more reliable the final conclusions will be.

In the current paper, only the results of some preliminary observations/experiments are described since the full realization of this project requires additional funding as well as special equipment, including an action camera with good resolution for underwater photography and a boat. The project proposes placing many potsherds, and it is much more convenient to place them with a boat.

One of the principal questions of the project is the question of where to find an analog of the Paleo-Okhta. The problem is that the estuary of the Okhta underwent anthropogenic changes (dredging) in late epochs, and therefore for experiments, it makes sense to find a river similar to the Okhta, but with an estuary that has not undergone such anthropogenic changes.  The river Morye resembles the Paleo-Okhta

At first sight the Morye and Okhta rivers are much alike: their estuaries look much alike (See Figures 4 and 5), and their sources are relatively close (See Figure 6). It is, however, more precise to estimate the degree of resemblance of these two rivers by comparing their parameters, in order to provide a less speculative comparison.

Estimation of the degree of resemblance of rivers

To estimate the degree of resemblance of rivers, each of the compared rivers should be, first of all, represented as a set of parameters. Parameters that are taken into account in the current consideration are the following: length of a river, drainage basin, discharge, height of the source, shape of the mouth, width near the mouth, and depth near the mouth.

Table 1. Comparison of parameters of Modern Okhta, Neva, and Morye  (data sources: Voda Rossii, Wikipedia 2022a, 2022b, and author’s own measurements)

And thus, each river can be represented as a vector containing seven parameters.

Values of the correlation index can range from 0 to 1. The higher the value, the more similar the compared objects are.

It is thus possible to estimate degrees of correlation of the Okhta and Neva,  and the Okhta and Morye according to this algorithm.

Parameters of the estuary zone of the Morye

According to the geological data, the Paleo-Okhta flowed into a shallow bay that was a tidal flat with a system of shallows and hollows in places with reed thickets (Nikitin, 2010, p.163). The bay of the Morye demonstrates a similar relief (See Figure 9).

Several potsherds were prepared for the experiments. These were fragments of some vessels that cracked during firing in an open bonfire performed according to the Neolithic technology (See Figure 10). (For more details about the technology of firing, see Akulov and Efimova, 2019).

A small hole was drilled in each potsherd so that it would be possible to tie a sinker. This way the potsherd would not be carried away by the stream or by breaking waves. Optionally a fishing float could also be attached to make it easy to find the potsherd.

Some sherds were tied to snags without any fishing floats. Several such sherds were prepared, but some of them were lost or picked up by fishermen. Because of the significant losses to our sample, there will further be comparisons of representative sherds from each group.

Potsherd in rocky bottom exposed to the breaking waves

First of all, it was important to see what happens to a potsherd on a rocky beach exposed to breaking waves where many rocks are well rounded. How long does it take for a potsherd to demonstrate noticeable signs of rounding?

Potsherd A with sinkers and a fishing float (See Figure 11) was placed upon a rocky bottom close to the shore; the depth there was about 0.2 m – 0.3 m (See Figure 12). This rocky shore was exposed to the breaking waves (See Figure 13).

The experiment showed that the potsherd placed upon a rocky bottom exposed to the breaking waves demonstrates noticeable signs of rounding after only 4 days (See Figure 14).

A rocky bottom exposed to breaking waves is an ideal case. In such a place, potsherds will demonstrate noticeable signs of rounding in a very short time. The case of rocky bottom forms the control in which the results of other experiments can be interpreted.

Potsherd in the estuary of Morye

Potsherd B (See Figure 10) was placed in the estuary of Morye. As was said above (see 2.2), the bottom of Morye is covered by silt, so a potsherd placed there will simply drown in silt and will not show any influence of stream or waves. For the sake of completeness, it would be useful to place a potsherd in the silt and check what happens to it there. That is, however, a potential matter for a future experiment. That is why the potsherd was placed where the silt is replaced by sand (See Figure 15) at a depth of about 0.5 m.

After 7 days in the estuary, the potsherd was not covered by soil, but it had no signs of rounding at all. It has a thin part that would be rounded first but it remained unmodified (See Figure 16).

Thus, we can see that potsherds placed in the estuary of a river upon a sandy bottom demonstrate no signs of rounding, and so the fact of absence of signs of rounding can’t be used as an argument that unrounded potsherds from the Neolithic site of Okhta originate from a settlement, rather from an ancient fishing place. Of course, in order to draw more detailed conclusions, more experiments should be carried out, including longer ones.

Akulov, A. and Efimova, N., 2019. Some results of the reconstruction of the technology of firing of Neolithic pottery of Northwest Russia. Cultural Anthropology and Ethnosemiotics, 5(2), pp.11-21. 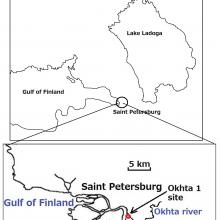 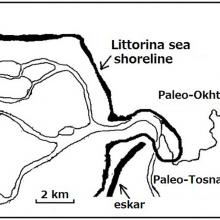 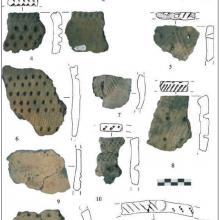 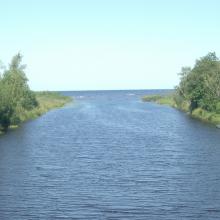 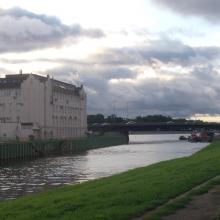 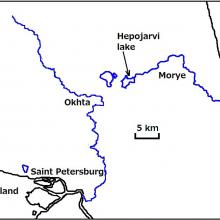 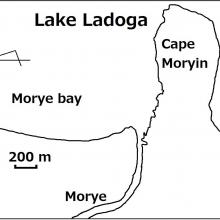 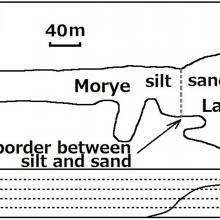 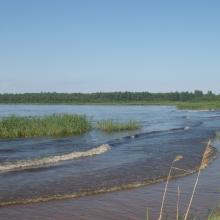 Fig 9. A view near the estuary of Morye… 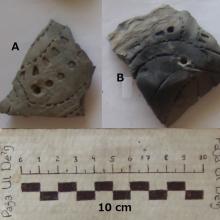 Fig 10. Two potsherds that were used in… 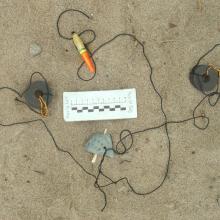 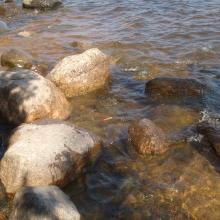 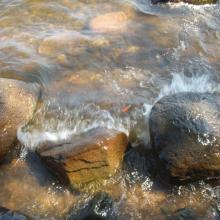 Fig 13. The rocky beach where the… 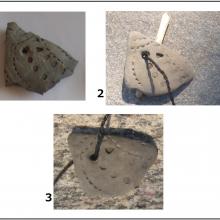 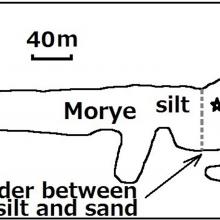 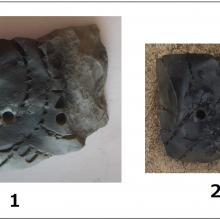 CRAFTER: Potting Techniques of the Bronze Age
The Theory of the Archaeological Raft: Motivation, Method, and Madness in Experimental Archaeology
Scandinavian Iron Age and Early Medieval Ceramic Moulds - Lost Wax or Not or Both?
Experimental Production of High and Late Medieval Pottery at the Scientific Research Centre in Panská Lhota
Event Review: CRAFTER: Back to Bronze Age Craftsmanship: International Meeting of Potters and Archaeologists