The Second Accidental and Experimental Conference was held on 10-12 June 2022 after multiple delays due to the pandemic. This year it was held at the Ancient Technology Centre in Cranbourne, East Dorset, England. The event was organised by Vanessa Castagnino on behalf of the Historical Metallurgy Society (https://historicalmetallurgy.org/).

The event hosted teams of iron smelters from Ireland and Wealdon, in addition to individuals experimenting with smelting and alloying non-ferrous metals.

The Ancient Technology Centre (https://ancienttechnologycentre.com/) has six full sized reconstructions of ancient buildings, each of which represent different periods of British prehistory. Participants who wished to stay on site had the opportunity to stay in the Viking longhouse and presentations were given in the Iron Age Earthouse that is based on excavations on the Isle of Man. The Centre provided ample space for participants to construct furnaces and for the public to see them in action on Sunday’s open day.

The event hosted teams of iron smelters from Ireland and Wealdon, in addition to individuals experimenting with smelting and alloying non-ferrous metals. The variety of bloomery furnaces gave the grounds the appearance of a sculpture garden, however, each provided valuable data in the form of slag, blooms, and furnace design. Non-ferrous experiments included multi-step copper-iron sulphide smelting processes, creating Roman brass using different types of crucibles, and using a self-draughting furnace.

Papers were presented on Saturday. The day began with Tim Young’s discussion of what constitutes a successful smelt for experimental purposes, along with the importance of experience and experiential aspects of smelting. Paul Rondelez spoke about the Furnace Festivals in Ireland. These are ongoing events that began with the recreation of early blast furnaces and have grown to include blacksmithing and sculpture. Giovanna Fregni led an open discussion on pollution caused by copper mining and production, and how experimental archaeology can be both a source and a solution to the problem. After lunch and a brief AGM, papers resumed with an in-depth experimental program on replicating black bronzes by Michael Charlton and a discussion by Giovanna Fregni about her experiments with self-draughting furnaces.

Rather than the usual conference dinner, the HMS hosted a hog roast that included vegan and vegetarian kebabs. This was followed by entertainment in the Earth House provided by Lis Bryant, a traditional storyteller who told legends of Volund, and of the Norse gods.

The first two days of the conference were also spent building furnaces and preparing experiments. Because of the preparatory time needed, most of the experiments were conducted on Sunday. The area around the Ancient Technology Centre was broadly divided between those who were working with iron and those working with non-ferrous metals. The non-ferrous experiments included Fergus Milton’s exploration of Iron Age/Early Roman crucible brass based on artefacts from the 1994 and 1999 Westward House excavations, Giovanna Fregni’s continued experiments with self-draughting furnaces, Nik Kalnins’ bronze casting, and Hayden Scott-Pratt’s research into converting matt, a transitional phase where copper ore is oxidised in order to complete the smelting process. For the ferrous experiments, the Wealdon Group worked to replicate iron slag that is found in their region of study, Mike Tizzard experimented with locally sourced bog iron, and Paul Ronddelez’s team from the Woodford Furnace Festivals in Ireland continued their experiments with two-hour bloom production.

Sunday was also an open day for the Ancient Technology Centre, so the public was invited to come and see the various furnaces in use. Conference attendees spoke to the public about their projects and experiments, and most of the iron smelters timed the removal of blooms so that the public could see the process.

The papers and presentations about the experiments will be published in a planned special edition of the Historical Metallurgy Society Journal. 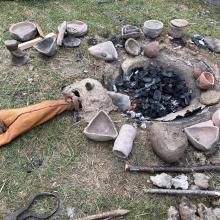 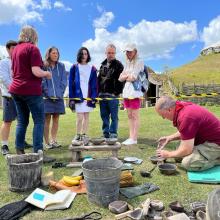 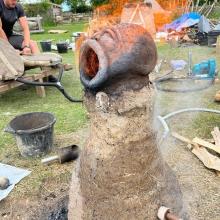