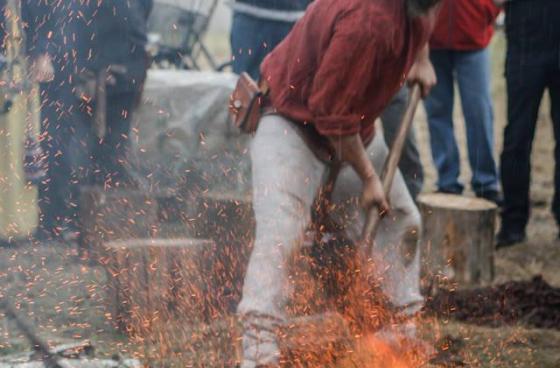 One of the most interesting stages in the history of Świętokrzyskie region was the existence of the largest ancient district of iron metallurgy in central-eastern Europe, on the territory of 800 sq. km. The metallurgical centre on north-eastern peripheries of the Łysogóry mountain range had influence on the area to the north of the Kamienna river, where production enclave is present in the vicinity of the rivers Iłżanka and Krępianka. The beginnings of the metallurgy in the Świętokrzyskie region relate to the final stage of the old era. In the first centuries after Christ, one of the parts of the trade route connecting Roman provinces at the Dunajec river with central Poland was running along the Kamienna river. At this time called the period of Roman influence, especially from 1st to the middle of the 3rd century, in the area of the Świętokrzyskie (Holy Cross) Mountains thousands of pit furnaces originated where iron was obtained from the brown and white iron ores easily available there.

It is highly probable that within a few centuries about 8 thousand tons of iron were produced cumulatively in the Świętokrzyskie centre. The amount was calculated on the basis of the researches conducted by Prof. Kazimierz Bielenin who estimated the number of slag-pit furnaces operating on such an extensive area as about 400 thousand. The real number of furnaces was probably 3 times larger according to the new research.

Since 1967, the research results have been presented during an open-air archaeological festival called Dymarki Świętokrzyskie. The main attraction of the event is the reconstruction of iron smelting process performed at space intentionally separated for conducting experimental demonstrations.

Since 2018 we decided to organize Dymarki Świętokrzyskie Archaeological Festival in mid of July in the Kamienna river basin, where ancient smelters had left many traces of their manufacturing activity and settlement either. The largest deposit of Roman coins (denarii) known from the territory of Middle-European Barbaricum has been found in Nietulisko, pointing out contacts between ancient inhabitants of this area and the Roman Empire. The event is organized in vicinity of the ruins of 19th century rolling-mill, which is itself touristic attraction. Referring to the character of this place, which shows centuries traditions of iron obtaining and processing we have proposed the name “Iron Cradle” that emphasize the difference from  previous festivals containing many pop-cultural and populist accents.

The character of our event has been defined as a result of the programme “Man and Iron in the first centuries of our era” which tends to demonstrate the process of iron smelting with the particular emphasis on historical accuracy of the Roman period. Archaeological presentations of the ancient bloomery combined with craftwork demonstrations of that period and proved by archaeological evidence have been set in precisely prepared scenery including reconstructed tools, ornaments, clothing and weapon dated back to the beginning of the Common Era. The specialists in reconstruction of ancient iron smithing, goldsmithing, bronze work, pottery, antlers processing, weaving, braiding and birch tar making, who are currently contributing to reconstruction of craft and everyday life during the Roman period, have been invited to join the programme. This society caused that Dymarki Świętokrzyskie became the largest festival constantly devoted to ancient times in Poland.

This living history performance is supplemented with presentation of the colours and weapons of Roman legionaries, simulated combats and duels of gladiators which emphasize the differences between barbaric world and the territory of Roman provinces.