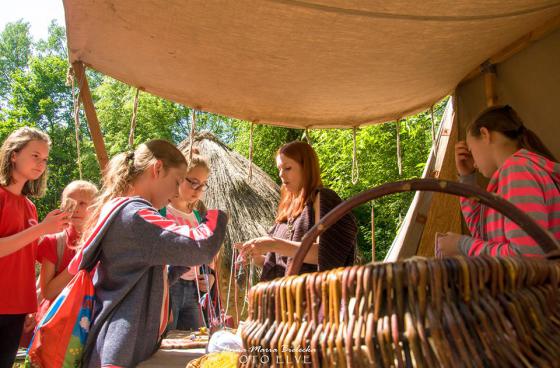 The basin of the Kamienna river has imposed direction of settlement development for thousands of years. The traces of human activity from 10 thousands years ago remained here. The area connected with the settlements from the late stage of the Stone Age received the status of the "Rydno" archaeological reserve. Towards the close of the paleolith groups of hunters dwelling here dealt with flint processing as well as obtaining hematite - ochre used as a dye then. In the Starachowice administrative district we can also trace back the beginnings of farming on our lands on the examples of relics of the people settlement belonging to the "ceramic engraved band culture" discovered in Bukówka in the Pawłów commune. Another significant stage in the history of the Kamienna valley is the settlement of the representatives of "the funnel-shaped cup culture" and "the round amphora culture". The people exploited the famous mines of the striped flint in Krzemionki near Ostrowiec Świętokrzyski. Numerous traces of settlement from the Bronze Age and the early Iron Age have been found on the banks of the Kamienna river and its southern tributaries.
One of the most interesting stages in the history of this area was the existence of the largest ancient district of iron metallurgy in central-eastern Europe, on the territory of 800 sq. km. The bloomer centre on north-eastern peripheries of the Łysogóry mountain range had influence on the area to the north of the Kamienna river, where production enclave is present in the vicinity of the rivers Iłżanka and Krępianka. The beginnings of the iron metallurgy in the Świętokrzyskie region relate to the final stage of the old era. In the first centuries after Christ, one of the parts of the trade route connecting Roman provinces at the Dunajec river with central Poland was running along the Kamienna river. At this time called the period of Roman influence, especially from 1st to the middle of the 3rd century, in the area of the Świętokrzyskie (Holy Cross) Mountains thousands of pit furnaces originated where iron was obtained from the brown and white iron ores easily available there.
Iron Roots refer to the Dymarki Świętokrzyskie festival and has been defined as a result of the programme “Man and Iron in the first centuries of our era” which tends to demonstrate the process of iron smelting with the particular emphasis on historical accuracy of the Roman period. The Dymarki Świętokrzyskie event makes it impossible for everyone interested in ancient metallurgy (i.e. organized groups of students) to participate in it because of the date. Therefore since 2002, we have been organizing a different type of meeting with the Roman period. We called the event "Iron Roots" and from the year 2004 it has taken place in Starachowice on the area of the Nature and Technology Museum in separated place called “Archeopark”. This space enables us to prepare event as workshops where participants can try many methods of ancient crafts and activities or explore “artifacts” in especially prepared “archaeological site” in the course of simulated excavations. Visiting exhibitions of the museum fulfills the rest of the event`s program.