The Historical Metallurgy Society’s Annual Conference, 2-3 September 2010
The Historical Metallurgy Society was established in the early 1970s and is dedicated to providing a forum for the exchange of knowledge and the dissemination of research on the metallurgical practices of the past. This year’s conference, held at the beautiful 19th century estate of West Dean College on the South Downs, was organised by David Dungworth of English Heritage and Roger Doonan of Sheffield University and brought together practitioners and academics involved in the field of experimental archaeometallurgy.

It is hoped that an archive of experimental videos and recordings will be created at Ironbridge Museum.

This year’s conference, held at the beautiful 19th century estate of West Dean College on the South Downs, was organised by David Dungworth of English Heritage and Roger Doonan of Sheffield University and brought together practitioners and academics involved in the field of experimental archaeometallurgy.

The conference was arranged over two days, with oral papers on iron production and theoretical models on Thursday morning and non-ferrous metallurgy on Friday afternoon. Experimental work took place on Thursday afternoon and Friday morning. Papers in session one explored a number of concepts within experimental archaeometallurgy. David Dungworth discussed a variety of issues in modern experimental work, highlighting tensions in the relationship between the scientific methodologies adopted by researchers such as Tylecote, and the more experiential undertakings of more recent experimenters. Roger Doonan built on this by exploring how archaeologists can establish a theoretical framework in which to undertake experimental work, exploring the justifications for experiential approaches.

David Dungworth also raised the spectre of gender bias within the practice of experimental archaeometallurgy. Whilst a gender-gap was not particularly visible in the attendees at the conference, it was remarked that there were only a handful of female experimenters, none of whom were running their own projects. When David asked for responses as to why this might be, the rather predictable response of ‘women aren’t strong enough to undertake iron smelting’ was given by a number of the attendees. Although contradicted by the active involvement of a number of female experimenters and student volunteers, this statement indicates the continued survival of negative stereotypes in British experimental archaeology. Doubtless these attitudes contribute to the apparent hesitancy of women to get actively involved in British experimental archaeology, although judging by the attendees a shift to a more age and gender diverse, if not ethnically diverse, demographic appears to be underway.

Session two incorporated papers on iron metallurgy, with subjects from the Dogon smiths of Mali by Raphaëlle Soulignac of the University of Fribourg, to Anglo-Saxon pattern-welded swords by Tom Birch of Aberdeen University. Indeed all the contributors for session three – which focussed on bronzes, brasses and assaying - were drawn from beyond Britain, and were joined by attendees from the Spain, Ireland, Switzerland, Denmark, the Netherlands and even the USA and Australia. The organisers should be praised for drawing such wide attendance, and the resulting community had a rich variety of experience, opinions and theories, access to which proved to be of considerable benefit to experimenters.

Rather than hosting experiments on a specific theme, the conference took the innovative approach of bringing together a variety of experiments on a wide range of topics within metallurgy. The organisers, in particular David Dungworth, worked hard to create the facilities necessary for the numerous and intensive experiments undertaken. In particular with both experimenters and a substantial number student volunteers welcome on site almost a week before the conference began, there was ample time for the construction of facilities and tools as well as the myriad of labours necessary to support the nine experimental groups operating during the conference.

The experiments were dominated by explorations of archaeologically inspired furnace structures and methods; these included a Romano-British modelled shaft furnace by Roger Doonan; Jake Keen’s 4-5m chimney with a hay-packed slag pit developed from African traditions; the smelting copper oxide ores from Auderley Edge by Simon Timberlake; and Brice Girbal’s exploration of the performance of different bowl furnaces. Also of note was Gerry McDonnell’s experiment in creating cast iron in a bloomery furnace, which appeared to create liquid metal.

Lee Sauder, Shelton Browder and Stephen Mankowski from the US were among some of the most successful experimenters, creating iron blooms on the Wednesday and Thursday afternoons and providing an engaging and informative commentary to their audiences. They also demonstrated an extremely innovative technique for producing small quantities of steel within a very small high temperature enclosure, which has interesting implications for the creation of steel in pre-industrialised societies.

Participants commented on how the close proximity of so many experimenters contributed to an extremely constructive atmosphere and the question of why experimenters do not work together was repeatedly raised. Indeed it seemed quite clear that experimenters work better when together, able to draw on a gestalt of expertise, as well as access additional labour, tools and materials. A repeat of this conference, or a similar organised experimental event, could offer real benefits to experimenters, particularly those with limited experience.

Perhaps the only disadvantage of such a structure is that the experiments did occasionally run towards what David Dungworth identified as ‘theatre’. This is perhaps the inescapable result of presenting 80 enthusiasts with the excitement of successful bloom smelting and smithing. Despite this, it was clear that the conference facilitated experimental work that attendees would have had difficulty undertaking away from the financial and physical support of the conference. This sort of support and advice is vital if the flow of a younger and more diverse demographic into experimental archaeology is to continue, and the conference organisers should be congratulated on their efforts to encourage and incorporate students and early career researchers.

Conference proceedings will be published in the future, and there is currently a call for videos and photographs from the conference to be sent in to HMS. In line with suggestions by Peter Crew, one of the presenters, it is hoped that an archive of experimental videos and recordings will be created at Ironbridge Museum, home of the national slag collection. HMS also plans to release a DVD of the experiments alongside the proceedings, which should describe those aspects of experimentation hard to express with text, as well as being a useful reference for those undertaking their own experimental work. 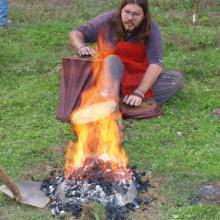 Fig 1. Brice Girbal with one of his… 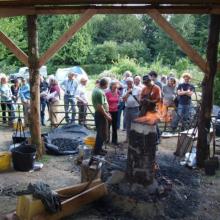 Fig 2. Attendees observing a smelt by… 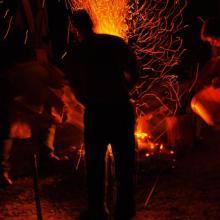 Fig 4. Attendees observe the work of… 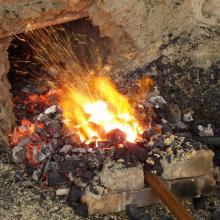 Fig 5. An experiment by Gerry McDonnell… 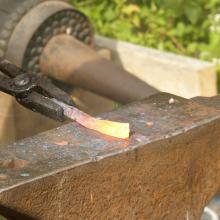 Fig 6. Smithing a bloom down into bars.