The Norwegian Forum for Experimental Archaeology (NFEA) is a yearly seminar aimed at presenting and popularising experimental research within archaeology. It has been held since 2011 at the Veien Cultural Hertage Park, and as the name implies, it is a gathering of Norwegian archaeologists, held and presented in Norwegian.
In 2017, things were done a bit differently.

Conference and seminar organisers often have the tendency to pack as much as possible into one day. Therefore, anyone who has been to a few larger events can testify that these can quickly turn into a seemingly endless stream of presentations, where sooner or later one's mind starts to wander. NFEA Trondheim was not like that.

The 2017 edition was organised by Hands on History in Trondheim and held on 21-23  September. The seminar session on Thursday and Friday was an international event with English as the official language, and with over 40 participants from across Scandinavia and further abroad.  These covered a wide spectrum of (experimental) archaeologists, museum workers, ancient crafts enthusiasts and re-enactors. The seminar was followed by a day of public demonstrations on Saturday, held at the Bishop's Palace of the Trondheim Cathedral.

The first day of the conference was opened by the head of EXARC, Roeland Paardekooper, with a general presentation on the activities of EXARC and on the umbrella term of experimental archaeology. In it, he covered the history, definitions, nature, aims, (sub-)disciplines and related fields of experimental and experiental archaeology. While this may have sounded familiar to those in the audience who had already read a few introduction chapters of publications on experimental archaeology, in light of the refreshingly mixed group of participants it provided a welcome opening.

From here on, the rest of the papers were concerned with specific attempts at reconstructing elements of past lives, technologies and material culture. Simon McCallum (NTNU) and Siri Hjelsvold (University of St. Andrews) presented their work on reconstructing and using traction  trebuchets in a lively and engaging manner.
This was followed by a presentation by NTNU's senior professor Lars Fredrik Stenvik on the years he spent with Arne Espelund, trying to reconstruct the earliest methods of iron production in Norway. While an interesting overview of an enigmatic problem, it did not present any new research beyond a few years back.

The second session of the day was started off by culinary archaeologist Daniel Serra, with a presentation on his methodology for interpreting and reconstructing the food and food culture of societies that did not yet bother with writing cookbooks. This was then built upon with a commentary on the challenges of combining experimental research with public outreach and re-enactment, with the use of large cooking pits at various events as an example.

The presentations were then finished off by Tríona Sørensen of the Viking Ship Museum at Roskilde, with a talk on the original project of reconstructing the Skuldelev 3 Viking boat (1982-4) and the reasons for starting the project anew after 30+ years. In it, she presented the wide range of work, research, dilemmas and challenges faced by the Viking Ship Museum during its activities.

The last part of both seminar days was devoted to a choice of hands-on workshops for the participants. Marc van Hasselt of Novitas Heritage led the project of designing an archaeology themed escape room. Alternatively, Julian Patrick Cadamarteri (NIKU) and Crtomir Lorencic (UCD) presented the challenges of recreating past metalworking processes, while making a model bell foundry based on the medieval finds from Trondheim. Lastly, Per Steinar Breivik and Kai Johansen from the Stiklastadir Medieval Farm demonstrated various medieval woodworking tools and techniques.

The next day start with a presentation in the field: a guided tour of the Restoration Workshops of the Nidaros Cathedral. Here, Espen Sørburø (NDR) presented the methods and challenges of restoring a stone cathedral, which had already gone through many stages of innovation and restoration since medieval times. The visitors could also see the range of artisans that come together in such a large project: stonemasons, builders, blacksmiths, stained glass workers and plasterers, to name a few of those residing at the Restoration Workshops.

This was followed by two final presentations back at the Pilgrim Centre. The first was a talk on the elusive subject of music archaeology by Cajsa Lund (Linnéuniversitet Växjö-Kalmar). The presentation part of the seminar was then concluded by Thor Åge Heiberg (NTNU), talking again about the questions of authenticity in reconstruction, using the case of the small stave church from Haltdalen as an example.

It is exactly the questions of authenticity, the technological and methodological dilemmas of restoration and reconstruction, as well as the problems of sourcing an ever-dwindling supply of appropriate material, which by the end gave a strong theme to the whole seminar. Very similar problems were demonstrated in three compelling case studies: an oak Viking boat, a large soapstone cathedral and a small wooden church. By the end this led to a short discussion between the representatives of projects and the other participants; at this point the whole seminar could have been further improved by a formalised round table or discussion session. Maybe there is some potential at this point for a dedicated conference or seminar.

Saturday was a day of public craft demonstrations and project displays, held at the back of the Archbishop’s Palace of the Nidaros Cathedral. This included giving the public a chance to try out the escape room designed by the participants, as well as the continuation of the woodworking and bronze foundry workshops. Furthermore, the Restoration Workshops of the Nidaros Cathedral demonstrated soapstone turning and lime mortar production, Sofie Kleppe (Jutulskinn) presented aspects of leather tanning, and the organisers, Hands on History, displayed the clothing, equipment and food they make use of on their Viking Hiking experiences. Lastly, Daniel Serra prepared a small feast for everyone involved, with the help of a few members from Trondheim Vikinglag. All of this, combined with some characteristically un-Norwegian balmy autumn weather, made for a very pleasant conference finale, combined with some public outreach.

The main strength of the 2017 edition of NFEA was a well curated approach to participants, which resulted in an almost unusual choice of quality of quantity.

Conference and seminar organisers often have the tendency to pack as much as possible into one day. Therefore, anyone who has been to a few larger events can testify that these can quickly turn into a seemingly endless stream of presentations, where sooner or later one's mind starts to wander. NFEA Trondheim was not like that. A daily dosage of 1-2 presentation sessions of reasonable length followed by a workshop session, intersperced with the usual tea & lunch breaks, made staying focused and interacting with the other participants not only easier, but fun and productive.
What was also refreshing and most pleasing about the presentations given during the seminar was the mixture of pure research, public outreach, education, museum work, heritage preservation and even re-enactment. Several of the presenters definitely had a mixed background in several of these branches. This shows that these aspects can not only coexist, but can (and should) complement each other. All of these can be seen as aspects connected with cultural heritage, and as such they can only fully realise their potential when they get intertwined. This idea was well demonstrated on the last day of the seminar, when an academic event suddenly turned into a public outreach project, reminding us that after and during all the research, we need to interact with the general public as well.

The main drawback of the seminar was already being pointed out towards the end of the seminar:  there is no point keeping this a Norwegian event, since the participants were already an international bunch, covering all of Scandinavia and beyond. Not to forget the fact that research generally improves when it is shared in a wider context. Therefore, there was already talk of turning this into some form of 'Nordic Forum for Experimental Archaeology'.

We shall see what the future brings on that front. 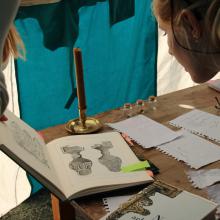 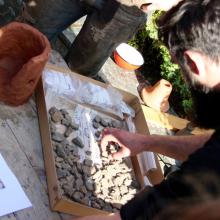 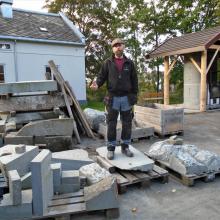 Fig 3. A Question of Raw Materials.… 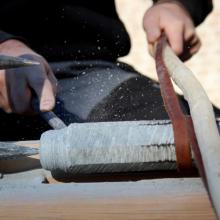 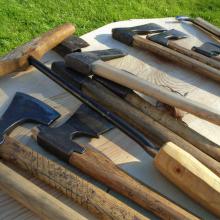 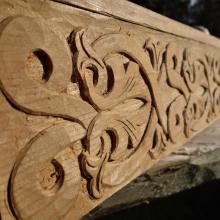 Fig 6. A decorated wooden chest made at… 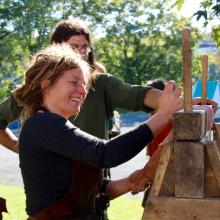 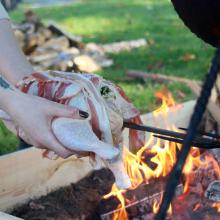