Good news: The first African Conference on Experimental Archaeology (ACE) will be held in Johannesburg on the 20th to the 22nd of March 2018. Join us for presentations, posters, mini-workshops, demonstrations and round-table discussions of experiments in an African context!

Experimental archaeology in Africa is as diverse as the continent itself and applied on an archaeological time scale from the earliest evolution of humans to historical times.

Toronto, 2012: There is a session on experimental archaeology at the Society for Africanist Archaeologists’ biannual conference. While waiting to upload our presentations to the conference laptop, my colleague and I pass the time chatting. “I am sure we could fill a whole conference on experimental archaeology in Africa,” my colleague says. I nod, say that someone will probably initiate such a conference soon and turn to tell the student volunteer where to find my presentation on the USB stick.

Johannesburg, 2016: I am applying for a new postdoctoral fellowship at the University of the Witwatersrand (Wits), Johannesburg. I have been involved in African experimental archaeology since 2009, but someone has not initiated a local conference within this field yet. I feel sure that there is a need for it; I could easily come up with 30 researchers who would be interested in such a conference and a Google Scholar search for experimental archaeology in Africa since 2007 returns 16 000 hits. “Ke nako1 ”, I think, and write in my fellowship application that I will initiate a conference. The results come back in October: I am awarded the fellowship. And that’s how I became “someone”.

Experimental archaeology in Africa is as diverse as the continent itself and applied on an archaeological time scale from the earliest evolution of humans to historical times. For example, knapping and use wear experiments have been conducted to understand the earliest stone tool industries (e.g., McNabb and Kuman, 2015, Semaw, 2006, Toth, 1985, Toth et al., 2006) and fire experiments help us identify the signs of early human control of fire (e.g., Bellomo, 1994, Berna et al., 2012, Gowlett et al., 2017). Experiments examining heat treatment of stones and hafting (e.g., Brown et al., 2009, Wadley et al., 2009, Wadley and Prinsloo, 2014), the use of ochre (e.g., Hodgskiss, 2013, Rifkin, 2015) and the use of personal ornaments (e.g., d'Errico et al., 2015, Vanhaeren et al., 2013) have helped us understand early modern humans and their cognitive capabilities. Moving to the other end of the archaeological time scale, experimental studies, often including ethnographic studies, have helped us understand the processes of bead making, pottery making, iron smelting and food production (e.g., Chirikure, 2013, Iles and Lyaya, 2015, Killick, 2016, Mulder-Heymans, 2002). Indeed, I would argue that one of the responses to the current calls for decolonising archaeology (e.g., Pikirayi, 2015, Schmidt and Pikirayi, 2016) might be to incorporate experimental archaeology and local knowledge into more studies.

After accepting my fellowship, I sent out several emails to find out how other experimental conferences are organised. Luckily, EXARC offered to be a co-organiser and brings much good experience to the table. EXARC has set up our website, is supervising the registration process and will also be represented at the conference by the chairman, associate professor Bill Schindler, Washington College, and secretary, Professor Javier Baena, Universidad Autonoma of Madrid.

Archaeology staff members and students at Wits have volunteered to be part of the local organising committee and are pitching in with ideas for the conference. We have already been fortunate enough to receive a positive answer from two keynote speakers: Honorary Professor Lyn Wadley from the University of the Witwatersrand and Professor Innocent Pikirayi from the University of Pretoria. Wadley is a renowned researcher within the African Middle Stone Age (approximately 300 000 to 25 000 years ago) and Later Stone Age (the last 25 000 years). She has conducted or supervised multiple experiments to further our understanding of the Stone Age and early modern humans. Her work includes heat treatment of rocks and hafting of stone tools (e.g., Wadley, 2005, Wadley, 2013, Wadley and Prinsloo, 2014). Pikirayi won the Humanities Researcher of the Year award in 2014. He integrates his research with community and public engagement approaches with the objective of transforming and decolonising archaeological practice in southern Africa (e.g., Pikirayi, 2015, Schmidt and Pikirayi, 2016). His main research interest is the complex societies in southern Africa after 1000 AD, and particularly Great Zimbabwe, where he has documented water resources (e.g., Pikirayi et al., 2016).

The School of Geography, Archaeology and Environmental Studies (GAES) at the University of the Witwatersrand (Wits) is hosting the conference. The first two days of the conference will be in standard format with posters and presentations at the Wits Club. The Wits Club is situated in the western part of the Wits Braamfontein campus, an area that prior to 1985 was the Rand Show fairgrounds 2 . In 1936, the Western Provinces’ exhibition was housed in buildings designed as a farm in Cape Dutch style, and these buildings are housing the Wits Club today. The club has a restaurant where delegates will have lunch, included in the conference fee, on the first two days of the conference. The club’s conference venue has rooms and facilities for anything between 50 – 300 people, and we hope to fill the space with as many as possible!

The third day of the conference is a day for practical work and in-depth discussions. Participants can demonstrate their skills, discuss important issues and organise mini-workshops on their specialities. We have already confirmed some activities: Dr Jerome Reynard is organising a mini-workshop on bone tool modification, focusing on experimentally reconstructing bone flakes using knapping and other bone-modifying techniques. A workshop on ochre and the use of it is organised by Dr Tammy Hodgskiss. I am organising a round-table discussion on teaching experimental archaeology in Africa, and this will be a half day event so that participants can also catch some of the other events on the day. The current suggestions for demonstrations include bead making, knapping and musket ball making. We hope to receive even more suggestions from prospective participants, and have space to house your event in the GAES seminar rooms, a brand new lab or the outdoor experimental area.

“All work and no play” will not be the motto for the conference, and we are planning social events as well as the conference programme. We will host a welcome reception at the Origins Centre Museum on the Wits campus on the 20th. This museum is dedicated to exploring and celebrating the history of modern humankind, and has an extensive collection of rock art. On the 21st (the second day of the conference), conference delegates get the option to participate in a South African braai (barbeque). There will also be a conference dinner at the Wits Club to end the conference. Participants will, in addition, have the option to stay for an extra day and go on a half day excursion to the Sterkfontein Caves, in the Cradle of Humankind, just outside Johannesburg.

Maybe you want to know who “we” are? Here’s an overview in alphabetical order:

We have set up the website https://exarc.net/meetings/ACE2018, the Facebook page https://www.facebook.com/ACEJoburg/, the Twitter feed @ACEjoburg and the email ACE2018@exarc.net. Ke nako - now it’s time for you to send in your abstracts or register for the first African Conference on Experimental Archaeology – ACE2018. We can’t wait to see you! 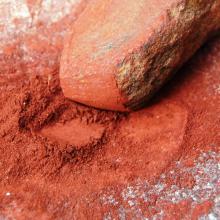 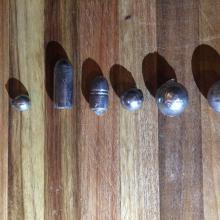 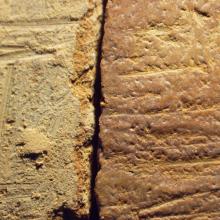 Fig 3. Ochre use traces. Photo by… 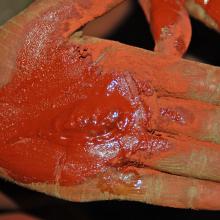 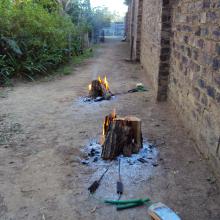 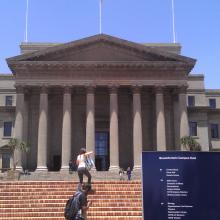